I’m sure I’ve missed this explanation somewhere in the forum, but I seem to be having an issue with exporting higher DPI PNG’s versus uploading SVG’s created in Inkscape. I’m hoping there’s a post somewhere that explains my issue better than I’m about to right now…

So I’ve been doing engravings (non-PG) on several different materials and have had some alignment issues like everyone else (finally stopped being lazy and started using jigs), but my issues lie with the designs. Is there a way to embed an image into an Inkscape SVG (either PNG or JPEG), resize the image to the appropriate size of the engraving (lets say 5" x 5"), ensure that the DPI is set to 600 or something high enough to produce a high quality engrave, save the Inkscape SVG, then upload it to the GFUI for processing (yet still maintain the 5" x 5" size)??

I enjoy using SVG files with the GFUI so that I can cut/score vectors around my bitmaps, but I can’t seem to get the higher DPI quality I need for the bitmaps when I upload the SVG’s to the GFUI. I also don’t like having to export the PNG from Inkscape at a higher DPI because I end up having to manually resize my image (and re-align) it within the GFUI.

I know I’m a noob so there’s probably a very simple fix/explanation that I’ve missed here on the forum, just hoping @Jules or @takitus (you guys know your stuff!) or someone can point me in the right direction.

I only know that 600 DPI would be great if the dot size were that small, but putting an array of 250 dpi dots, at 600 dpi would mean that all the dots would be overlapping each other and then some, making not more detail, but less. The Laser could have as close to zero radius as you could figure but the material it heated up would still be the same minimum radius.

I might not be the best person to ask. The only time I feel it’s necessary to use a really high DPI on an image when engraving is when I’m engraving “Glowforge” on a grain of rice. (No kidding.)

High DPI is important for getting realistic resolution in printed photographs, but I believe it’s actually detrimental in engraving with a laser, because it adds a lot of unnecessary data (causing hang-ups in the buffer and unspecified error messages). I discuss it a little bit in the tutorial linked below:

I generally try to keep the DPI at 300 or less, but if you have dragged a raster (bitmap) image into a program like Illustrator or Inkscape and it started out at 600 DPI, it will be loaded into the SVG file at 600 DPI. (The vector programs can handle them, it just takes a lot longer to load up.)

If you want to increase the “fine” look of the engrave, what you will want to change is the LPI. (Lines per inch.) But be careful not to go too high with those either - increasing the LPI above 195 to 225 causes the machine to burn over areas it has already burned over, so it deepens the engrave and causes more charring, instead of making the image look better.

when I’m engraving “Glowforge” on a grain of rice. (No kidding.)

I would really like to see images of those! Heck, @Dan would love to have a photo of a batch of rice with Glowgorge engraved on each one!

I would really like to see images of those!

[image] [image] The rice grains do not change color when they are engraved, so you need a special backlight and zoom lens for the camera to photograph it. (Otherwise it just looks like rough rice.) This is the best I can get. We need a pro here. Congratulations @dan, @tony, @mark and all of the Glowforge crew…my socks have been blown OFF!

(I actually sent a few of those to Dan, Tony and Mark for the museum.

I can’t speak to Inkscape (so, basically, I’m not helping answer the question at all), but in Illustrator when I rasterize something embedded in an SVG for engraving purposes I always rasterize at 600 DPI. It doesn’t hurt anything, as far as I can tell. The Glowforge software is welcome to use only a subset of those dots, but they’re all there.

If you’re using a LPI that exceeds half of your DPI, you’re asking the system to interpolate data, aren’t you? Same as scaling an image.

I’m in the camp of I don’t believe a high-res image really impacts the ability to process the file because it’s going to spit back out the data needed to do the job.

In other words, a 200 DPI image won’t be any more taxing that a 400 DPI image as far as the output file. It has to send the data for each step no matter what.

I think you can run into file size upload limits but I don’t know what those are.

Regardless of the DPI you use in your source image the GF will have to resample and interpolate because the actual LPI numbers are not integers and cannot be expressed exactly in decimal fractions. They are numbers like 1354.6666666…

And yes the output file size is not affected by the input file DPI or contents, only the time it takes to run.

The horizontal output DPI is inversely proportional to speed when using vary power because it uses PWM at 1.25kHz.

I’m in the camp of I don’t believe a high-res image really impacts the ability to process the file because it’s going to spit back out the data needed to do the job.

I can’t speak intelligently about how the GUI processes things, but in my experience this is true. I save my rasters at 600dpi and haven’t had any trouble getting them to process so far.

Maybe this will better illustrate my issue: 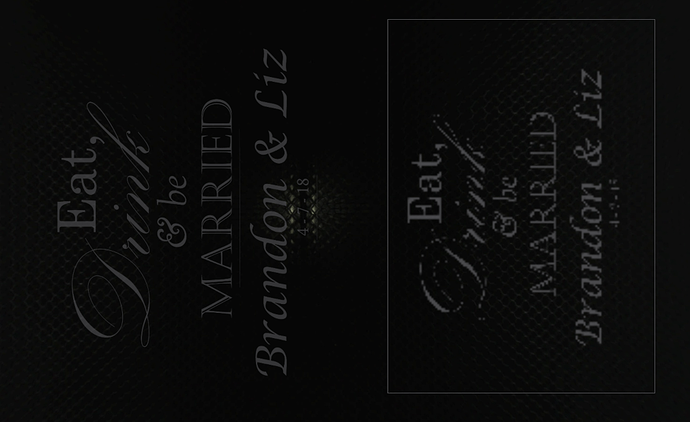 The file on the left is a PNG that I exported from Inkscape using 600 DPI.

The file on the right is an SVG file with that same PNG imported (from file, Smooth, Embed) with a rectangular border around it that I wanted to use as a score.

You’ll notice the text in the SVG is very grainy and does not laser well. Am I doing something terribly wrong?

Whoops…that’s a known bug in the system - if you rotate a bitmap image before saving it in an SVG, it tends to fail.

The way around it is to RE-rasterize the image after it is rotated. So once you have it in the correct orientation, turn it into a bitmap copy again.

Ahhhh thank you! I rotate a lot of my images, this answers everything. I will test it out tomorrow but I’m sure that’s my problem.

I tend to preprocess my images in either gimp (big edits) or fast stone image viewer (simple rotates and rescales/resample).

Yeah, don’t rotate imported images in inkscape, badness ensues. In fact the only thing I do is final resizing and even then only scaling. I wouldn’t advise changing the aspect ratio. A dedicated raster image editor will serve you better.

Thanks for the answer, @Jules, that’s right! @rhlinder, could you please let me know if this helped?

Hello Vee. I’m still having a bit of trouble with this, but I have been able to find a work-around for most of my images. It seems that I have to use the “trace bitmap” feature in Inkscape if I really want the image to have a higher quality while uploading SVG’s to the GFUI. Even if I save the bitmap exactly how I want it in Corel, it seems that if I import it into Inkscape (so that I can use a cut file as well), it uploads blurry into the GFUI.

I’m most likely doing something wrong, so I will continue to try different ways of uploading/saving bitmaps, etc. and hopefully I will find a working algorithm soon.

Thanks for everyone’s help.

Even if I save the bitmap exactly how I want it in Corel, it seems that if I import it into Inkscape (so that I can use a cut file as well), it uploads blurry into the GFUI.

Why are you doing anything in Inkscape if you’re using Corel? You can do the entire process within Corel and save as an SVG the GFUI can load directly. Several of us use Corel almost exclusively.

Oh really? I just downloaded the Corel trial and am still a noob. Since it sounds like Inkscape is the culprit (I suppose relying on free software was bound to fail in the long run anyway) I’ll definitely stick to Corel-generated SVG’s. Thanks for the heads up.

Yeah, we’re a minority here but there are die-hard Corelers here

You get a couple of benefits - when you save it as an SVG you can have it automatically convert the text to paths so the GFUI can use it and you can still edit it as text in your Corel file.

Also, if you rotate or size bitmaps in Corel, it will be embedded that way in the SVG correctly for the GFUI - you don’t need to worry about resampling the bitmap like you do in other apps (which simply add a tag to the image specifying the rotation in degrees but the GFUI doesn’t handle and results in blurry images).