I cleaned my fan yesterday. It wasn’t clogged, but definitely needed it.

I had a close look and realized there is a design issue with the fan that likely greatly increases the rate of clogging. Namely, the fan has a spiral/curved blade cover on the back of it that is right up against the honeycomb of the duct port itself. That means that a lot of the honeycomb holes are divided by parts of the fan.

You can see it clearly in this image. There is the metal honeycomb, then the black plastic spiral fan housing, then the fan blades behind the housing.

This also makes it significantly more difficult to clean the fan blades.

If at all possible, the vent port really needs to be removable. Having the whole thing screw in or otherwise be removable would be tremendously helpful. In fact, I suspect that fan failure is going to be an issue in the coming months.

This was after cleaning. It was considerably dirty prior to going after it with a shop vac and some q-tips. 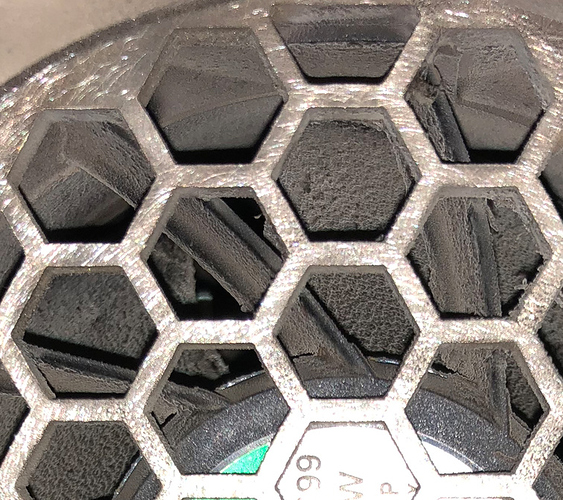 I do not represent GF, and am in no way an expert in ventilation and cooling, but from my experience building and supporting desktop computers for over 30 years, I can offer an opinion - the buildup you see has virtually no impact on the ability of the fan to pull air and particulates from the enclosure. Contrary to popular opinion, it’s the other side of the blades that are actually doing the work, and the obstruction from the motor supports (the spiral pieces you mention) is negligible to the cross-sectional area of flow.

In short, it may appear nasty, but I’ve seen far worse in systems where ventilation and cooling were still more than adequate…

That image was after cleaning.

There are multiple reports on the forum of the buildup being bad enough that the fan was clogged and the movement potentially impaired.

And, in my case, there was section between the fan housing and honeycomb where there was a hole totally blocked.

A bigger issue is that the Glowforge uses several fans to accomplish the desired airflow. This includes two intake fans in addition to the exhaust fan.

@dan has mentioned in the past (relating to discussions about giving users the ability to adjust fan speeds) that the fans are carefully balanced in order to maintain that negative pressure.

All of this makes the air flow/exhaust system rather sensitive to gunk in the trunk, so to speak…

Sorry, I missed that point.

I agree, it would be much better if the fan or screen could be removed for cleaning.

In short, it may appear nasty, but I’ve seen far worse in systems where ventilation and cooling were still more than adequate…

Yep and those PC’s don’t magically shut off at 76F either or 81F for the Pro. Nor do they belch fumes and smoke everywhere when the vents (or on a good PC case, filters) get clogged.

That image was after cleaning.

I’m sure hospitality will be along shortly with some Kool-Aid.

If it was my machine I would cut out the honeycomb grill. It is only a finger guard on the side of the fan that is already guarded somewhat and you never need to run it without the hose attached anyway.

I expect most people will wait for the warranty to expire before hacking it.

So I mentioned this in other posts but I think when we get our laser tubes replaced they should have a car wash for your glowforge , they have the open it anyway why I poked around and clean the fan for us…i would pay extra!!

Thanks for the suggestions in regards to the exhaust port! I’ll make sure the team gets them.