First attempt at a mold for chocolate

We always have a large thanksgiving dinner (typically 25-35 people) so placecards are helpful for keeping some sense of order. At other large gatherings I have done puzzles, and engraved acrylic place cards:

Second passover option Everything Else

So still trying to come up with the best nameplate option. I have the pyramid/sphinx one, but figured since my wife got back tonight, we’d try another option. Puzzles. I decided to use my own puzzle artwork rather than the built in one, so I could do it all in AI rather than screen layout. [image] This might be a fun option where everyone has to put them together and figure out where they are sitting, then they get to keep the puzzle. my only complaint on this one is a LOT of blowback snuck…

However this year, I decided that chocolate placecards would be a great project. So I started with

Thick clear acrylic. and in AI make the text a compound path in a filled black rounded rectangle so the name would stand up. I increased the power a smidge as I wanted deep letters. In the end the letters stand about 2mm above the card.

I then took each of the rectangles and placed it on the bed of my vacuum former, and using the food-safe sheets (polypropylene?) I formed them. I misread the temperature settings for the plastic sheets so it got a bit over-baked which led to the wrinkles (it was bowing at least 4" below the frame - oops, and I will remold it (since that takes only a couple of minutes). But the molds look great. I didn’t even remove the masking paper and it stayed on through the molding process without a problem.

I was originally going to 3D print the bucks, so I could put a 2-degree draft angle in, but that would have taken days, as opposed to this is pretty fast. and I had no problem getting the bucks out. (the nice thing is thick acrylic will yield a tough block of chocolate which is less likely to break. 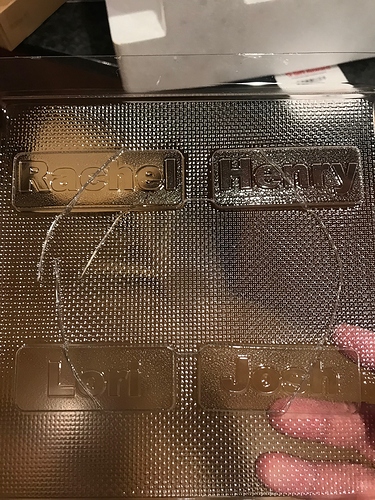 You always do the coolest placecards!

You always do the coolest placecards!

I was inspired this year by my wife buying brain molds like this and making chocolate brains for our halloween party. Figured I could do that! Plus Bill Doran’s Punished Props channel posted a whole bunch of vacuum former stuff in the past couple of weeks.

What a fun idea!