First attempt at some wood inlays

The family is out of town for a little bit so I had some extra time on my hands and figured I’d put it to good use by trying to do some more complex things with the Glowforge. Ok, they’re not necessarily complex but I’m still a complete noob with all of this so they’re complex for me!

I decided to try doing an inlay in wood since I have some projects in mind that I will eventually make that will need me to be able to do this. My wife absolutely loves wolves so I figured that a silhouetted wolf would be a pretty good test design. I got things setup to what I thought would work (ha, yeah right!) and did my first print. It was very loose in the fit and you could pretty easily see gaps in the inlay. That’s not going to work. I went back to inscape and adjusted a few things here and there and tried again. Better but still not good enough. If I’m going to give it to my wife, then I want it to be REALLY good.

I figured I’d just wind up wasting material if I kept going without really knowing what I was doing so I did some search in the forum and found a fantastic PDF by @Jules that explained how to properly adjust for kerf using Inkscape. I followed the instructions but had another bad print as the inset was too large and just wouldn’t fit. Hmmmm. I thought about it a bit and decided that the kerf number I had put in was too big and that I needed to cut it in half again, so I did and hit print again. This time, success!! Not just success but a perfect fit success! After about 5 or 6 failures, I was just giddy that 1, it turned out the way I wanted and 2, I actually understand how to consistently reproduce the steps for any other design on any material (or so I think!).

I used some satin spray finish on the first piece and while waiting for it to dry, decided that I wanted to do 2 more and finish them in Danish oil. So I made two more, both with walnut but one with yellowheart and the other padauk for the inlay. I gambled on kerf being right for the padauk, which it wasn’t really. It was really tight and I broke the weak super-small piece on the bottom left. I eventually got it in there but I really should have gone back and properly done the kerf for that stuff. I’m not always the most patient person

So here is the final product, well, the two pieces finished with the Danish oil. The satin spray on poly is currently drying from it’s 3rd coat on the front side. I added some holes on the top so she can hang them in our “garden window” where she has a bunch of her indoor plants. 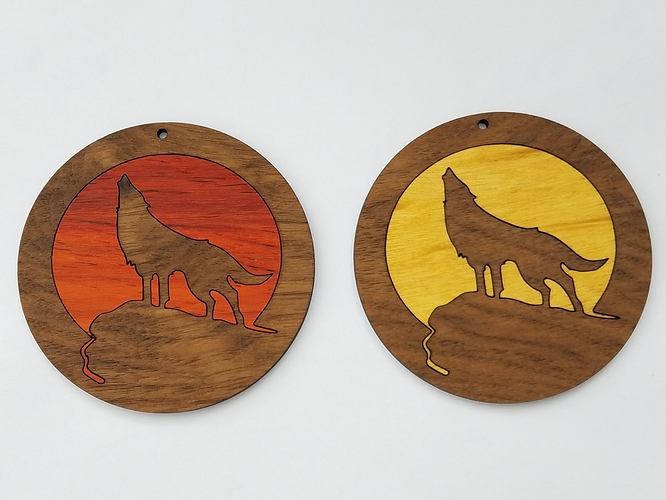 Thanks so much for your instructions on adjusting for kerf! The only thing I did differently was to divide my “kerf” number by 2 a second time when I entered it into the stroke width. I had made the small test box and the cut box was 13.5 and the hole 14mm, divided the difference by 2 to get a kerf number of .25mm. My print with that had the inlay being too big. So I divided the kerf number by 2 to get 12.5 and that was the perfect size. I had it in my head why I think it should really be divided by 4 earlier but now I can’t seem to figure out why I think that’s right. It’s been a long day!

@jules I just read you doc! After looking at these inlays and reading the doc I cannot wait to go try this…first with a square and then a hole to make it fit…then something more complex like @Lotema did!

You actually need to measure the kerf with good calipers, it’s the only way to get accurate results. (And you’re still going to have to fiddle it a little, so don’t get too stressed out about it…usually a couple of small tests is enough to iterate down to it.)

Agreed, I’ve had a few cheap calipers…I picked up a Mitutoyo caliper for my 3D printing and use it all the time!

Yes the digital ones. I love them. I think they were worth the investment!

Great work on the inlay btw!!

Love them. I’m also thinking colored acrylic would look great in a window.

Yeah, i was originally going to make the design smaller, so my wife could hang it from the rear view mirror in her car. The lower left part of the inlay was just too small and fragile, so i had to scale the whole design up. It’s probably a bit too large for the rear view mirror now though, so I figure it can hang in the garden window. After I thought of that, I too thought about the acrylics but the only ones I have on hand are opaque black & orange. Great for Halloween though! I need to order some colored transparent pieces. My wife is just going to kill me for all the materials I’ve been buying. At some point she’s going to demand that I start making and selling things to cover all of this!

I can totally hear that wolf howling from here! Nice work!

Ooooo, lovely medallions! The contrast in those woods is just perfect.

They look so very nice!

Awesome!! I really like these. Good job carrying on until you got the fit just right!!

is there a tutorial somewhere on inlays? how do you engrave to the right depth for the inlay depth?

Really nice looking pieces! I like the padauk one the most, but they’re both lovely!