I found some spare glass tiles that I had leftover from a kitchen backsplash - and decided to test the Glowforge on them.

I cleaned up some r2-d2 fan art and attempted an engrave. I was extra cautious on the settings. I masked the whole piece with blue painters tape. I microwaved the tile for 2m on medium. I did not coat with dishwashing liquid since I had the tape. (I’ll try it that way next time).

It came out pretty good. In indirect light it doesn’t look super impressive because the lines look fuzzy - because of the blurred shadow on the surface behind it.

In direct light (at an angle) it looks pretty amazing - especially the crisp shadow on the back surface. 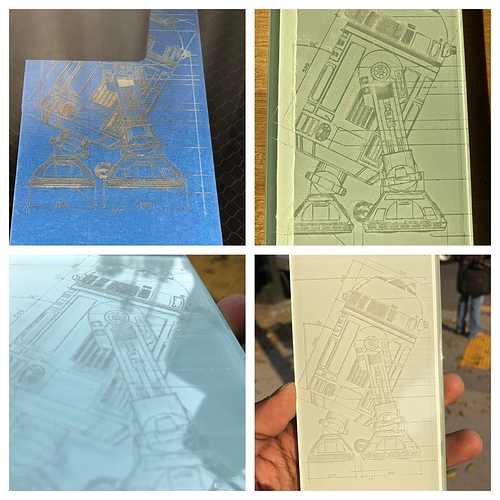 The tiles are these stick-on tiles I got from Amazon. (Warning - once you stick them on anything, you can’t get them off without a heat gun)

If you wanted to make it more visible you could spray paint the engraved area while it is still masked with a darker color, or even just wipe paint over the current tile and it should catch on the engraved areas.

The first method will probably give better results.

Great idea! I’ll try that at some point too.

The second one is not bad at all, and is super easy.

You can probably also wipe marker on and off. Worked for me with regular ceramic tile.

When I had gone to the episode 7 showing there was a guy who had actually built an r2-d2 that was about 3’ tall all remote controlled. It was amazing. This project makes me excited to work with glass!

My next attempt was with no masking and a layer of dishwasher detergent. It looked almost the same but more white - I think because the residue from the painters’ tape picked up and locked in some dirt (I’m sure it’s cleanable).

I’m getting some better masking material for the future.

In the meantime I wanted to see how far I could go with the laser so I did a third pass at full speed (Unfortunately I forgot the other settings and the app did not save them).

Good news - still did not crack the glass! The lines are more defined and less blurry when looking at the surface of the glass. It looks better in real life - I think. But looking at my photos it actually looks kind of nice to see the darker areas on the first - more r2d2 contrast. I’ll keep refining it! 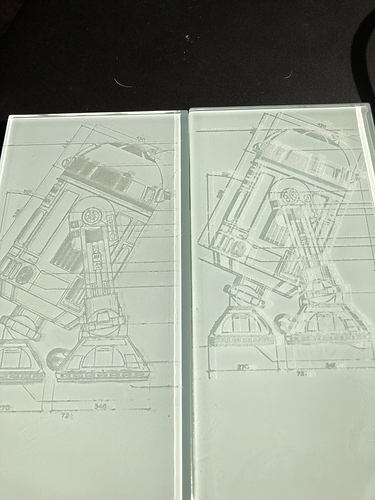 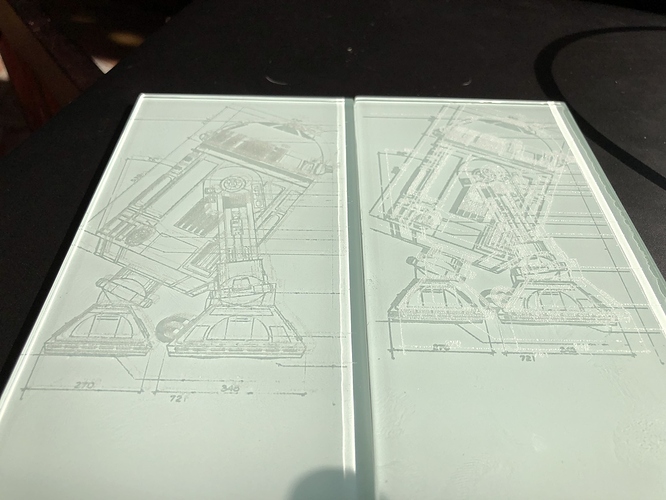 So fantastic, have you thought about redoing this with the paint applied before removing the tape? I feel like it would be amazing!

If you want to try something else, I have seen wet newspaper put on top and then lasered through to give a frosted effect to glass

I haven’t tried paint yet at all! But I want to!

So, with the glass tile (I looked at some at Lowes tonight) … it has a backing and I’m not sure if that is removable or is there to keep the look of the tile uniform. I want to engrave/score the reverse side of the tile (and obviously invert the design) and then file the engraved part with paint for that dramatic look. In the end, I want a name plate for my son as he enters his new position.

Ideas … or just let me go with the time tested trial and error method.

The fun begins Tuesday with the arrival of my SuperForge.

So, with the glass tile (I looked at some at Lowes tonight) … it has a backing and I’m not sure if that is removable or is there to keep the look of the tile uniform. I want to engrave/score the reverse side of the tile (and obviously invert the design) and then file the engraved part with paint for that dramatic look.

It does engrave. I’ve got a post up with some of them I did (I think - I’ll look for it). If it’s the same glass tiles I used the white backing is actually some kind of paint or finish that the laser doesn’t really remove - it turns it black though. Etching on the front works but gives you a shadowed depth/reflection. Let me see if I can find you a link.

EDIT: Here’s the link to my post on the glass tiles I use.

Dispatches from the front (Pre-Release Report) Made on a Glowforge

Messed around a bit playing with some glass tiles from Home Depot. They’re backed with a painted coating that I expected would ablate and leave the scored glass. I was interested in what kind of etching I could get with the glass. [image] Instead of ablating the paint it seemed to melt it into the etch. The view of the back was one I ran at 225 lpi for the etch at 1% power. I saw some striations in the black so bumped it to 5% and 340 lpi for the rest of the experiments. Here’s the back of t…

I’d be really curious if anyone has tried comparison testing the engraving of soda glass vs. borosilicate glass. Since borosilicate is heat resistant, I suspect the same settings would give different results.

Have you tried cutting through one entirely? I ask because I also did a backsplash with these tiles and trying to score the cuts around the trim and edging in my kitchen was a nightmare. It would be awesome if I could actually cut those odd shaped pieces with the laser.

Have not tried that - for some reason I feel like it wouldn’t work, or it might take tons of passes…. My project room is in disaster mode currently, but I’ll get back to experimenting soon!