After a lot of trial and error, I’m really pleased with the final outcome. 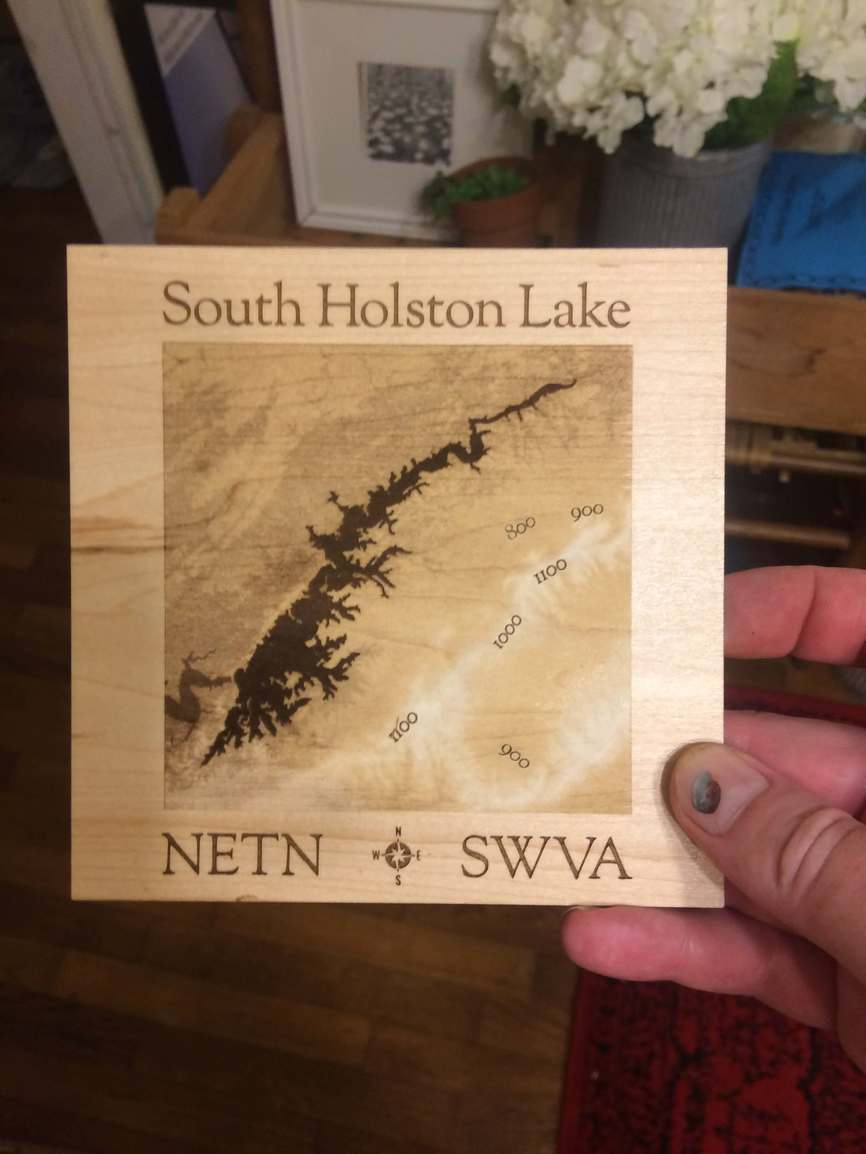 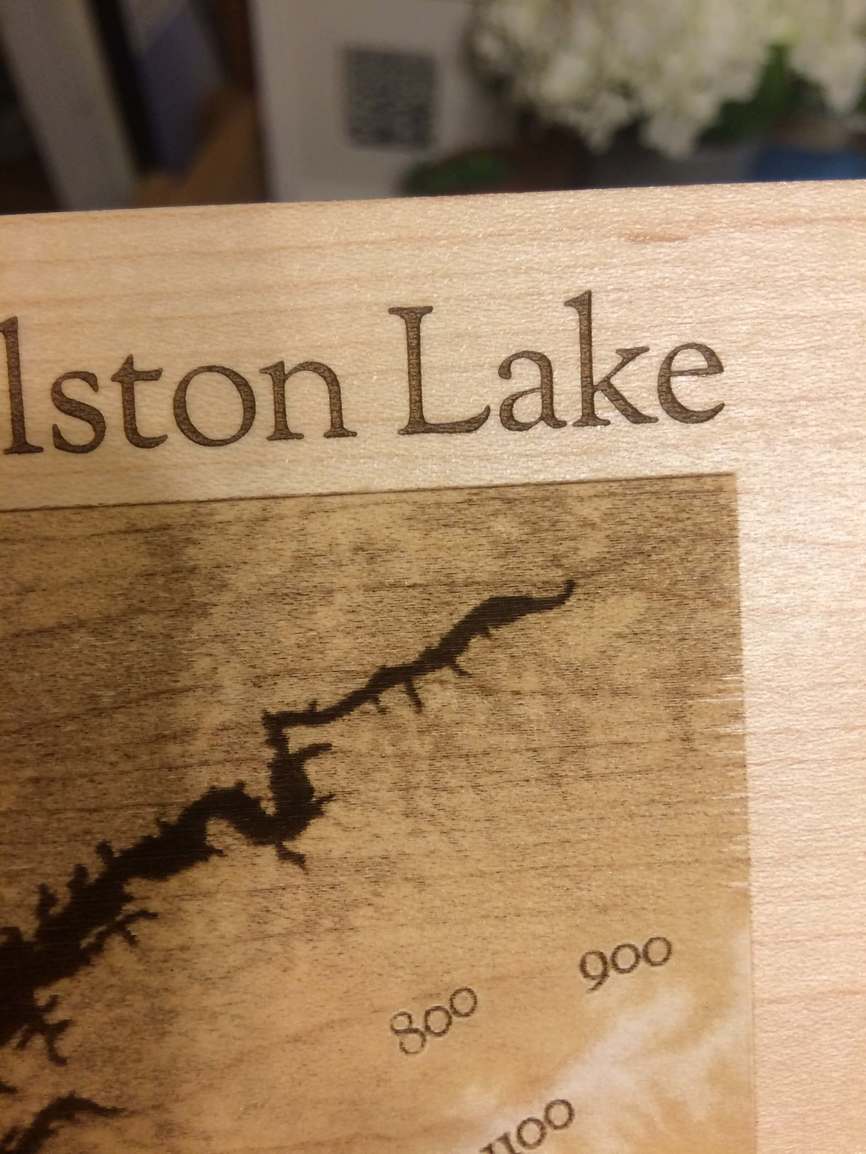 This is a local lake I’m fond of that straddle’s Northeast Tennessee / Southwestern Virginia. Used a height map that I had to posterized, then vectorize, then seriously lighten the tone of everything. IIRC the lowest grey color value I used was a medium grey at #888888. During testing though the lake was vanishing in the elevation. So I made it the only thing that was pure black at #000 to get these results. Look closely and you can see where the dam is located in the lower left and the river flow afterwards. I have versions with road maps and topo lines as well, but at the small test sizes I was originally doing it was just too much. Dido for the original elevation on 1/8" Med. Maple Proofgrade. I’m gonna scale this up and I think the extra road & topo details will work well on a bigger version—that’ll be a later post if successful. Here’s a shot of a small test one that turned out interesting with true depth map. 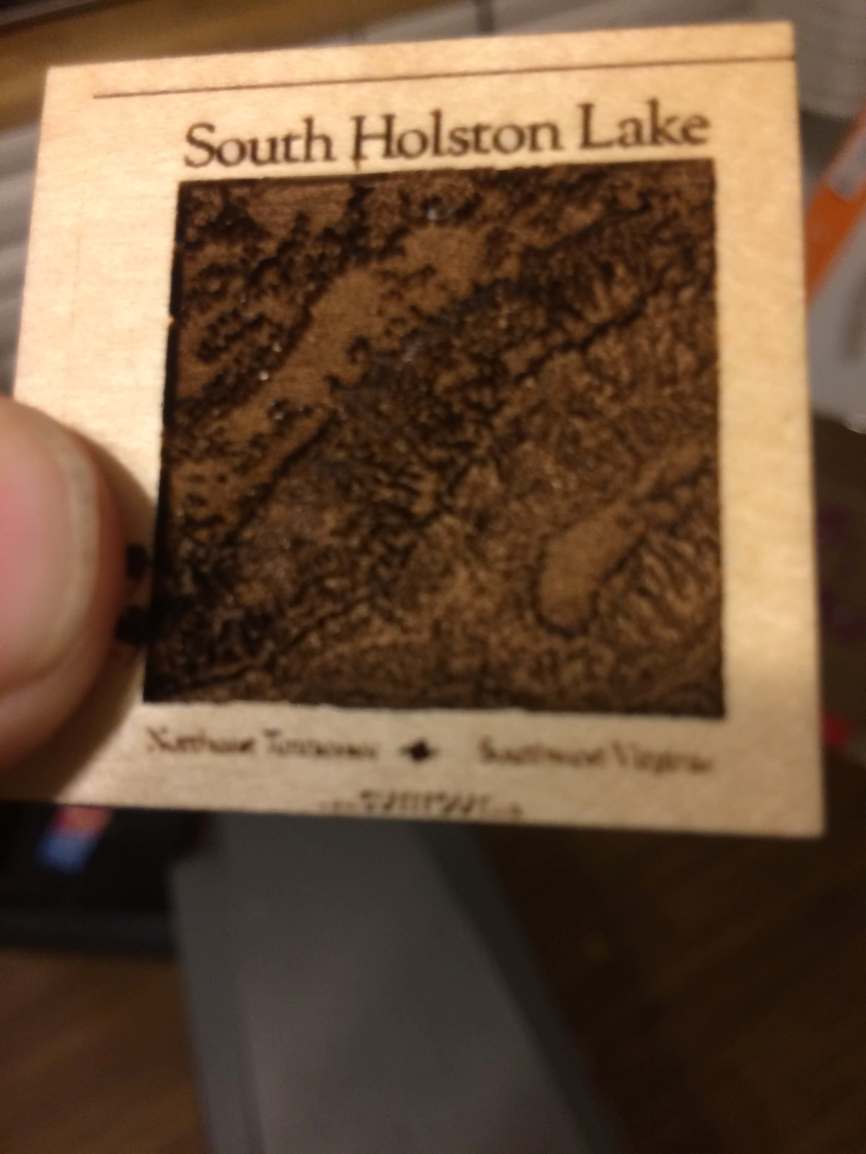 I noticed leaving it as vector made it take f o r e v er vs. flattening it all asa PNG or JPG (doing that to a duplicate later of course, that vector version is to be prized. As for the nearly matching thumbnail coloring—well that just came from all the hard work

Love to hear what you guys think. Critic’s welcome. Any suggestions on pricing for sale would be appreciated too. I’m currently hovering around the $50 mark. To high? To low?
Cheers!

Looks good! Maps are really popular, you can probably sell it at that.

I love maps and am working towards that crispness. Carry on!

Very nice job! Best of luck with them.

Looks good! Maps are a favorite of mine.

Might be interesting to combine the engraving style with the layered topo style that is quite popular!

Just a thought re the topo lines. Might it be possible to score the lines, then fill with a colour, then run the engrave ?

EDIT
I’ve just realised that what I thought were the contour lines are actually wood grain, so are the lines there ?

No, and the only woodgrain is on the left edge towards the top (that I’ve noticed anyway).
I didn’t do the Street or Topo lines either.
What you’re seeing (images #1 & #2) is a very shallow depth engrave made from a “height map” of the area. The way it works is the highest layer—in this case the mountain range in the lower right—is white / top of board plane. From there, it’s gently engraved down to the lowest layer, which is the river after the damn in the lower left. The color range for them went from White to Med. Gray. Then the lake was pure black.
Image #3 is the actual height map I produced that when from white to black being the lowest color.
Detail is insane b/c it’s only like 2 1/2 inches and carved to an accurate elevation scale. Just too much, esp. at this size. Notice too how the lake disappears there, b/c it’s like 2/3 of the depth in reality. That’s why I had to single it out and make only it black. Took several test prints to get the rest right so it was very faint and flat.
I’ve scaled it up and have almost completed 3 versions: The one already posted, a Lake/Street/Topo, and now printing a combo of the two (should be done in a few hours). I’ll post the results when done.
Thanks all for the positive feedback!

Thanks for the reply. I realise now that there is a UK/US confusion on my part !(surprise).
What has always interested me are maps with contour lines showing, generally as a brown line over the pale background colour of the map.
That’s what was in my mind when I saw your post, not topological maps, with the different elevations shown in differing shades of colour.
I’ve never actually seen a US map, in particular my new home area in NE Mississippi, with contour lines. Are they produced in US, or is the topological map the preferred choice ?

Hey John,
What you’re referring to is a topographical map I believe.
That data is freely available in a free program I used to created this called “Maperitive.” You can load any location world-wide, then download OSM data which includes streets, topographical lines, streams, and tons of other details like that. You can also produce the height map I mentioned via “hypsometric” data.
Hope that helps!

Thanks Kev, I’ll start looking for that.
About 50 years ago(no, really) a computer-based careers advisory service suggested that I should become a map maker. funny how things turned out, but even at the time, I could see the sense in their suggestion !
John

Sure, glad to help!
Here’s the link to Maperitive: http://maperitive.net
Free, very techie, but very useful for this type of work.
I work on a Mac, so I’ve got to run a program called “Mono” to make it work—and it’s like pulling teeth b/c it crashes all the time, no copy/paste ability, etc. On PC it doesn’t have those problems.
But I was able to figure out how to use it by googling around and looking at their forums.
This GlowForge thread was alot of help as well.

Thanks again. I’ve grabbed the download, and see that I’ll need Mono as well, as I use Ubuntu(linux). Their link didn’t work, but I’ve plenty of time to get it sorted.
Other things are a bit more pressing, like emigrating to the States by the end of the month !
Cheers,
John