Were re-organizing our workshop and craft rooms, and in the process thought we could use something to hold our glue guns while in use etc, as they are messy.

Screen shot of what the layout looks like. I made the bottom piece in a different color (hard to see here) so that you can cut that separately if you want. Its recommended that you use acrylic for that piece so its easy to peel the melted glue off. 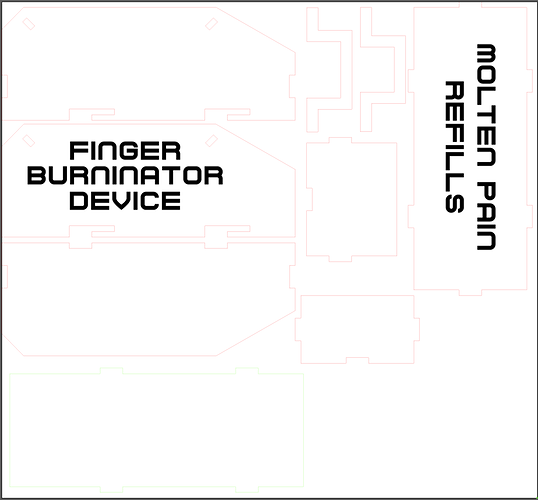 Heres what it looks like built. This is also a big glue gun, small ones should fit too. Prob better than this big one =P. 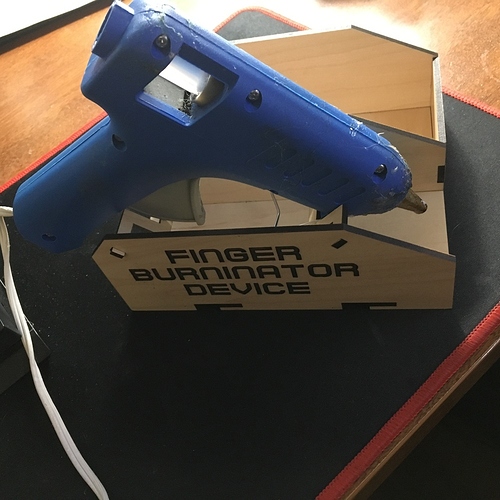 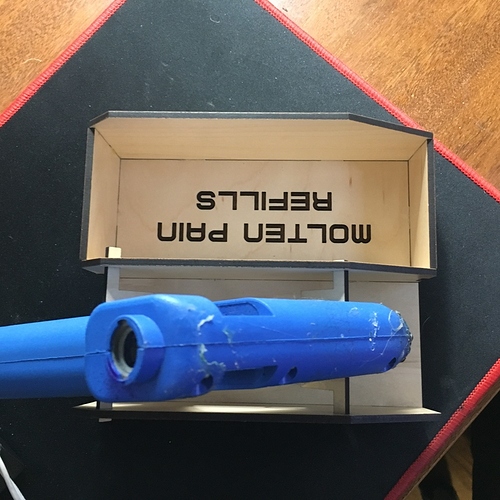 This isnt originally my design. I modified another that was designed for 1/4" wood to make it work with 1/8" ply, and fixed a lot of the small sizing issues it had (larger gun barrel holder, better text, etc). The original can be found at:: http://www.thingiverse.com/thing:1715349 , but it really makes no sense to use 1/4" when 1/8 is so much more common and cheaper.

Had to put it in PDF format for the forums. It wouldnt let me upload an SVG for some reason. If it doesnt work shoot me a message, ill send you the svg. Enjoy!

Oh, I like that design…especially the handy storage for the molten pain refills! (I need more wood!)

Its kinda funny… I picked up some finish ply from lowes the other day. It was more expensive than a sheet of nice ply made for laser engraving(laserbits etc), and engraves terribly. They have about the same surface quality, but I think proofgrade looks a bit nicer tbh. Really happy with the quality of the engraves coming out of it, as well as how consistent the surface is. Its been hit or miss with laserbits stuff (just the bad knotty piece of cedar I got…bleh. the other pieces have been nice).

We’ve got a terrible selection on the ply down here. It’s pretty much Baltic Birch, Pine and Oak, and I’m not sure we are supposed to do oak (are we?) in a laser, and I know not to do pine from the sap we have to dodge on the deck every year.
(Looks like kaka anyway - everything is warped.)

We don’t get much in the way of hardwoods down here.

birch ply is amazing for things like this. any type of construction… it lasers great! Ive made lots of scaffolds etc from birch ply. If its 1/8" itll probably work well for this. If I had enough scraps I would have made this out of birch ply

You can laser oak, it just has a lot of variance in grain density, so its not going to look as good as maple or cherry or some of the other woods when doing deep engraves

We bought the two unwarped sheets they had on hand. (And that was quarter inch.)

Nice! I put a piece of hdpe in the dripping area on the one I built, cleans up great. Hey are you guessing on proofgrade prices or do you have access to buy some of the proofgrade now?

We’ve got a terrible selection on the ply down here. It’s pretty much Baltic Birch, Pine and Oak

I’d be surprised if you got Baltic Birch from a big box home center. They’ll have birch but that’s not the same. Birch veneer plywood is a nice exterior ply but the interior plies suffer the same issues any other species of plywood has.

You know it wasn’t BB if it was available in 4x8 sheets too. Real BB is 5x5. It’s designed for use by cabinet makers. It’s a solid birch core (plies are all birch veneers) and there are no voids.

eh yeah I just said proofgrade because it was habit. I think the packs they sent us with the pre-release units are similar to what will be sent as the $150 gift pack when the release units ship, which you can kinda make an educated guess from.

Love this project and your humor!!

Thanks for the files and nice project ! (what if you zipped the SVG?).

Had to put it in PDF format for the forums. It wouldnt let me upload an SVG for some reason. If it doesnt work shoot me a message, ill send you the svg. Enjoy!

Should be able to right click this image and download the SVG file. Not sure why you couldnt upload it earlier. When I opened the PDF however, only the text was visible. Nothing else had any stroke or fill color applied when imported into either Inkscape or Affinity Designer (had to use the Outline View Mode to see them).

Thanks for the design - that could come in handy and this sort of thing is one of the main reasons I bought into the GF.

So where does one look for real Baltic Birch ply? Somewhere in the west suburban Chicago area would be ideal. Google find lots of sources, but doesn’t return any hits for this area, at least that I can find. Maybe my Google-fu is faulty.

So where does one look for real Baltic Birch ply? Somewhere in the west suburban Chicago area would be ideal.

If you have a Woodcraft store (there’s one in Woodridge/Downers Grove up near Naperville.

Thanks - should have thought of Amazon and $60 for (20) 12x24" pieces of 3mm with shipping seems like a pretty good deal. Most customers gave it a good to excellent rating though a few had issues with flatness and cut quality. Woodcraft may be a good backup source; I’m not sure I trust their quality too much though I’ve only been there a couple of times. I’ve since found Owl Hardwood in Lombard and they sell Baltic Birch in B/BB rating and various sizes. I’m limited to a Dewalt miter saw and an ancient Hammond sliding table saw with pretty meager cutting length capabilities so I’d probably want someone like Owl to cut the stock down to GF-size pieces for most purchases. There’s a more local Mom & Pop place that sells hardwood that I may also try. They could also be a good place for drops that might be useful for engraving.

I’m still a little surprised that Google turned up so little - I must not be searching correctly.

Love the verbage, so accurate!