I’ve always had a bent for modeling and miniatures, and one day as I was admiring the shape of a classic old Beetle and the idea came to me to capture it in a fridge magnet, so I did. 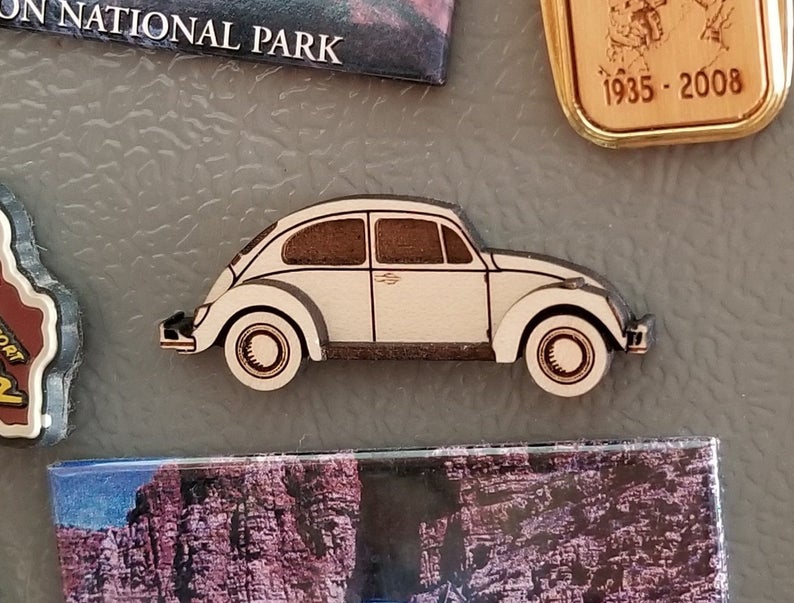 It’s a diminutive guy, at about 2.5 inches. My favorite feature by far is the tiny little running board that goes between the fenders.

I’ve always liked old trucks, with a particular soft spot for the '49 '50 Ford F1’s, so that was my next model. 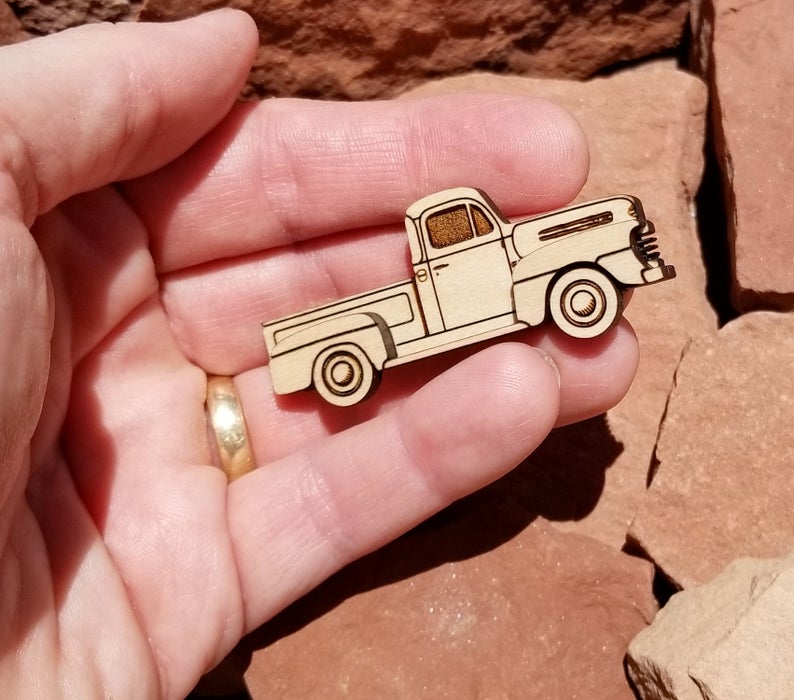 After that, lots of cars came rolling off the line… 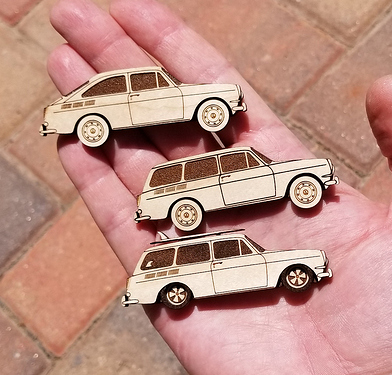 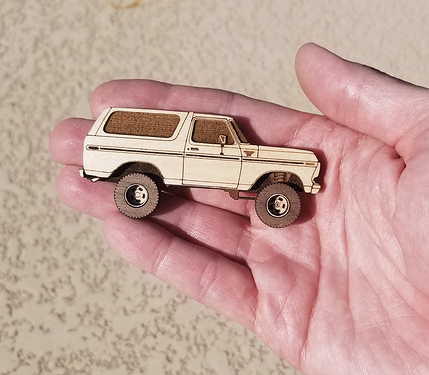 It wasn’t long before I was getting requested models, like this '92 Jeep Wagoneer (with walnut paneling): 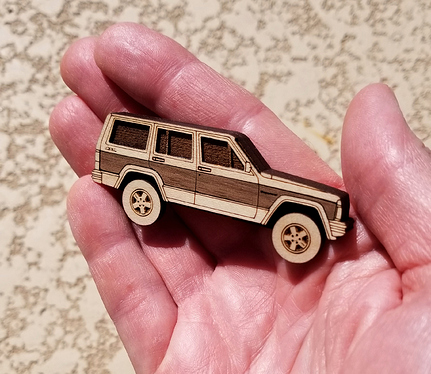 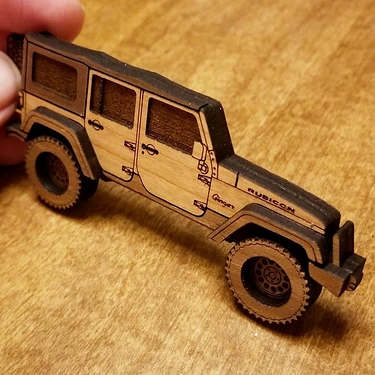 …which led to 2dr models: 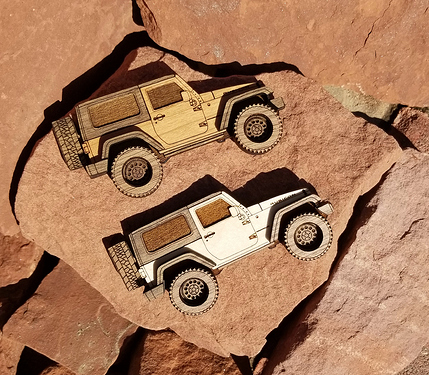 …and a lifted '93 Cherokee with roof rack that I added to the fleet primarily because I want one: 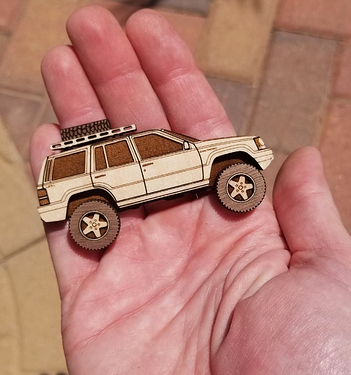 The Bowtie brand has been well represented too, as with this '79 Luv made on request: 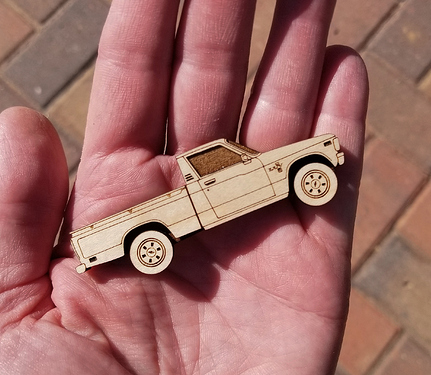 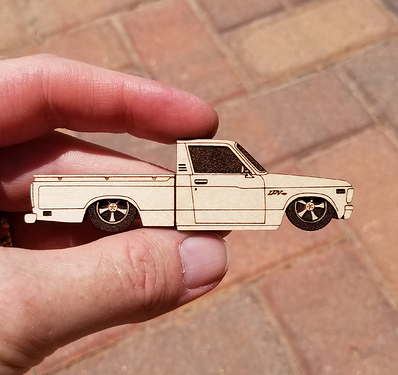 And I’m having fun making grill fridge magnets too.
Like a '72 C10, because I like egg crate grills: 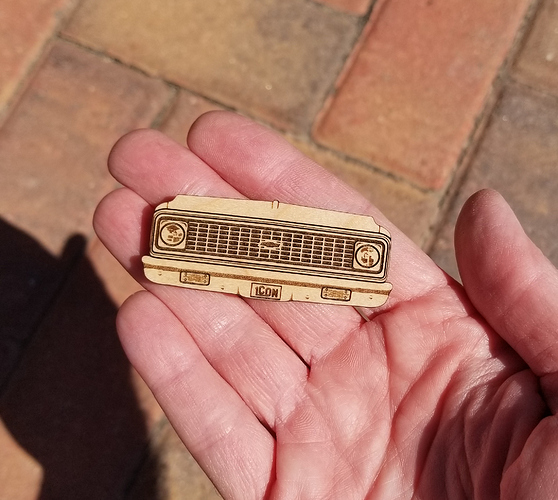 …and the followup, '73 C10 with its really unique character: 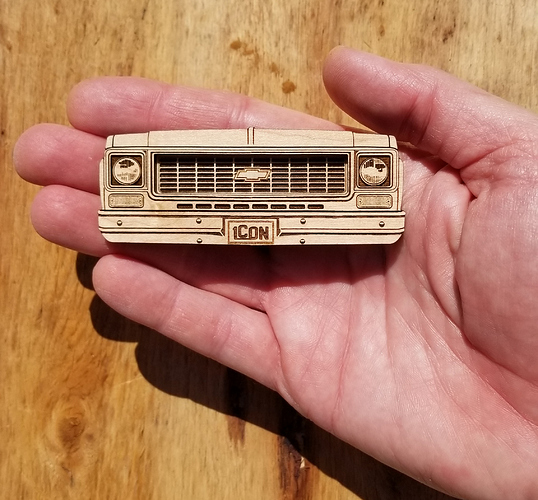 One of the high points of my automotive projects was being asked to reproduce the Drag’n Wag’n, a '66 Chevy drag van, by its original builder and owner after he had looked over my work at a show. He wanted variants that captured the fantasy art on both sides of the exterior as well as an open door variant that showed off the center mounted twin turbo Pontiac big block inside.
He was really pleased with the results: 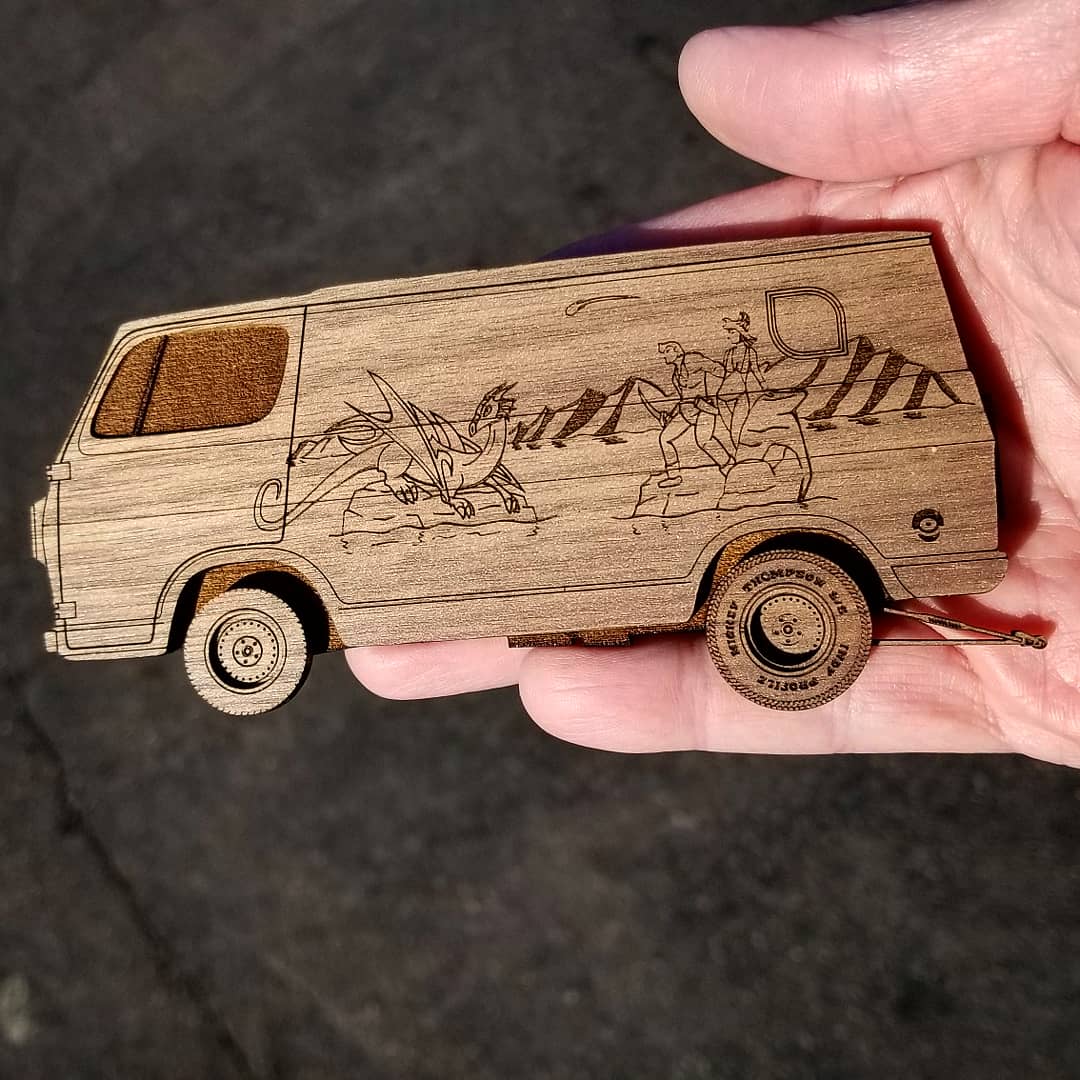 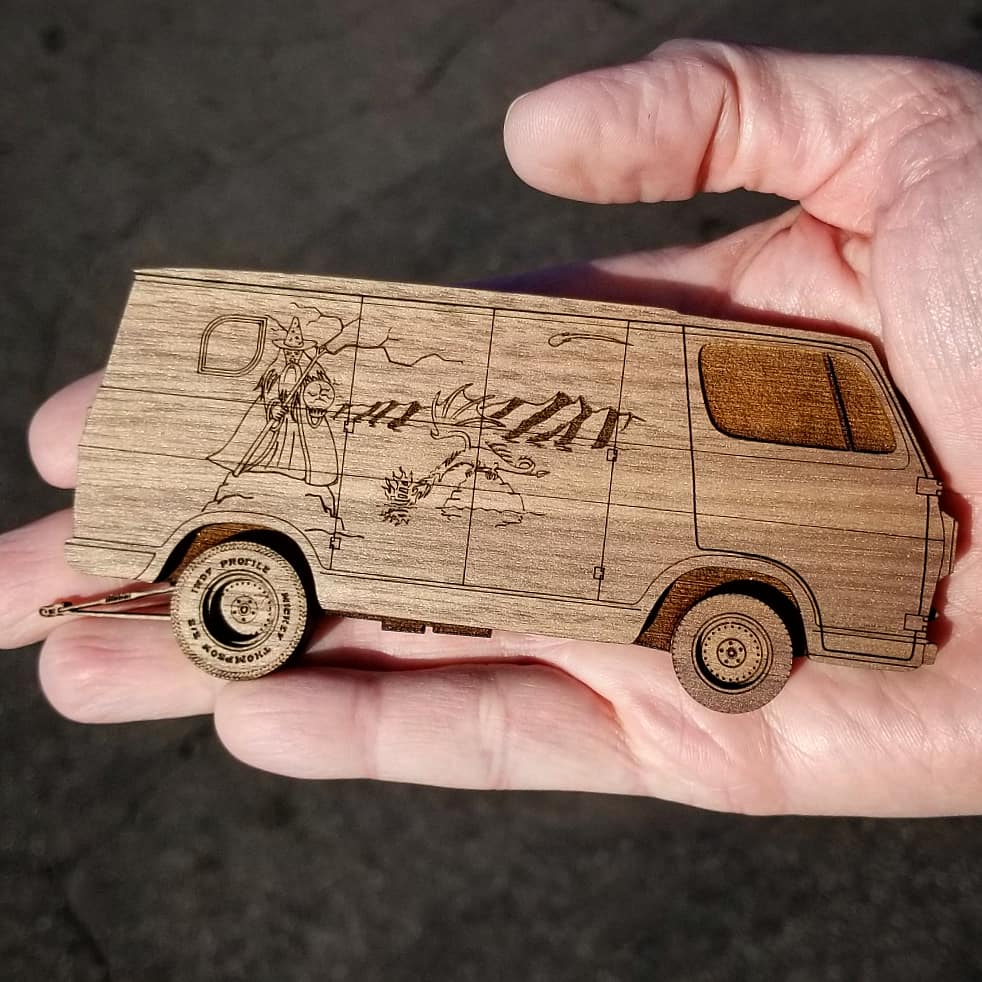 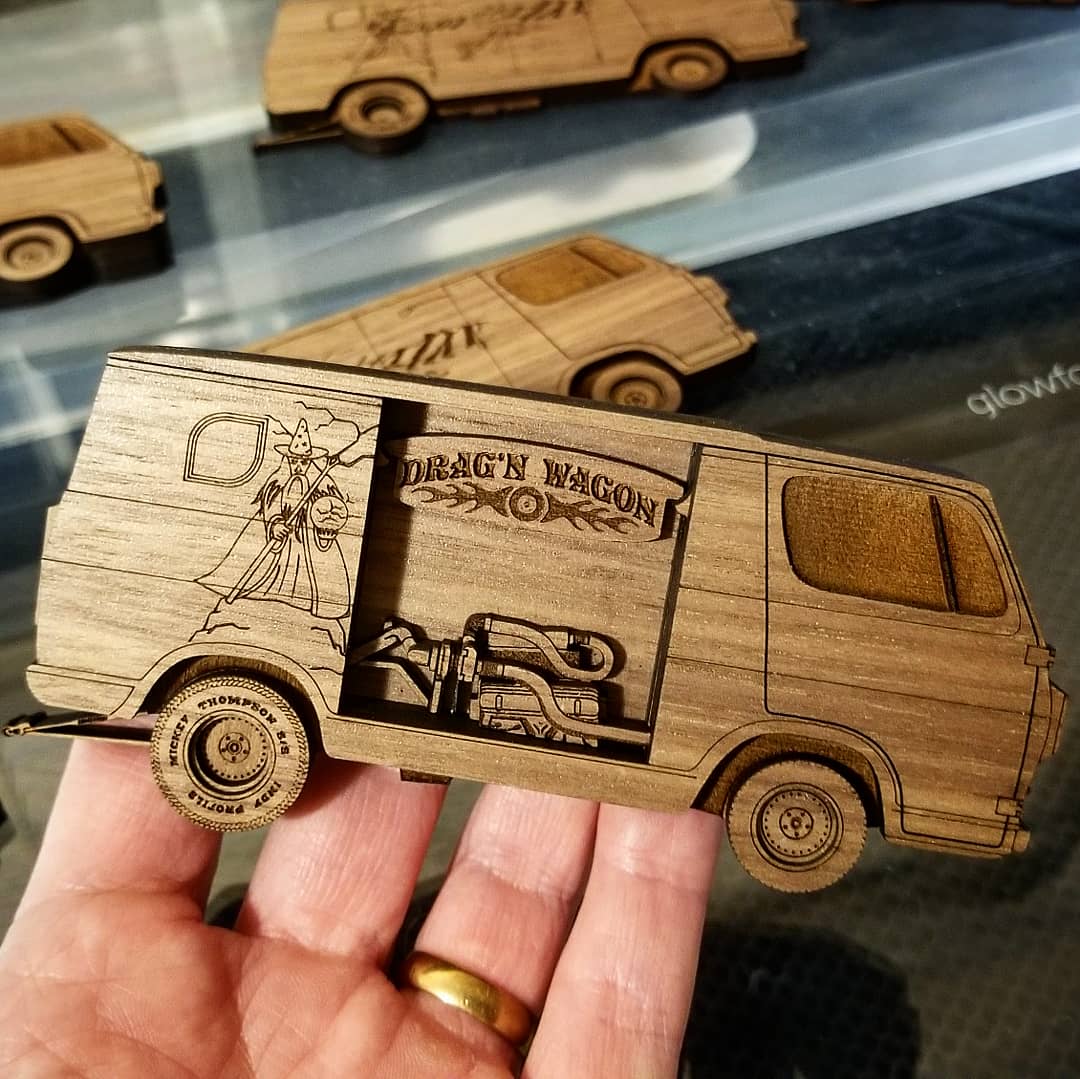 These vans, like the rest, are magnets, and he wound up displaying a couple of them attached to the inside of the real thing at shows, which I took as a high honor.

It’s been challenging but rewarding and fun, working at the micro end of the forge’s abilities, learning and developing techniques to get tiny little details barely wider than a laser beam that I think are important to the character of a piece.

And if you’re interested in owning one, most of these are for sale at my etsy shop, Laser Wheels (laserwheels.etsy.com).

These look excellent. I’ve just snaffled some left over magnet sheet from my grand-daughters toys to play with.

Wow! that is quite a collection!

Was wondering about the old “'40 Ford” curved roof of the VW bug that Volvo introduced in 1924 and still made longer than VW made bugs, making only those changes to increase comfort or safety. I had one with 300k miles that only died when someone else was backing up down the expressway because they missed their exit,

This is a wonderful collection, thanks for showing it off!

These are wonderful. Thank you for sharing.

Let me know when you do a Jurassic Park Rubicon or a Troopy Landcruiser!

You are really able to get some great detail on these. Thanks for the photos.

Those are great, and your details are very nicely done! Thank you for sharing all the pics!

It’s great when you find a vein of gold!

Oh my goodness I adore these!!! We have been throwing around some different ideas for magnets to add to our brick and mortar shop. Your designs are GREAT! You have inspired me to keep learning the ins and outs of just what our GF can do. Once we get our replacement in and back orders caught up, I def want to dig deeper and hone my skills.

(if you think you have approached the smaller end of possibilities, keep in mind someone here won the competition by burning their name on a grain of rice.) Love your designs!

I remember the days when fridge doors were magnetic…

Edit - I should qualify - would make us sad that the cute little projects my daughter would bring home from kindergarden had nowhere to go but the front of the top-load washing machine!