We just moved our glowforge out of the space in our house with our children due to fumes. We are mainly cutting thick draftboard and also purchases the compact filter. It feels like we are breathing in dust almost and anyone around the machine is coughing for hours after breathing it is. It almost feels like you can feel it hitting the back of your throat. Is this normal? I’m a little concerned especially since it is proof grade material.

You are using a laser to obliterate things in it’s path. You will always get some odors no matter what you do. I would say it’s normal, but you can mitigate it a bit by venting outside, adding an inline fan, not opening the machine for a few minutes (or more) after the cut finishes, etc. I don’t have the compact filter, but I do have a air scrubber. I don’t think I’ve ever went into coughing fits, but it can definitely stink for a while. I just let the scrubber run until I no longer get a strong odor before I turn it off.

Make sure your connections to the compact filter are seated well. And check your filters. They don’t last long at all depending on what you are cutting.

EDIT: Didn’t see you were cutting draftboard mostly. As Jules and Geek said… Clogs filters FAST. Definitely vent that outside if possible.

Also, some people are just more sensitive to those things that others. It could be you fall into that category as well.

Draftboard will clog that filter in a matter of days. Sounds like it may have already happened. Do you have any way to vent outside?

Do NOT cut Draftboard with the Compact Filter.

Draftboard throws a lot of sticky particles that will clog the pores in the filter and face-load it, ruining it. (And sending smoke into the room through the cracks around the lid.)

You will probably need a replacement filter cartridge. Don’t try to run the machine without a good filter or venting outside.

Oh man! I def didn’t know that. So try venting outside until a new filter comes?

Oh yes…if you have the option to do that, it’s a much less irritating alternative. You don’t want to breathe that smoke, or your family, so good call on getting it out of the way.

Personally, I’d save the filter for when you just can’t vent outside for some reason, like if you’re taking your GF to a show or something.

I think it would be tough to share a living space with any laser cutter. Even with perfect ventilation, over time there’s a lot of residual stink built up on the machine. Mine is in my basement workshop, and I keep a big air cleaner running 24/7.

Because I’m paranoid about particulates, I also have an indoor air quality monitor nearby so I can be aware if there’s a ventilation issue or something to cause concern.

Looking I do not see a CFM number, only a square foot area rating. The Glowforge produces smoke and fumes at 200 CFM so any exhaust assist needs to be at least near that. Vivosun makes one that is 190 CFM and only $35 and is excellent for giving what is in the Glowforge an extra shove outside.

Usually, in most grocery stores, there are “cut to size” filters of open foam that block airflow very little but provide a place for the big and the sticky bits to catch before they reach your expensive HEPA filter, with the additional benefit that you can wash it in the sink with soap as it does get clogged.

I also use a Blu-Dri filter as a room filter mostly but could connect it directly if I lose the ability to run it out the window. Meanwhile, it even eats cooking odors in the house much less Laser stink. It is a low white sound but less than a cutting Glowforge

Will you share your air quality monitor link. I’m beginning to get a bit paranoid with two little ones at home. Especially since I have been feeling respiratory distress.

I didn’t see it mentioned when I scanned other responses, but have you checked the exhaust fan??? If you’re getting dust/smells that are that strong, you may also have a clogged exhaust fan (back left of the GF) and even the duct–like dryer vent & lint build up, be sure to clean out to avoid build up and potential failure of the exhaust fan. As noted already, draft board is nasty. Can you switch to MDF? It’s much cleaner!!

But also make sure the Air Intake on the right side of the machine is not blocked–do not stack anything too close to the right side, and check to see if a piece of paper got sucked up against & stuck on the air intake holes on the underside.

Thanks so much for the response! I heard MDF has harmful chemicals emitted as well? I’ve had my glowforge for about two weeks and haven’t used it all that often!

You could cut Hickory and enjoy the stink? But Maple, Walnut, Cherry, and Baltic Birch would be easiest on nose and filter.

There are some laser-safe MDF (safe for the unit and our lungs), and I got some 3mm stock from Wooditis on Etsy.com, and love it!

Thank you for the response! As I said, I am SO new at the laser and had bought some baltic birch 1/4 and tried some settings I found on here…It sort of looked like it was actually burning a bit so that is why I purchased proof grade materials!

So good to know! I was actually searching and found their shop a while ago! I don’t really know much about settings–did you just trial and error or did you use a setting provided from proofgrade materials?

I usually start with as similar PG material/thickness to any new non PG I want to work with, and then adjusted to suit–in this case, I think I picked med maply ply, and once I got what I liked, “save as” with the settings I liked as “3mm MDF” so I can just select that from the list any time I use it.

There was a really good thread out there about test grids–a very systematic approach. But I just kind of wing it… Before GF added the “save as” feature, had lots of notes on paper, or on test samples.

Looking I do not see a CFM number, only a square foot area rating. The Glowforge produces smoke and fumes at 200 CFM so any exhaust assist needs to be at least near that.

The Austin Air I linked to is not an exhaust assist, it is a room air cleaner.

It is a Foobot, but it looks like they’ve stopped selling them. There are lots of similar devices on the market at a variety of price points. They try to market based on all kinds of sensors, but the important reading is PM2.5, which is particles small enough to get deep into your lungs. I do also have this IQAir unit in the bedroom because I’m also interested in carbon dioxide measurements. Off-topic here a bit, but a lot of studies lately are starting to show that even a reasonably small a buildup of CO2 can impair cognitive ability, so I wanted to see how bad it gets overnight in a closed room with two people breathing. The answer is pretty bad: spikes to 1000+ ppm. 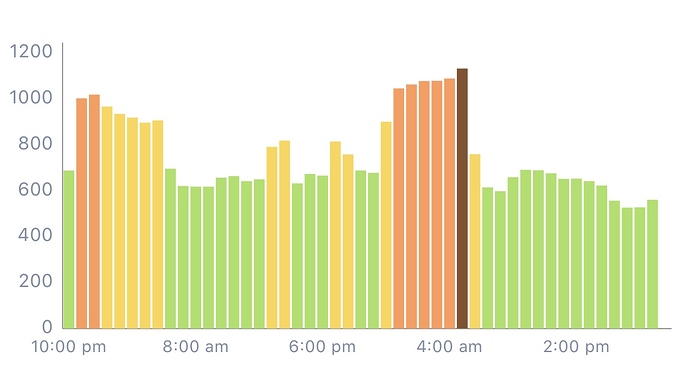 Finally an excuse for why I’m so stupid!

even a reasonably small a buildup of CO2 can impair cognitive ability,

That would explain soooo much.