Funny Thing Happened on the Way to the Forum

The Glowforge fairy left a deposit on my doorstep yesterday.

It’s a Pre-Release, so I have to give it back one day…but by all that is holy…they might have to physically remove me to get to it. (As in pry me off…crying. Or at least kicking up a hell of a fuss.)

I’m probably supposed to be all cool and adult about this…definitely not my style.

Those of you still hanging around waiting for this thing…

I actually had to wait until late last night until someone (who shall remain nameless) came home to help me to lift the the machine out of the box, so I just spent the day stroking it, talking to it and introducing myself.

It really is a gorgeous machine!

And it’s heavy. You need two people to get it out of the box.

Once I started setting it up it didn’t take long - maybe 20 minutes, and sorry for not timing it, I was taking pictures as I went so i could put it all back together again later.

The connection was smooth. (You are going to need to connect the machine using a device that is connected on your WiFi.)

By then it was late, and hubs wanted to sleep and not listen to a machine running, so I decided to wait until morning to run the first print. (I ought to get a medal for that…after waiting all day…Grrrrrr!)

I wanted to carefully follow the instructions in the manual (which is extremely good so far…it is still under development, but I was really impressed with it)…for two reasons.

One, I am a complete laser neophyte and had no idea what to expect…I figured if I could do it by following their step-by-step guide, anyone could. And two, I was trying to catch anything that didn’t work.

So the first thing I made was their Founder’s Ruler. You might not think that is terribly exciting, but I sure did! The engraving on it is clear, crisp, there is absolutely no edge bleed around the letters and numbers like there was in some of the show prints that we saw…it looked perfect. And the measurement on the ruler was completely accurate, I pulled out the calipers to measure it. Exactly six inches. So accuracy gets a big thumbs up!

The next thing they tell you to do is draw something on a sheet of paper for scanning and using as an engraving on a little plaque. Definitely not my strong suit, and I spent longer on the drawing than the machine did printing it. I also made the mistake of leaving way too much black area in the drawing - it took too long to engrave and lost all of the stroke mark detail…rookie mistake.

Anyway, the ruler and the little plaque thing are shown below. The GF software smoothed out my terrible drawing somewhat, making it look better than the original. We also have the option of darkening the render, or lightening it by using the CTRL key and the keyboard arrows, and I had to do that because my drawing was picking up a reflection from all that black ink. 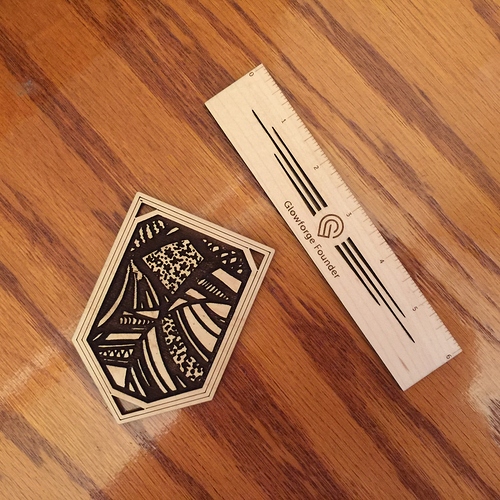 Third thing we have to do is use something we designed, so I’ll bet you’ll never guess which one I picked.

(And I gave the original a few curls…just because.) 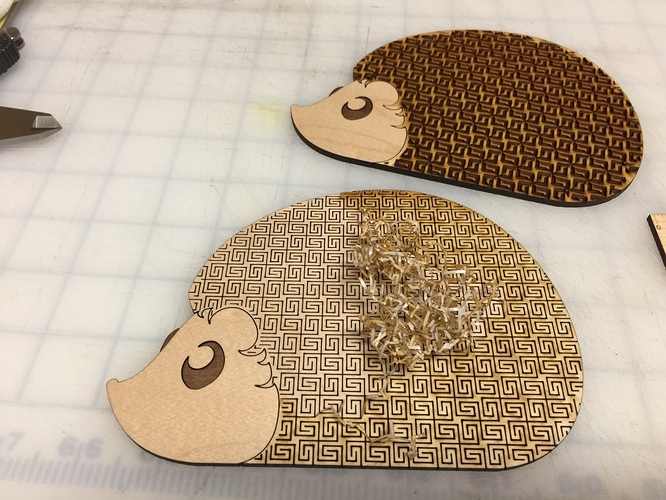 I’m posting the masking removal photo, so you will know there are some downsides to these things. (Peeling the tape off of something like this is a looooong process, and the easiest way to do it is to use a fingernail or a dental pick if you have one.)

One thing that I discovered during the printing of the hedgies, is that if you select Score for your vector lines, the engraving happens just like the cuts - the laser follows the path from top to bottom and side to side. It’s a quick process.

But if you select Engrave for a stroke line, the slower side-to-side engraving process takes place, and the program tries to fill in the width of your strokes, just like it does for a Fill. (top hedgie in the pic) So the top hedgie took 47 minutes to complete, and the bottom one took about 9 minutes. I like the effect on the top one better though, so it was a lucky accident. (Remember to take any bathroom breaks before you start a 47 minute print that you have to keep an eye on. Free tip of the day.)

Also did a small photo engrave, but it came out a bit too light - I need to adjust the settings and run it again before showing it. (That was just a quickie to see how it worked…it needs a deeper engrave to show up, and I need to learn what I’m doing.)

Soooooo… it took about a day to feel amazingly comfortable with this. For a complete beginner.

The machine delivers every bit of the excitement that Dan has been promising us from the beginning. Pat yourself on the back for sticking it out.

I’ll keep you updated with anything pertinent that I find as I go through and test this, and make mistakes, and learn…

I’ll try to keep up with the forum Highlights, but i’m also sending reports and feedback to Glowforge, so if I’m not engaging with ya, it ain’t that I don’t love ya no more!

And yes, still doing tutorials. Going to incorporate anything learned from this, either here on the forum or in an actual hints list if I can find anything that Glowforge hasn’t covered. (So far, how the machine acts for an Engrave versus a Score is the only thing I’ve noticed that isn’t covered in the manual. Which is pretty phenomenal.)

I have to go pass out now.

So excited for you! You definitely deserve it with how active and helpful you are in the forums. The projects you’ve done turned out amazing and I can’t wait to see what else you make.

Also, you seriously have the patience of a saint!

Congrats! Can’t wait to see what comes from your exploits!

Congratulations. Great pick for a Pre-release. Enjoy and keep us posted.

Also, you seriously have the patience of a saint!

Not really, I just fake it well…chuckle!

Can’t wait to see what comes from your exploits!

I’ve got some questions i need to ask…by gosh, i just saw your post pop up while I was typing this…

Congratulations! I knew you’d get one eventually!

Congratulations!!! You deserve this so much for all the work you do on the forum. Have fun!

Oh btw, when removing the masking an eraser works great unless there are tiny details that might break off, in which case masking tape works wonders (thanks for that one @dean).

Thanks guys! It’s just the teensiest bit terrifying right now…it will be a lot more fun after I relax a little bit more.

But the potential for this thing has my heart singing. It’s unbelieveable how precise it is!

Congrats on the pre-release! Those hedgehogs are ADORABLE!!! Really glad to see more another appearing and that it’s yet another positive experience.

I’ve used an awl for removing masking in the past. If you’re gentle and keep it as horizontal as you can, it works well to get under the masking within it marring the surface.

Wonderful! Good for you (you certainly deserve it!) and good for us too… it’s comforting to see more prerelease units heading out

I’ve used an awl for removing masking in the past. If you’re gentle and keep it as horizontal

And we have a winnah! I’ve got a thin Cricut spatula that is gliding right underneath the masking.

(It was too covered with tar/soot/whatever that stuff is, for the masking tape to work.)

Did you get a pkg of proofgrade along side (or did some come packed with?) Can’t wait to see what you come up with creating !!! Congrats again !!! (You may want to look into the Gorilla Tape to remove masking like that too - coupon it at Harbor Freight or Michaels)

Congratulations and enjoy the process

What exciting news! And you are a perfect choice to receive one, Jules. Looking forward to hearing everything.

Yay! So glad you got a pre-release. I hope you can let the tutorials take a back seat and you just enjoy the heck out of it. Laser till the cows come home.

Laser till the cows come home.

And then laser with the cows !!

Woooow! I knew you’d receive a PR soon, you really deserved it!

My sentiments exactly - much grabbier than anything else. Duct tape can work nearly as well.