Further discussion of images being resized

I don’t want to post in problems and support because it’s not a problem for me and does not need to be addressed by Glowforge. I was asked to create a new topic, rather than respond to the original post. This was in reference to something posted by @chris1

"In Affinity Designer, you have to click More and turn off “Set viewBox”. This was posted in the thread linked here and written in regard to images getting resized when exporting and loaded into the GFUI.

Exported images from illustrator get sized incorrectly Problems and Support

I’ve noticed that a lot of files that I’ve created with illustrator get sized incorrectly in the glowforge, leading to bad prints and thrown away materials. The latest example of this is below. In Illustrator, I have a box that is around 10" wide and 5" high. When I import the file into the glowforge, the dimensions are drastically different. [55 PM] I’ve put the image next to the proofgrade sticker for size. If we measure the vertical piece with only a few teeth, in Illustrator it’s 1.15x3.…

I’ve been following this thread, as I use AD. Tonight, I reset my export preferences and turned ‘set view box’ off. I’m venturing to guess that some other setting in conjunction with that one might be the cause of what happened next, but I would have no clue what it might be. I exported my SVG and opened it in the app. My images showed in the left hand column where you input the settings, but there were no images at all on the screen / bed area. I even did a select all and there was nothing there. Also, on the dashboard/home area it did not show any thumbnail image of that file. I went back into AD and rechecked the ‘set view box’, exported again and all was well. I’m going to stick with what’s working, but this dichotomy of instruction is puzzling to me.

Does it work if you put your design on a 20x12" artboard?

@palmercr probably has it right (as is often the case). You may be able to see what you’ve got if you zoom below 100% (to 67%) and look around outside of the bed area. Otherwise, 20"x12" artboard will allow you to actually place objects specifically where you want them on the bed.

Turns out I basically just repeated wrong information that has been corrected before, but it’s hard to find stuff in Discourse as we know.

I did a bunch of tests to make sure I’m seeing what I’m seeing, and then did some web searching to confirm: Affinity Designer always exports SVG in px, regardless of the units selected in document setup. It chooses those pixel values based on the DPI setting, which explains the confusion around “why is DPI relevant to a vector file”. So 1 inch at 300 DPI will come out as 300px, at at 72 DPI will come out as 72px. This is useless of course, since there’s no way for the GFUI to know the DPI you exported at in order to convert pixels back to real sizes. There’s presumably some magic DPI value that will happen to work today, but I determined experimentally it’s not 72 or 96, and then I was so grossed out by the whole idea of doing this that I stopped.

The good news, however, is that it seems like they acknowledged this as a bug and it’s supposed to be fixed in the next release: https://forum.affinity.serif.com/index.php?/topic/34980-fixed-affinity-designer-svg-doesnt-maintain-scale-when-opened/&do=findComment&comment=240242

I didn’t try 12x20 because I don’t believe that is a fix: it will just be mapped to some arbitrary pixel values based on the DPI. Unless GFUI recognizes the aspect ratio and magically scales everything up, which… I just don’t want to think about that kind of voodoo.

Oh, P. S. Using an artboard in AD behaves very differently than Illustrator. It actually exports that as a clipPath which gets applied to all the containing elements. Besides the fact that GFUI doesn’t support clip paths and will throw up a warning, this just ain’t right and I would suggest not enabling artboards in AD if you’re designing for CNC.

Yes…I do that 100% of the time…that’s why I said I was having zero problems with this issue. I was just curious about what other people who use AD had to say about optimum settings and puzzled by the instructions to change the “view box” setting, as it caused trouble that I wasn’t having in the first place.

There were no objects to place! That was the problem and that’s why changing that setting messed things up and I changed everything back to the way I had it to begin with. I think it was Lucille Ball who said “Don’t ‘mess’(not the real word) with success”.

That’s good to know. All I know is that when I offered my redone ‘turkey’ SVG to everyone, you had said that it didn’t come through with any real sizes, so I’ve been trying to figure out my settings so I wouldn’t have that problem in the future. Turns out it’s not really my fault! So, thank you for the new information.

Yep, there’s really nothing you can do to ensure the files are usable straight out of Affinity Designer. Opening it up in a text editor and correcting the width and height is probably the shortest path until they fix it.

I think what @Tom_A was alluding to is that sometimes they do actually load, but they’re way, way, way off the screen. So it looks like there’s nothing there, but if you zoom out until the Earth is the size of a grain of sand, you may be able to find your objects hanging out around the Kuiper Belt.

way off the screen

Yeah…I’ve had that happen to me before, so now I’m ready to go searching for them when it does. That wasn’t the case this time. Or at least it didn’t appear to be the case.

If you want to upload an example SVG where this happens, one of us can load it and take a look at the file (both in the UI and the source code).

Appreciate your offer, but no need. I just changed my settings back to where they were before. I was only testing to see what would happen if I did as @chris1 had suggested. In this case, change was not good…but all is well again. That will teach me to test stuff, eh? Haha!

I have the same problem - I export my Affinity Designer file as an SVG - then it prints too large on the wood - starting to be miffed about how much wood I’m wasting. Will start doing tests on cardboard I guess.

Looking for any help- to have the image go from the exported AD to a correct size on the Glowforge. Images in AD can be exported as export,web, print, flatten. Does that have a factor?

For AD files it has to do with how you set up the size of the worksheet and how you save the SVG file. You can read about it in this tutorial:

If you set up your art board to always be 12" x 20" when you begin a ‘new’ project, you should have much better luck. Also, make yourself a Glowforge preset. These are the settings I use every single time and unless I make other mistakes, such as too large of a file size, they always work for me. 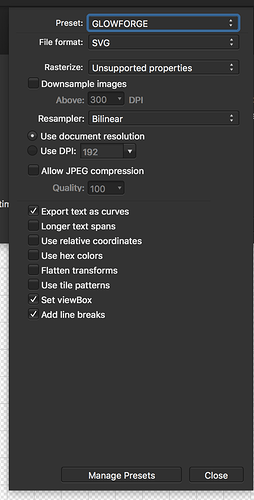 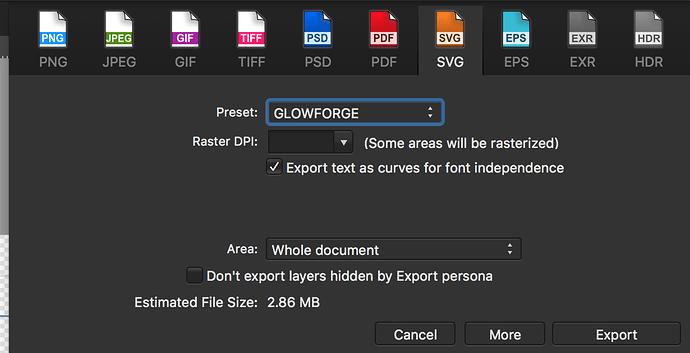 OK, so further upthread there’s a place where chris1 discusses NOT using artboards in AD because AD exports the artboard as a clip path… is that ‘not relevant’ or ‘not correct’ to the sizing issues for SVG out of Affinity Designer?

Also does anyone know if the fix that AD said was ready to be distributed in October has been distributed, via updates? (I didn’t see specific version numbers discussed on the AD forums.)

NOT using artboards in AD

My terminology may have not really been correct on this. I don’t think it’s actually considered an ‘artboard’ when I begin a new project. When I choose ‘new’…I’m just using a preset 12" x 20" workspace.

Seems I recently installed an update to AD, but for the life of me I can’t remember what was involved.
updates?