My wife’s cousin’s getting married on Sunday. So we made gifts for the happy couple. They’re both into all things geeky, but most of all Harry Potter and Game Of Thrones. So…

My very first box! (Not just on a laser, but ever.) 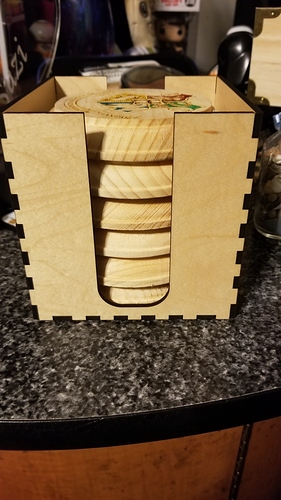 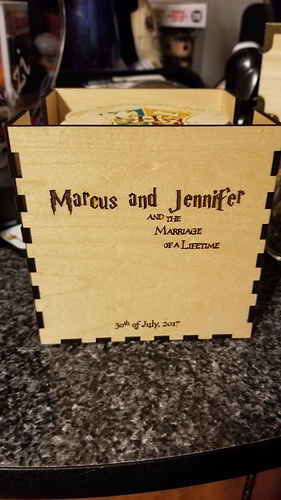 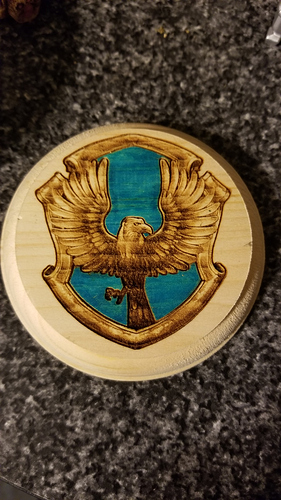 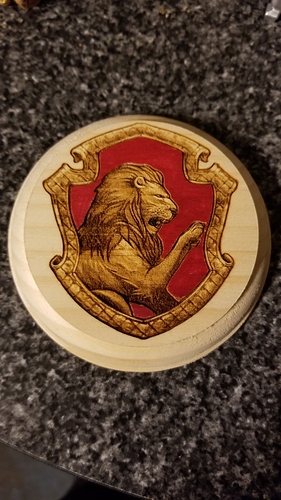 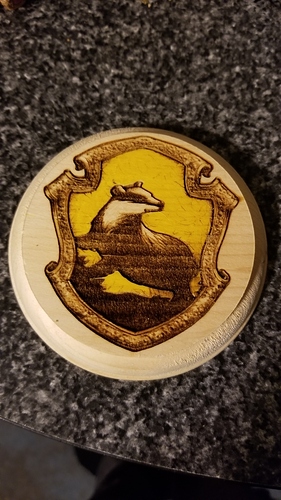 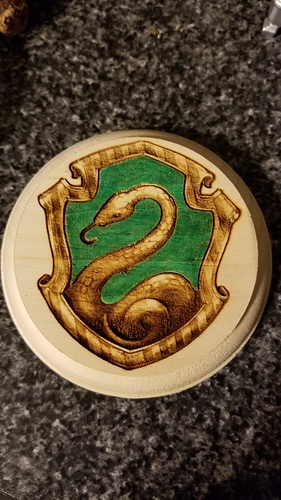 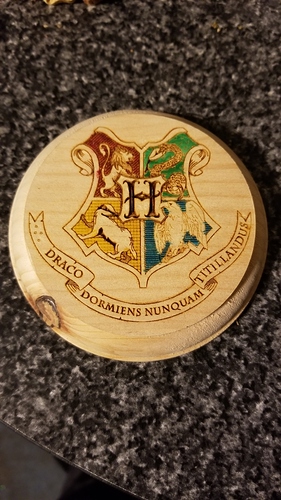 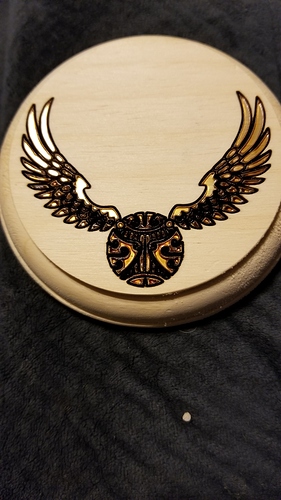 20170725_224357.jpg750×1333 309 KB
All of those photos were taken pre-polyurethane. They all shined up pretty nicely. Didn’t have time to take new photos. Last night was applying the cork to the bottoms. The box was sized-to-fit. The coasters sit ever-so-nicely in their caddy.

And, finally, a little GoT action… 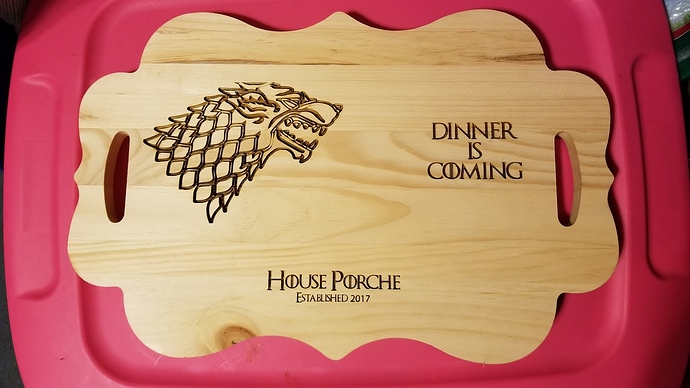 People are gonna fight over the snitch…lol.
Those are all super awesome!! And great job on the box too! Did you cut the blanks? I like the design shape of the cutting board.

That all looks amazing.

How did you do the background colors (red, yellow, blue, green) on the house crests? Hand paint post engraving? Or is that some sort of infill?

Those are all super awesome!!

That all looks amazing.

Thanks so much! It was a surprising amount of work to manipulate the images to a point that made them suitable for the engrave I wanted. The Hogwarts one took 2 hours because it was pre-colored and I knew I wanted to color it myself, so I had to go in and carefully remove the coloring from the background, while leaving the design in place, and then adjusting the remaining coloring for good contrast, etc. WORTH IT.

People are gonna fight over the snitch

Seriously. The funny part was, that was a last-minute selection. My wife said we have to make a set of 6 coasters. Not 4, not 5, not 8… 6. And I’m like… I can’t think of a 6th thing to use! Her original thought was Sorting Hat. But as I played with the image I quickly theorized that the sorting hat, engraved into wood, would look like poop emoji instead. So her 2nd idea was the glasses and lightning bolt symbols. I liked that idea, but thought it might be too sparse. Then I said “What about a Snitch?” She said “Sure.” And then I said “Hey! We can make the Golden Snitch… a Golden Snitch!” I’d never used the foil before, but figured it wasn’t a long engrave, so if it didn’t come out well, I’d just trash it and engrave without the foil. Well, it came out awesome.

Did you cut the blanks? I like the design shape of the cutting board.

The box was a modified box generated by http://www.makercase.com/. Modified in that I cut the slots in the sides and removed the cuts for a lid since it wouldn’t have one. The cutting board was, I think, a gift we never opened.

It had a cool gift-worthy shape to it, and a coloring that screamed “ENGRAVE ME!”

How did you do the background colors

Ha! I’m no artist. And I don’t have the brush skill required to paint those tiny images.
Taking a cue from @Jules and others… I used Sharpie! The Hogwarts coaster was a 1st draft. I was using fine-tip Sharpie and it bled a little if you look closely. So I got ultra-fine and redid it (but I didn’t take a new photo). As you can see, Sharpie does a pretty nice job of coloring wood. And after I polyurethaned them, it all really came together.

I was wondering where the sixth coaster was. See six in the box, but only 5 pictures. Guess that last one is the Hogwarts one you mentioned.

Sharpie is a great idea though. I’ll have to use it when the 'forge comes in. I wonder if there is a makerspace in/around Houston I could try this out on. I’m getting off topic.

Great job. Of course I love the foil, perfect for the snitch. They will love the gift.

Oops! Edited the OP and added it. Thanks!

They will love the gift.

Oh, man, I hope so! I tell ya… Personalized gifts are super-fun to give. They may be time-consuming, and they may even be more expensive, but to give something unique, or at least personal, to somebody is the best. My brother and I have joked (okay, half-joked) about instead of getting gifts, sending each other files for Christmas that he and his family can 3D print, and I and my family can laser cut.

I know a few people who are going to demand I make these.

Such a great gift! My husband is going to want that cutting board

This is fantastic! “Dinner is Coming”…hilarious! I really love the golden snitch one with the foil. Nice job all around!

What a lovely personal gift! They’re going to love those!

My first thought was that you made a box for the coasters you bought.
Second thought was, wonder where you got those awesome coasters?
Third… Oh my heavens.

Fabulous array of wonderful pieces. Extra nice that you personalized them for the people involved…that means so much more. Great job! And the foil is really neat…I’ll bet you’ll be trying more of that.

And the foil is really neat…I’ll bet you’ll be trying more of that.

I’m certain of it. So it’s something like $30/roll. I was about to add like every color to my cart. My wife was kind enough to stop me with “Why don’t we get one for now and see how it looks and if we like working with it. We can always order more.” When it finished engraving she said “That is one of the coolest things I’ve ever seen anybody make. I can’t believe we can just do that whenever we want.” So, yeah… we’ll be ordering more.

Totally. Blown. Away. They’re gonna be the envy of all their geek friends.

All of those pieces are incredible, but the laser foil really jumped out at me! Do you mind sharing a link for the foil? Asking for a friend.

link for the foil

Oh, sure! Johnson Plastics has it from their purchase of LaserBits (along with all the other great stuff from LaserBits).