So I’m making frames for a series of National Park prints. I posted about one a while back that I’ve finished and I’m on to the 4th one now (I still have to “finish” the other 2, but I’m waiting on custom cut glass that I still need to order).

One of them I’m trying to make is a geometric pattern that offers a 3D look around the frame. Here’s my test piece: 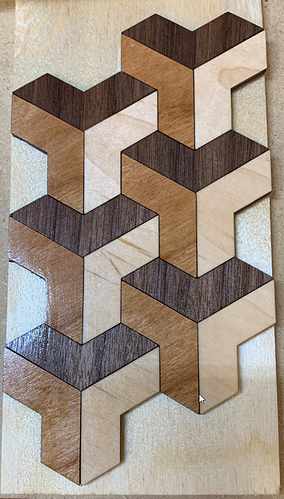 Looks great right? It’s exactly 3.5 inches across, pieces look great, they glue up well and the space between pieces actually adds to the look I want. I designed out the rest of the frame in CAD so I’d know what to cut the length for the backing and then how many pieces I’d need. 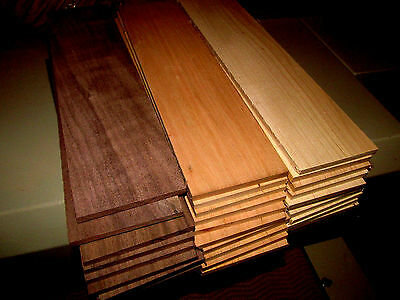 We deal mainly in oak, maple, cherry, walnut, sycamore, sassafras, hickory, and poplar. Excellent clean and clear thin Walnut, Cherry, and Maple for use in many woodworking projects. Sanded to thickness on the top and bottom surfaces.

Very excited, I started the cuts, doing 3 pieces at a time - I needed 4 pieces of each species to make all of my needed segments. As the wood cut, I noticed the weird cut pattern / order (I still need to get that nailed in AutoCAD I thought so it cuts more efficiently and from one end to another) and then I noticed that the wood was moving, even though I had it pegged down to the honeycomb. As it cut the longer edges, I could see parts moving / curling. Bah - I’m going to end up with some weird pieces that I’ll have to compare to others as I go, but they should be smaller / weird so I can tell and I’ll throw em, cut more as needed.

As I cut and collected the first round, I pulled out the scraps and set them aside. Once I had cut 2 rounds of 3 sheets each, I took the scraps upstairs to throw away. As I was walking up the stairs, I noticed that the scraps didn’t line up - meaning the edges that should have been exact because of the cut pattern, were off - they didn’t line up at all. Weird I thought and had a slight pang that something was amiss, but I figured perhaps I wasn’t comparing the same side of the cut (I was) or there were differences in the wood that would cause a shrinkage effect (THERE WAS SHRINKAGE! :D). It should have triggered me to stop cutting, measure, do a temp layout, etc. But I didn’t - forge ahead! (See what I did there?)

So I get all 360+ pieces needed cut, into separate bags and ready to go. Last night I cut 4 strips of baltic birch ply on the table saw, cut them to length, Kreig Pocket Hole screwed them together, and got the backing frame ready. Started the first row, did about 5 or so on the right edge and then started going left with the pattern.

It was OBVIOUS right from the start something was amiss. There were significant gaps in different areas, the pieces didn’t line up and as I started testing more and more out to the left, everything was out of alignment.

It was then that all of my tangential info came back to me and hit me like a bag of hammers. The wood was wet. The cut pattern didn’t account for ANY kerf. The wood bent as it cut and edges were 1/8 to 1/4 up in the air at some points when it cut. The pattern was off (verified later) and I had drawn / copied a CAD error around the cut file. It would have been ok for 1 side, but I had copied that shape around a CAD file for the whole layout. Problems compounded with problems.

I told my wife last night as we went to bed - I screwed up the geo frame. She asked what happened and when I told her, she said well you can always start over. Yep - that’s what I have to do but MAN I hate losing all of that work / effort.

So, now I’m starting over. Really all I need to do is cut another side of the backing, screw it in place and re-draw / cut all of the pieces. My test piece worked flawlessly because I drew the shape as a single piece and then copied it across the wood for cutting - wasting wood in the process, but giving me a flawless piece to work with. I selected proofgrade thick Walnut from the settings and it cut all 3 species perfectly. So that’s what I’ll have to do if I want perfect pieces to work with. And I do - one small kerf being off and it’ll throw the whole frame out of whack. Plus I have 2 pieces left of each so I can start while I’m waiting for the other pieces to show up.

I don’t really know why I’m posting this other than to vent and sum up my thoughts. It’ll be a cool frame once done, but for now, I’m starting over. I gave some small thought to figuring out kerf in my CAD file layout, but as long as the other way works and wastes a little wood, I’m fine with that. Besides I can get the grain in the direction I want it that way.

Thanks for reading / listening!

She asked what happened and when I told her, she said well you can always start over.

I thought women were supposed to be empathetic by nature.

I think there are many folks here who appreciate what you are going through. I look forward to seeing the successful execution of this project. Hindsight, sigh.

Yea, in the past I’d have either given up or tried to make it work, but I have a lot more patience these days…

We’re collectively encouraging you herewith. It will be great - fabulous when done, and you can chalk the error up to a learning experience.

(THERE WAS SHRINKAGE! :D)

The moisture content can make a huge difference in size. I was making round lamps and was calculating the diameter of the top and bottom rings, only to discover that as the wood dried it would be as much as a half-inch shorter in the time it took me to cut and finish the top and bottom leaving such a huge gap that I came up with the handle to fill in that gap. worse different woods do this differently.

Warping as it is heated is a different problem and trying to leave no space between the different parts will leave nothing to keep this from happening, not aligning may leave out huge amounts of waste, but I see two solutions, One is to leave an eighth-inch ish space between the parts, but a much trickier way to go is to break up the design in different colors so no two of the same color touch. That way the cuts will not be able to warp the wood at all as long as it was well pinned down until the last cut and then all the old cuts will have had time to cool off and settle down.

I had the same issue for a box lid I was making. I decided to put it on the back burner for a while but i did come up with a drawing that didn’t waste any wood. Caveat I have not run this yet, but I know that each piece is the same size and the pieces will not move because they aren’t fully released until the second color is cut. This is just an example of what I came up with and the size that I was working with. And all the grain moves diagonally into the center. BTW - the frames look spectacular! I love Escher and working with tessellations.

@mrinken: awwww, bummer. But I think it will look spectacular when finished, can’t wait to see!

@designvh619: very cool concept—I like the way you think!

That’s an incredibly similar pattern to what I used. It was optimized for a 3"x12" piece and perhaps I tried to sneak too many pieces in there. Never thought to use colors to define a cut pattern…

I haven’t run it yet, so I don’t know it will even make a difference to what you have already done. I will eventually get around to run it and then I will make adjustments to the file. I thought maybe it might help. Can’t to see the finished frames!!!

And NOT to start another kerf discussion, but last night I offset pieces at .004 and cut several both regular and offset to see how I could get as close to 1/2" for the original size as possible. I did pretty well - the ones listed below with a .004 offset were 1/256" of an inch smaller than 1/2" when cut, so I think I’m nearly there. I put a 1/16" gap between pieces and they all cut well. Interesting how the species of wood affected the kerf - I used a thick walnut plywood setting for all of these cuts (material is 1/8") and I think tonight I will do another test playing around with custom settings so I can really dial it in. I don’t know if you can tell from these pics, but the walnut kerf was thinner than the maple or cherry. Makes sense, it’s a harder wood and I’ll need to dial the cut down for maple and cherry. 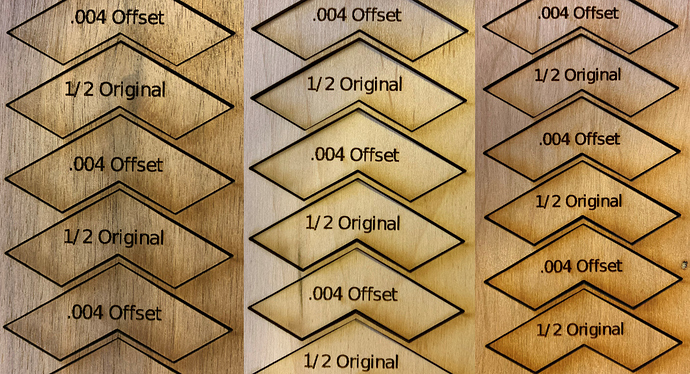 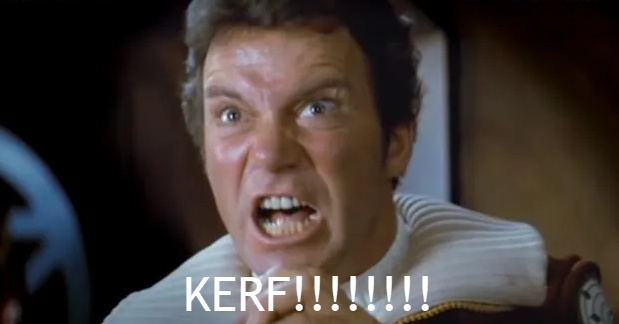 A mix of wood putty and metallic powders rubbed into the kerf lines could look like gold wire inlay when sanded smooth, Not a terrible look,

Very cool idea. I recut last night and this far it’s going together well. Small lines but like I wanted!

I’m glad it’s starting to shape up for you. Nice that you are staying on it, and working through! Kudos! Love the look!