Getting paid for designs

Hey y’all! I have had five designs published in the GlowForge catalog. My first designs were added in September. I know that they pay Net 30 but I have yet to see a penny and I know my designs are being downloaded. Is there any way to get a breakdown on which designs have been purchased?

Thanks!
Peachsalsa (designer name in catalog)

Your best bet would be to contact Glowforge personnel.

I know that they pay Net 30

What does this mean? And how do you know your designs are being downloaded? Unless some people have actually told you they’ve done it, there’s no way to even know that.

Also, only when someone prints a design do you get credit/paid…it’s not per download but per print.

When they send payment out, they do give you a breakdown of which designs have been printed the most, but they never give you a number.

Net 30 is they pay me this month for anything downloaded in October. And, I was told I was paid when the design is purchased/downloaded and then again per print. I know my designs have been purchased because I have had several people tell me they have.

Never heard that term ‘net 30’ used. That’s true though…we get paid near the end of the month for the previous months activity.

Not sure who told you that you get paid for purchases / downloads…but, that’s not accurate. You only get paid per print. Lots of people download tons of designs for free but then leave them on their dashboard and sometimes never end up actually making them.

I think @dklgood’s suggestion is good though…to contact support with these questions. Best of luck! 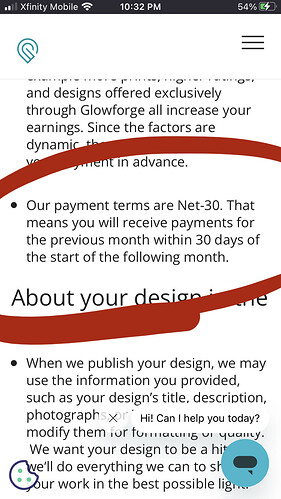 That is correct, but as stated above, and to the best of my knowledge, you get paid per-print, not per-download, if only a single print is purchased.

The details of how the payments are calculated have never been shared, it’s top secret I guess. lol I think that it’s possible that getting adding to the dashboard does factor in to the formula somewhere but I don’t know, that’s just my theory.

Did you set up your Stripe account and everything already? Have you checked there? Also, search your emails closely because sometimes I’ve had a hard time finding these emails for some strange reason.

September paid at the end of October, and October paid mid-November. I’m not saying that there wasn’t a mistake made somewhere, but I’d double check stripe first (and you might need to click on a drop down to choose Glowforge) and make sure there isn’t something going on there that prevented the payment from going to your bank acct. Then I’d reach out to support for help. I’m sure they will help you get it straightened out!