So I did my first full Inkscape creation, making a birthday gift for my Sister in-law and it engraved almost the whole image perfectly, the Glowforge at some point in the process added these lines, I’ve reviewed the saved image up close and can’t find any imperfections in the original image that would have caused this. Has anyone ever encountered this, and if so what should I do differently? I used Proofgrade Medium Basswood Plywood. File name is DisneyFireworks.image|375x500 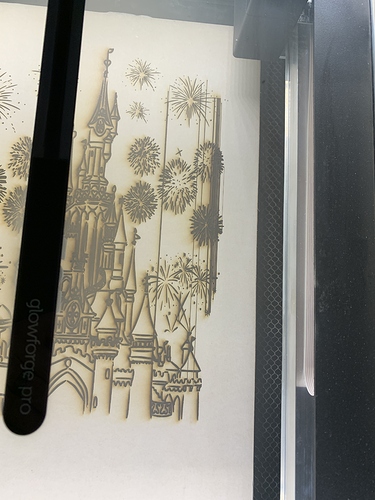 This usually means you have open paths. You can rasterize it to eliminate this issue if its only being engraved.

I thought that I had, when I completed the image in Inkscape, I took all of the peices 7 different items in total, that I imported into Inkscape (and trace bitmapped each one ) 3 total were bitmapped then duplicated, and reversed for opposite side of the engrave, cleaned them all up before duplication, and I used a combine command to make the entire image one file. I then saved as a PDF, set to Rasterize filter affects. It showed up on the GF app as an engrave without any of those lines showing, I did notice that at some point during the end of the engrave that my WiFi has gone offline. I guess maybe that could have caused it. Not really sure.

I used a combine command to make the entire image one file. I

It’s tricky. The open paths lurk around to bite you on occasions. I’ve had some that were very small specs left over from a trace and the don’t seem to appear until the job starts. I generally do a test run of everything at low resolution on cardboard or cardstock with light power to check for complications.

Also go through the file in outline mode to test. Also can see be clicking on each object and look at properties. There are some topics about hunting these down.

yea, but now I’m wishing I hadn’t used the one sheet of proofgrade plywood I had

Thanks for the answers @MechanicalGoose and @marmak3261, that’s right. I’m going to close this thread - if the problem reoccurs, go ahead and post a new topic. Thanks for letting us know about this!