I’m working on two projects, a wheel and a box.

The wheel was designed entirely in Illustrator. The critical bit is that the axle hole be 3mm (0.11811")

In both cases, the design is about 24% smaller than the designed size.

I’ve designed the wheel in both inches and mm and both are small.

Is there a way to guarantee that 3mm is 3mm?

When you are Saving As SVG, uncheck the responsive box. 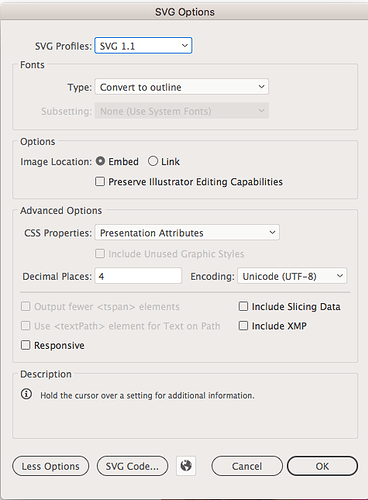 Here, just in case you missed it… 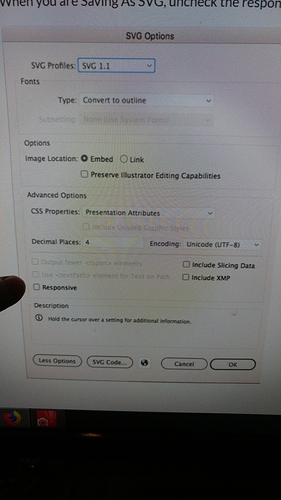 You’re such a hoot!

Ok, I literally LOL’d at that…

That was a disappointing shadow of a finger.

I’m going to steal your hand from one of your other pointy pictures and start including it in all of my screenshots. 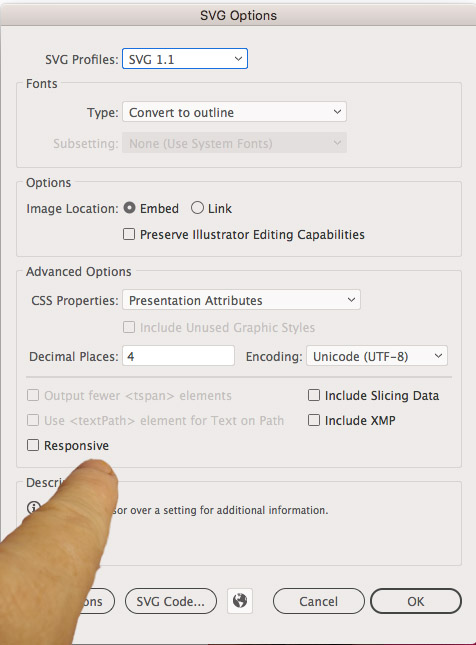 This pointy finger thing is just the funniest!

HAHAHAHAHAHA!
Oh JB, you don’t even know how funny this is. It took everything I had to resist taking another pic and editing my post becasue of that puny little finger LMAO. You must have read my mind. I’m so saving your pic. 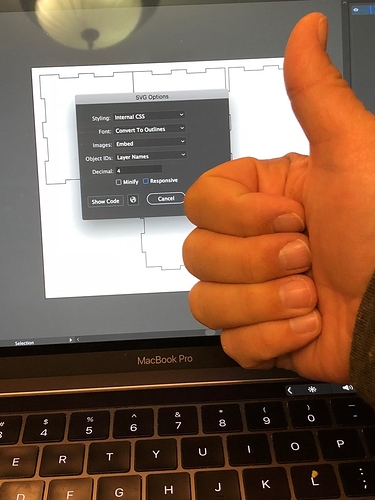 The screenshot was super helpful. I was doing FIVE things wrong:

I don’t know how many of those things mater and if I was being a scientist I would change one at a time but I’m going to take the Make Mine Match The Pretty Picture approach.

Now I just have to wait for it to get warm enough to cut. Thanks for the help all.

I’m going to steal your hand from one of your other pointy pictures and start including it in all of my screenshots.

And a new meme is born.

The screenshot was super helpful. I was doing FIVE things wrong:

It looks like you’re using the Export As function on the Mac. Keep in mind, Glowforge recommends the use of Save As; although, a few of us stick with Export. If you use the Export As function, these are the settings that I use; based on recommendations from @chris1. Any other settings may result in quirky behavior when importing files into the GFUI. 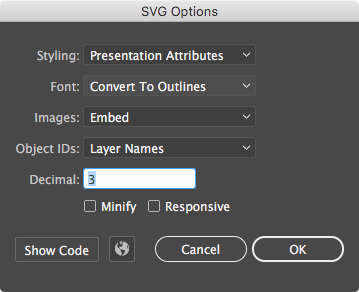 Edit: and of course, after I posted this, I see that you already noticed the Presentation Attributes settings.

It looks like you’re using the Export As function on the Mac. Keep in mind, Glowforge recommends the use of Save As; although, a few of us stick with Export.

I’ll second this - I had some issues with “Save As” and I find “Export As” much more consistent. In particular, Export saves out the dimensions while Save As doesn’t so the GFUI occasionally does odd things with sizing because it’s trying to guess. And Export strips out “hidden” things, which is useful for my designs because I make things with many hidden layers (for a given job) in my workflow - each job’s variations from a template are in their own layer, so I have files with 50 layers, only two of which are visible for a given export. Of course, GF recommends Save As, because that’s what they QA, so YMMV.

I’ve been using 4 digits, and turning on minify. One more digit of resolution is at worst a waste of a little disk space, and minify makes files smaller without changing the meaning, and that seems to work, too.

To be fair, there were also showstopper bugs in Export As not too long ago. Several forum members reported files that would crash the GFUI when exported but not when saved, and eventually we got a live sample that turned out to contain some geometry that was… all wrong. I feel like they’ve fixed the problems in newer versions because I’ve never personally had a problem exporting from Illustrator. But I can understand why the Glowforge lawyers would want to be careful not to recommend their customers inadvertently awaken an ancient darkness.

And the reasoning behind it all as explained by several knowledgeable persons here, is sometimes the settings push out the size via pixel count and the GFUI assumes and different PPI than the software outputs. Instant shrinkage…and no pool in sight!

If it’s any confort, these issues aren’t unique to SVG or GlowForge. In 3D printing, the standard format (STL) has sizes as numbers with no units, so on every file you need to figure out whether the units are supposed to be mm or inches or something else. And you need to figure out whether up is the Z axis or the Y axis. And, of course, different software has different defaults, so every time you open a file you’ve got potential to have problems with both scale and orientation, depending on how your software’s defaults and the authors’ software’s defaults match up.

At least we’re only dealing with things are all flat and aligned properly!

I’m glad you resolved it! I’m going to close this thread - if you have additional questions, go ahead and post a new topic. Thanks for letting us know about this!