hello I made a template in adobe illustrator, and I used dashes for leather stitching, when saved as group in svg then pdf since I assumed it would just take as if a picture through pdf and both just convert the dashes into a line… also it would help to know I’m new at all of this, I’ve used sketchup for designing furniture but thats about the limit of my knowledge on designing… thank you for any help

No problem…and you are correct. Illustrator does not treat a line that “looks” dashed as a single path dashed line. (That’s because it’s just an appearance of dashing, not actual dashes.)

The easiest way to deal with it in Illustrator is to create a dashed brush, which is very easy to do, and then just apply the brush to the path that you want to be dashed. We have a tutorial for it here:

Hey cats and kittens; Illustrator guy, here! I happened to catch this thread and, while I applaud Jkopel’s clever method of creating lines, I wanted to pop in and let you know you’re beating yourself up with extra work and to save you some time in the future. So here’s my handy dandy dashed line method, sure to make you hate making dashed lines a little less: Step One: Draw a dash! [image] Adorable, right? Step Two: Go to your brushes menu and select “New Brush…” then Pattern Brush [ima…

The line styles in Illustrator are not “real” (e.g. the path is still continuous, just the appearance is made to resemble dashes). Just like you can make the path out of leaves or whatever stamp along the path you want, but the path (the mathematical ephemeral path) is still the regular bezier curve underneath.

As an example below note I have applied the “road” appearance brush to the path, but the Glowforge only “sees” the bezier curve path (the blue line the red arrow is pointing to). This is also why setting line width doesn’t have any effect. If you want dashes, you can render the AI file out to a PNG file then you get the path as it appears (similar to what your laser printer does when you send the postscript path from AI, when the RIP changes it to a bitmap it does the same thing) 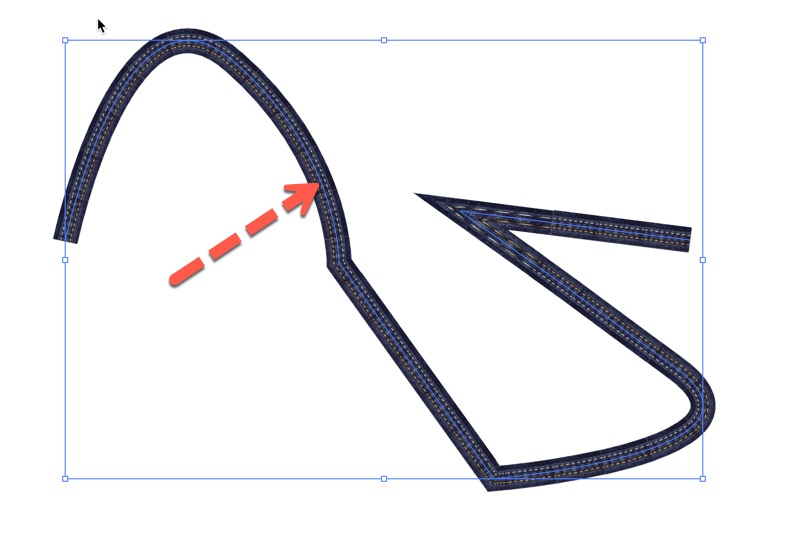 Or just do what @Jules says above, since doing what she says is always the right thing…

Snort! Okay, what have you been drinking?

Okay, what have you been drinking?

A crapton of coffee…

I trained at Bellevue in NYC, and when I started there we did have medicinal ethanol (i.e. very expensive FDA approved vodka) for treating alcohol withdrawal (an actually quite lethal problem) or ethylene glycol poisoning, but the challenge with IV ethanol is it is VERY hard to dose safely, and there are WAY safer medications now (although much more expensive than IV ethanol, which was about the same price as saline). My wife still uses IV ethanol for dogs with ethylene glycol poisoning (and particularly in a small dog the dosing is very complicated and it is easy to induce alcoholic ketoacidosis).

But personally it’s caffeine. As I tell my coworkers, if you see me walking around without coffee, call a code blue as I probably died…

Hey, have you ever tried matcha (crushed green tea)? I’ve gotten completely off coffee in favor of it…it gives you oodles of energy without making you jittery at all. (Awesome effect.)

Supposed to be full of antioxidants too.

without making you jittery at all

And the point of that is…?

And the point of that is…?

Glad you’re not a surgeon!

Glad you’re not a surgeon!