I got to spend a few hours downstairs in my craft lair today, yay! It’s kind of a pain for poor Hubs to get my post-surgical self and all the necessary equipment moved down and back up again, so it’s not an every day thing at this point. Also my stamina still sucks, so I don’t last long once I’m there, but I made a little progress on my current projects, so I’m much less grouchy than I was yesterday!

First up were collars for the kittens, engraved with their names and our phone number. I kinda jury-rigged them using some plastic snap buckles from old puppy collars my dog has outgrown, but since the kittens will probably grow out of them sometime in the next six hours or so, they’ll do for now. 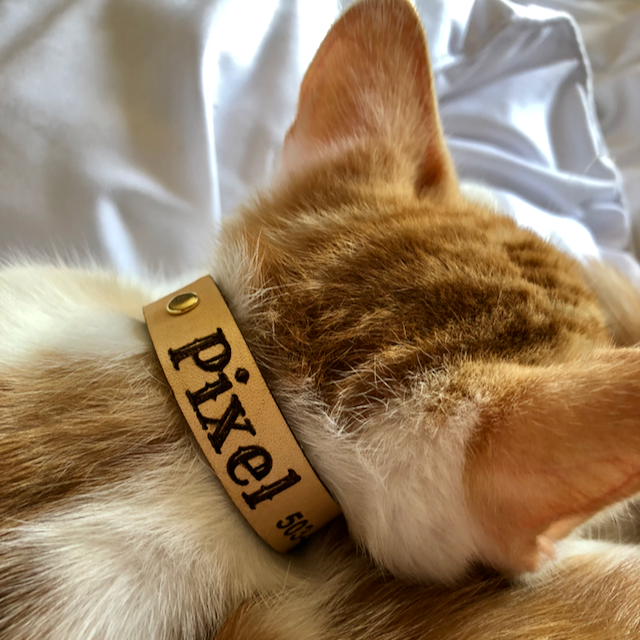 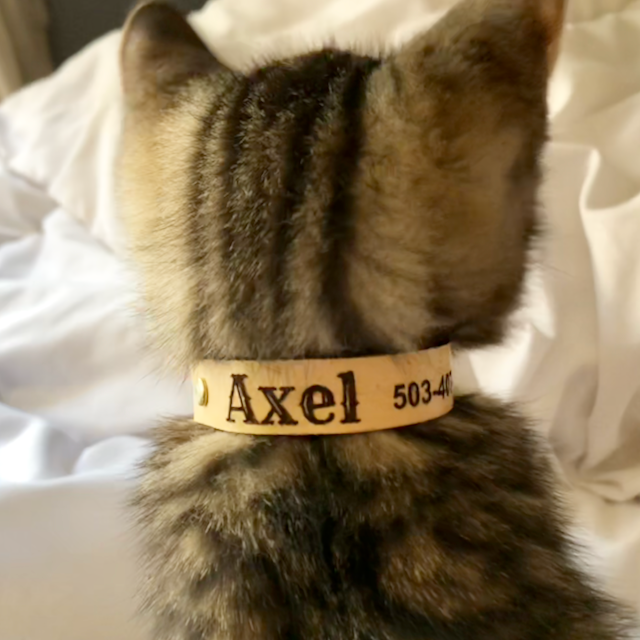 And I made some progress on the “Jack” tile-topped box I’m making for one of my employees who lost his dog last month. I screwed up the design for the bottom half (I’m blaming the pain meds!) so I have to redo that, but I finally got the top finished and assembled: 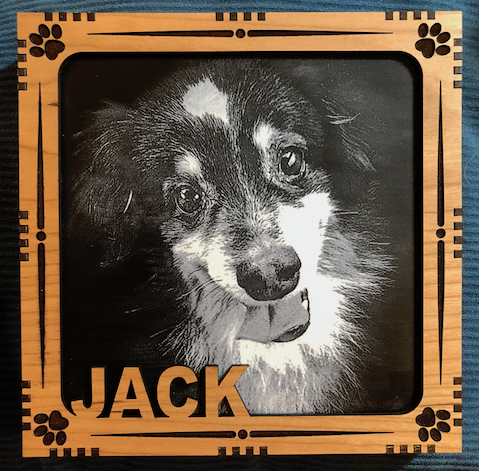 Despite my drugged state when I was designing it, I even managed to come up with a fun way to hide the finger joints for the wood inner lid that the tile sits on top of. I ran a little trail of paw prints around the sides, and hid a finger joint in the pad of each one. It actually worked even better than I thought it would – I had a hard time getting them to show up in the photo! 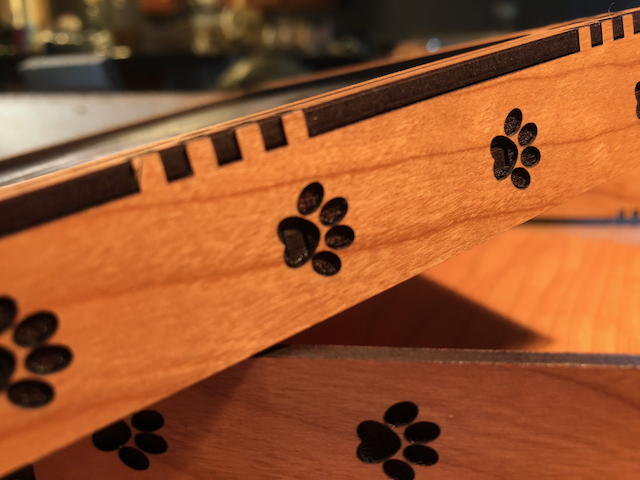 I also cut a new back for my “Gwendolyn” edgelit LED sign because I managed to chip the first one, but my energy petered out before I finished getting it completely replaced. Next time!

You are a good friend.

Love the paws on the frame.

i like your finger joints. those are creatively done as well. to thte point of looking more like a design element than the structural part.

That was actually a lucky effect I stumbled upon when I decided not to put them all the way across so I didn’t have to fiddle with trying to get them evenly distributed along the entire edge.

Your hidden finger joints are pure genius! We need more like this. As for the collars, I was so lost in admiration of the kitten necks, it took awhile to fully appreciate the collars. They look great!

I even remembered to measure the depth of the engrave and shorten the fingers by that much. Kind of amazing, in retrospect, given the meds I was taking at the time!

I love the idea of hiding the tabs in the paw engraves too!

Nice!
Seriously, only the loss of my arms (or pain) would keep me from dragging/slithering to where ever my glowforge was.

only the loss of my arms (or pain) would keep me from dragging/slithering to where ever my glowforge was.

My thought, exactly. Because that’s how it works on TV! You shoot Clint Eastwood in the shoulder and he slaps on a bandage and heads out after the bad guys, right? And it’s just my ankle. The rest of me should be fine. This wussy weak stuff is NOT what I signed up for, darnit!

I really like the clusters of tabs… Very nice work all around!

Also, my stamina still sucks, so I don’t last long once I’m there,

Can you get the medical insurance to rent you a powerchair with the ability to lower the back and raise the legs? I finally got the insurance to buy the batteries for a chair I already had, and hopefully, you will eventually not need it at all, but it could give you respite without having to go back upstairs

Amazing work! Each day your stamina will improve–I’ve had a few long surgeries, and went from feeling that walking thru the house was nearly impossible, then a block, then a mile, seemed every 7 days a switch was turned to change order of magnitude I could do!

Can only imagine if your GF projects increase in fabulousness by that much, youzza.

The frame for the tile is gorgeous–a very touching memorial, but I hope you make one for your two beasties, too–the collars are great, too & good to get them used to collars now, so you can keep making new ones as they grow! (most of my beasties hated collars, my current one is indoor & doesn’t need one, but I use a leather harness I made up fast to take her out now & then–works better than the one I bought & she got out of once…)

Can you get the medical insurance to rent you a powerchair

Nah, Tricare wouldn’t even pay for my scooter.

Or the orthotics I’ve always had to wear. Not that I’m complaining (much) – because they DID pay for the surgery!

I worked out a pretty good “flow” today that let me elevate my ankle most of the time, and conserve my energy enough that I was able to get more done than I expected before I pooped out. And I’m getting stronger all the time, so it won’t be much longer.

Your tile lid is amazing! Love the hidden finger joints … But it really is so beautifully embellished!

Nice that the kitties were given some attention also. Cute! Cute! Cute!

then a block, then a mile

That’s good to hear! I know, intellectually, that it will keep getting better, but sometimes in the moment it’s hard to live with feeling so weak!

good to get them used to collars now

Yeah, I had velcro ties on them until I could get collars, just to keep them used to the feel of something around their necks.

The kittens came just before surgery, and although I had managed to get all the other accoutrements, I didn’t have collars ready for them.

That’s really purty. Might make some for our cats. And I am totally stealing that hidden joint trick.

Nice work! Love the kitten collars and the kittens!!

I feel for you. I saw your other conversation about the surgery, but the replies were shut down. I had ankle surgery 3 years ago and it was a hard recovery. But I also react very badly to most pain meds and had severe vertigo for months. But as far as the ankle, sure you won’t feel 100% for a year, but you will be so happy to be back to 50+% in 6 months that it won’t matter much that it takes so long. Glad you have the glow forge for entertainment, even if it is slow going, I totally understand the reduced capacity to design. Glad you are doing it!!

Yeah, I didn’t do so well with the first med they gave me; that was NOT fun. Fortunately the second one was tolerable; it would be awful to have to choose between pain and something else equally as miserable. Ugh!

Definitely looking forward to pain-free walking / standing. It will be a whole new experience for me!