I’ve been using my “George Forgeman” for about a week now, and I’ve found that a huge portion of my time crafting is spent testing and retesting manual settings for non-

materials. Between that and GFUI shortcuts, things I’ve discovered in the manual, etc., I’d find it very useful to have a public wiki for storing and sorting the wide amount of useful info which can be found here and elsewhere on the web.
Being a gamer, I’m used to having a Wikia/ Gamepedia available for most games in addition to the official game manual and forums, and it seems like this community is active enough to maintain a similar knowledge base.

Is there an active wiki somewhere online I’ve missed? If not, is someone at Glowforge discouraging/ shutting down unofficial knowledge bases?
Or is it simply that no one has taken the time to throw one together?

Anyone who wants to set one up and maintain it can. It’s been easy enough to do a search in this category for the material and the word “settings” which we’ve been tagging the threads with.

(I keep my own personal spreadsheet.)

I think you just volunteered…

I have definitely thought about putting something together. It’s been kind of percolating at the back of my mind.

You would want to include not only the kind of material, but probably also where it came from (both geographically, and maybe even what store), because 1/8" oak plywood from one vendor is not necessarily at all the same as 1/8" oak plywood from another vendor, which makes this a little difficult (although it would probably give you a “starting point” even if your local Home Depot isn’t listed.)

The other idea I’ve been kind of toying with in the back of my head is making a Chrome plugin that would let you define your own materials in the GFUI, and maybe have a database of third party materials you could pull in off the Internet. It would not be terribly difficult to do; the GFUI is based on React and Redux, so you’d just need to send a few ADD_MATERIALS actions to the Redux store with the materials specs. The “hard” part would be coming up with a nice GUI for it.

There’s a lot of numbers that go into a full materials spec. It would be a fun little project, but I’ve been too busy making things with my GF.

Like everyone else, I keep my own notes on things I’ve tried. (I don’t bother recording settings for the proofgrade stuff, since the default settings have worked for me.) So far, I’ve only played with proofgrade and EVA foamboard (“fun foam”). I’m planning on playing with paper and cardboard later this week. (Using the GF is my reward to myself for finishing my day-job work.)

If you’re interested, my notes are at https://hackerfactor.com/glowforge.php (Let me know if you see anything wrong!) And if someone starts a wiki, I’m all for moving my notes into it.

Note about doing the wiki: Really requires an admin. An open/public wiki is likely to get spam and unvetted/bad entries from other people. (If it were easy, then it would be done by now.)

I’ve found it to be relatively difficult finding specific pieces of info searching these forums - there’s a lot of noise in the signal. I’d love some sort of repo of info that is more centralized, although that’s one for “the hopper”, I’m sure.

not having that hosted by the company that makes the product seems like a lost opportunity IMHO, but whatever, I’m happy to find the information wherever I can. preferably without trolling through lots of conversations to find it

I registered a domain (gfcommunity.info) a few weeks ago with the intention of offering to setup a wiki. If anyone is interested in helping manage it, I am happy to set up a basic site.

I was wondering the same thing last night. I was looking at using media wiki and creating material profiles. Except I never used media wiki before but it looks like the best choice to allow people to update.

I’d happily be a contributor, and would even be willing to contribute some time to organizing and cleaning up content. I actually suggested a wiki (as I am sure many others did), but I stopped short one I realized I’d have to find a way to fund the hosting.

there’s a lot of noise in the signal.

Yeah, many find it annoying, but generally, the direct responses occur within the first replies so you don’t have to dig too far.

I was looking at using media wiki

Media wiki is powerful, but is also very complex. In order to keep the administrator efforts down, and make it easy to backup, I started setting up Dokuwiki; which I have used in corporate Intranet environments before.

I stopped short one I realized I’d have to find a way to fund the hosting.

For the level of activity that I would expect to see right now, I am willing to host it with one of my existing accounts–until the GF team create an official wiki.

I’ve used MediaWiki before in a corporate context, and didn’t find it too difficult to work with.
As far as costs go, there’s wikia which is free (supported by ads)like this one I made to save the name

MediaWiki before in a corporate context, and didn’t find it too difficult to work with

It’s relatively easy to use, but requires a database, which I think adds too much opportunity for problems.

As far as costs go, there’s wikia which is free (supported by ads)

I don’t mind adds some places but in a wiki? No, just no.

I realize that eventually glowforge will provide away for us to save settings. But we will need to share and trade settings that are “beyond the manual”.

I see that MediaWiki has some setup to easily host it in MS Azure. I do get some free Azure hosting credits (I am employed by Microsoft), so that’s an option if we determine we’d rather go that route.

I do a lot of experiments so I setup a simple Google Form that lets me enter the basic settings and notes for each cut. This all saves through to a Google Docs spreadsheet so I can review my settings anytime. Quick and painless to enter and nothing will ever get lost or misplaced (post-it notes don’t really have that “never gonna lose this” ability) 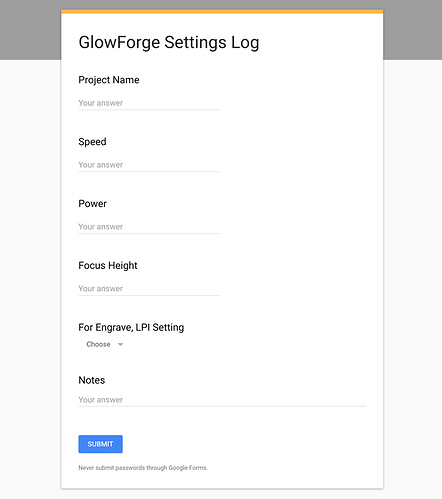 I do love a good Google Form – nice idea!

I’ll be doing Excel but thanks for reminding me of several columns that I’ll want.

I use an Excel spreadsheet. A single power/speed/lpi/passes setting isn’t enough. I made mine to cover a half-dozen operations so I can keep track of each of the colors & their respective settings I’ve set to distinguish operations in my project file.