One of the things that compelled me to get a glowforge during the kickstarter was a really neat and large cardboard globe. I saw it and I was all “I want that.”

It’s debatable that spending thousands of dollars on a tool just to cut cardboard was a rational decision, but I actually had lots of ideas of things to try so I got the forge and, somehow, never looked up the plans for that cardboard globe (partly because I was just busy doing other things).

I had always planned to make some cardboard models myself, and it started innocently enough with a little sci-fi rocketship.

Since I’ve always been fascinated by the huge airships of the early twentieth century a zeppelin seemed a good second choice of subject.

With some effort I soon had a diminutive little 16 inch model of the Graf Zeppelin. It was cute and all, but I felt some of the largest flying craft ever built sort of call for a model that gets at that size. So I hit the plus button on my plans and soon had a 32 inch model (posted elsewhere here).

I was happy for a few days, but for some reason I felt the need to challenge myself to build a model bigger than the forge itself. I wanted something visually arresting, something with…presence.

A bit more work and a few hours of assembly later produced what will surely be the final version of this design, a cardboard model of the Graf Zeppelin 48 inches in length, which works out to about 1:192 scale. 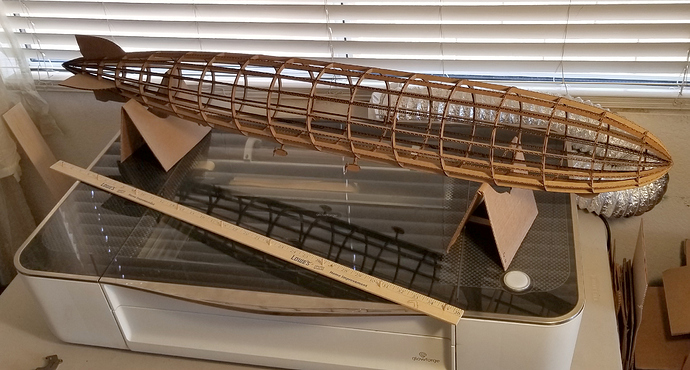 This one was large enough to warrant some engine pods and little cardboard props.

It was designed in Fusion360 with inkscape for the final layout. There are 16 rings and 16 ribs. The multi-piece ribs meet at differing rings around the model to hold it together (I still glued every joint for maximum durability). The parametric ability of Fusion was pretty much critical to making this design work.
Total time on the forge to cut the 102 pieces was a bit over 70 minutes. 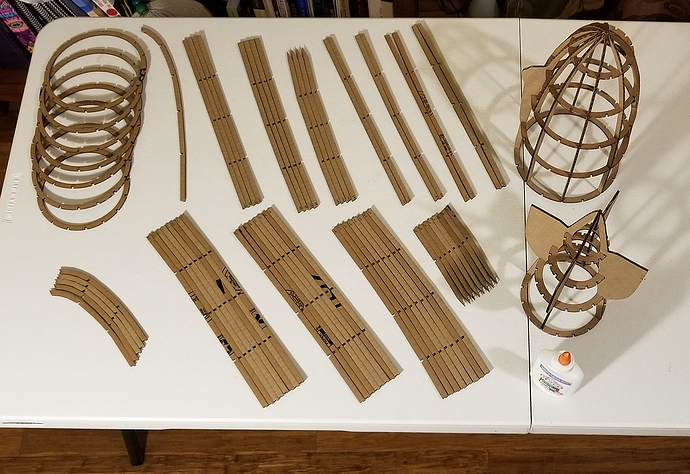 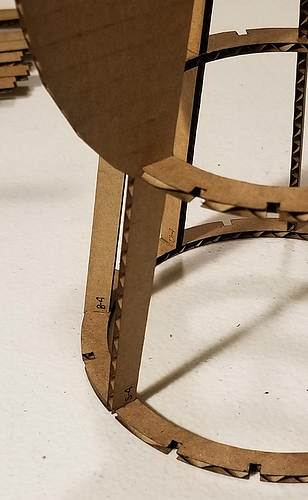 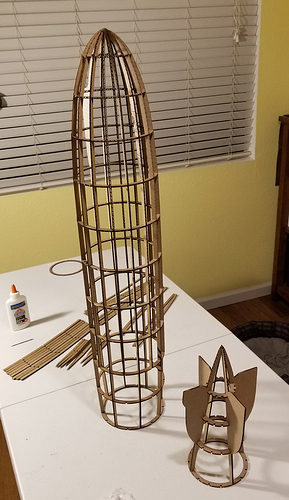 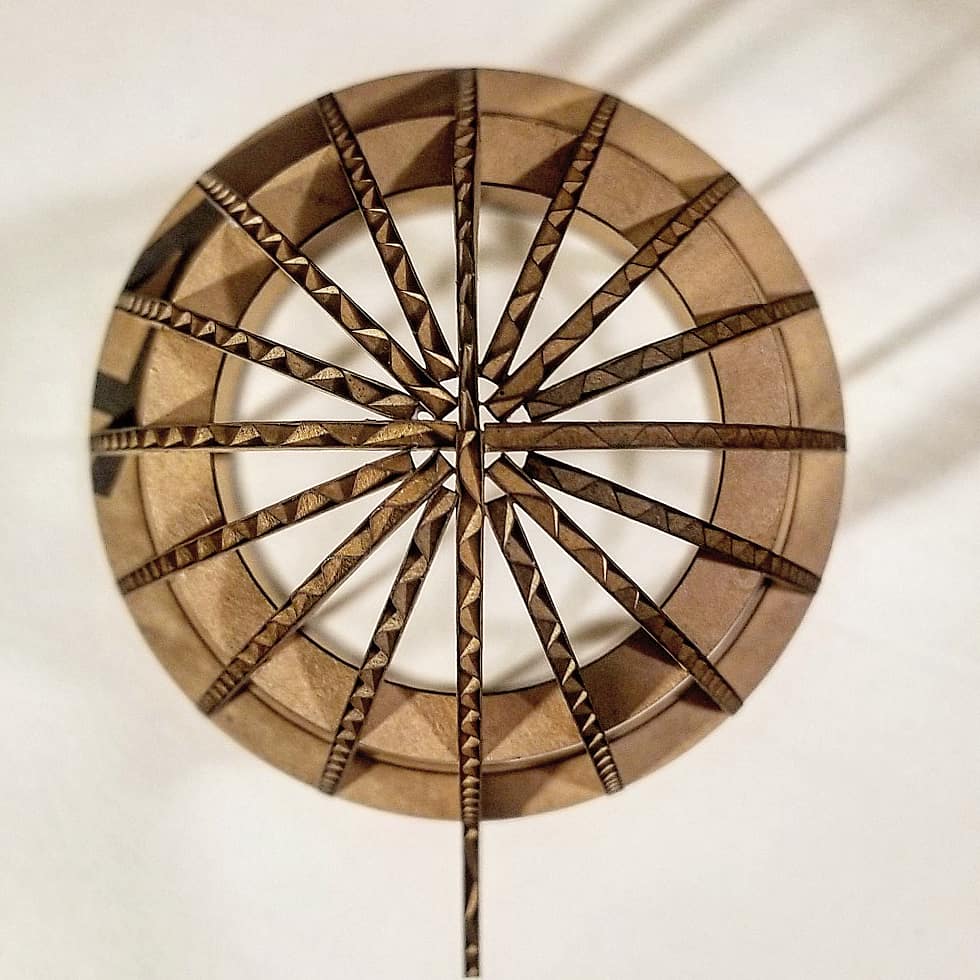 It’s large enough to be impossible to hold and photograph at the same time. 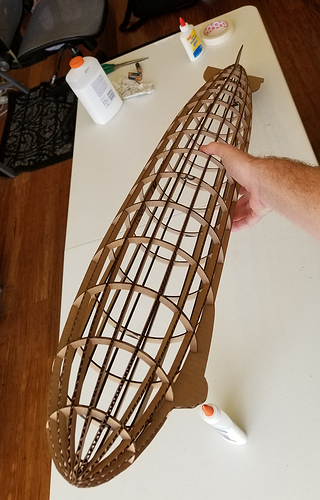 I think a greater challenge than designing or building it, however, will be figuring out where to display it.

EDIT:
By request, I put together some instructions and posted the files to thingiverse: 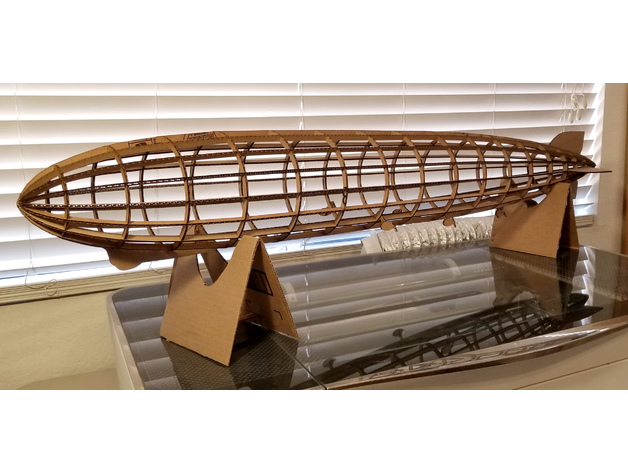 This is a cardboard model of the structure (approximate) of the LZ-127 Graf Zeppelin. This is a LARGE model, with over 100 pieces, that when completed is 48 inches long and six inches in diameter! Perfect for hanging from the ceiling, it will be an...

I didn’t document the build process very thoroughly, but I’ve tried to explain the process in the instructions well enough to recreate it. If anyone completes the model, I’d love to see your example.

Absolutely, positively, wonderful! Great job on that model! Have you ever been to the Zeppelin Museum in Freidrichschaffen, Germany? You would love it! Again, nice job!

Thanks. I’ve seen pictures from the museum, it looks like a fascinating place. I believe you can now get rides in a blimp over Lake Constantine(?), where many of Count Zeppelin’s early craft were built.

It really is a neat place and Freidrichschaffen is a cute little town, too. When we were there there was no sign of blimp rides, but it has been a few years so maybe now you can. It would be worth a trip for that. The old film footage they have is amazing and the history of how Freidrichschaffen was shaped by the zeppelin is all there. Neat stuff!

Great work, i can’t help but smile, when I think how big the “world globe” is going to be when you are done

Amazing job! What a cool display it will make.

This is an amazing piece, very good job.

Truly amazing! Especially that you designed it from scratch.

Hang it from the ceilling with fishing line in a place of honor. I love everything about this project - beautiful work!

So… you’re… not going to skin it, paint it with thermite, and fill it with hydrogen? Slacker.

Really cool! I wonder if you’re done, though… maybe a life-size model?

Absolutely brilliant - it is interesting how the scale / size of things has a point when it feels “right”. I really enjoyed your smaller models - but there is something about this size that actually feels like a “proper” size.

So, vaguely related anecdote, I flew on the last trip or the last passenger airship made in the UK. We knew they were closing down and had booked a flight on their last day of operations. Come the day, the wind was getting stiffer and stiffer and it was touch and go whether our flight would be allowed. It was just - but no more flights afterwards. This was from the same hangar used to build and store the famous R101 airship. This was the Skyship which closed down in 1990

Sorry, I stopped way short of that level of detail.

“Keep model away from open flame at all times.”

Don’t have quite that much cardboard. As a thought experiment, I think the limiting factor for a single-piece ring design on the forge would be ten inches in diameter, or an increase of 1.66 times of this design, which would make it 76 inches in length (if my math is right). But I think my wife has reached the limit of her tolerance for giant cardboard zeppelin models already.

That’s a neat experience of a historical moment, thanks for sharing. And thanks for the compliment.

I love this! Looks like it took a long time to plan! If you are looking for inspiration on how to hang/display it, I refer you to https://mymodernmet.com/studio-ghibli-castle-in-the-sky-installation/

Wow, that’s impressive. Miyazaki’s imagined flying machines have always had a distinct and fascinating character to them, but I’ve never seen his work in 3-d form. Very neat.