Continuing the overall concept of my Glowing Overwatch Sign and Butterly Wall Art, I created the following for my youngest son, who is absolutely obsessed with Cheetahs. 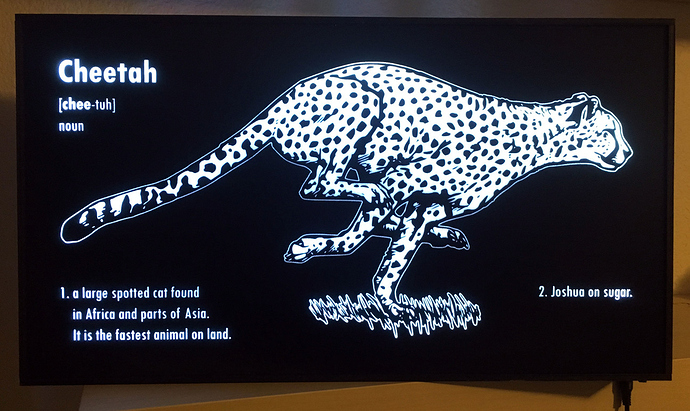 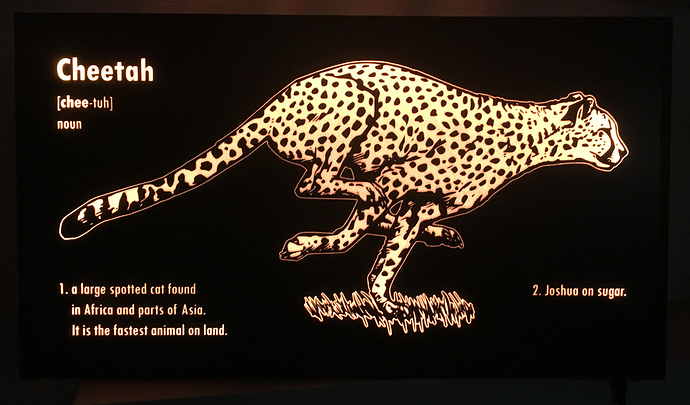 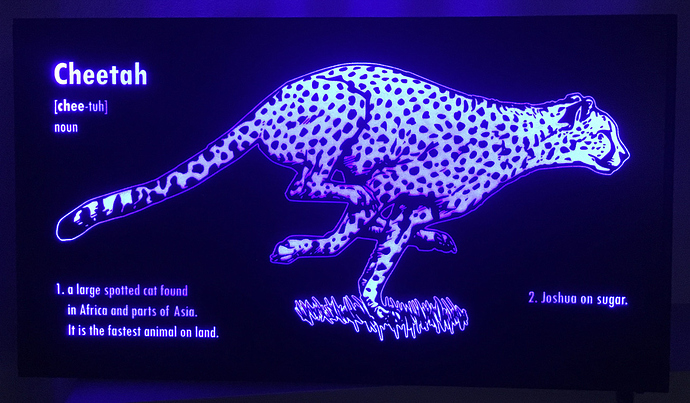 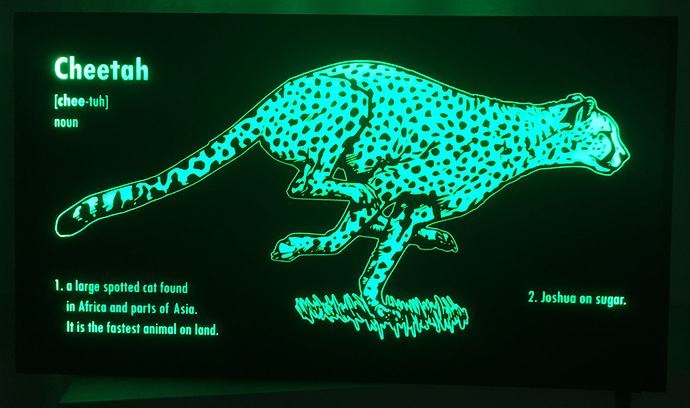 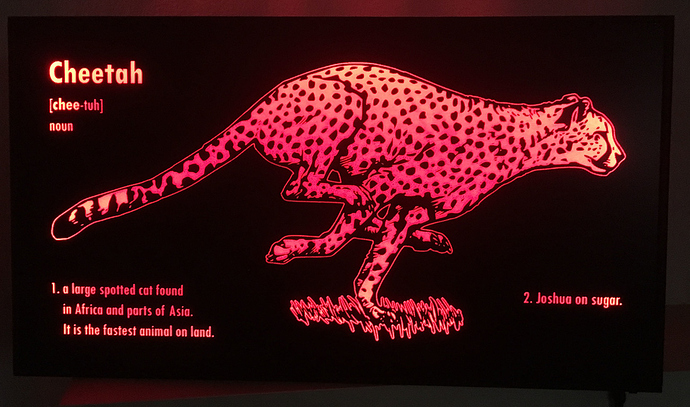 This was actually the simplest of the series in terms of construction, as the art consists of a single layer. Since I wanted to keep the disconnected spots of the cheetah black, I engraved the transparent elements onto a sheet of Black and Clear Reverse Laserable Acrylic.

One could also achieve a similar effect with normal clear acrylic, by engraving and painting the black portions before removing the mask. But using the 2-color acrylic seemed easier and more reliable, and I wanted to try it out.

Like the previous butterfly, this one also uses a $16 WiFi LED controller, so he can control the lighting via a smart phone app or Alexa/Echo, including the ability to flow or jump through various colors and pulse to music.

Very cool use of that material!

So many terrific projects from you, finely executed!

Thanks very much! I suspect things will slow down a bit after the holiday frenzy, but this has been a wonderful time to experiment and challenge my skills. I’m looking forward to seeing what happens at a slightly more relaxed pace.

what actual LED element do you have attached to the wifi thing, and how does the frame stand up (or is it hung / with a box?)

Will you just stop making things that are so cool?!

The lighting element is a 5050 RGB LED Strip Light. (Specifically I used this one, but only because it had the best price at the time.) The Butterfly used a similar 5050 LED strip from another vendor, and the Overwatch sign used a single-color 3528 LED strip light.

The strip lights are affixed around the perimeter of the frame, facing each other. (In other words, they do not face the front of the frame, but instead illuminate everything indirectly.) This approach allowed me to position the lights in a shallower (2" deep) frame without having visible “hot spots”, which occurred at this distance when the LED elements were directly visible.

The photos were taken with the frame just resting on a shelf (it’s thick enough to support itself), but it’s designed to be hung on the wall. In this particular case, the IR remote receiver is positioned at the bottom right corner of the frame, near the plug. It protrudes slightly, since the IR remote requires line-of-sight. (The remote is technically optional since the controller also supports WiFi, but it’s handy so I kept it in.)

For it to be shelf-friendly, I would also need to relocate the power plug to the side or rear.

The back panel has multiple long strips removed as ventilation slots, but I’m not sure how effective they will really be with it hung on the wall. If it turns out to be a problem, I might need to add a slight stand-off so that it doesn’t hang directly against the wall.

Hilarious! You’re on a roll with personalized gifts.

Thanks, Dan. I am truly amazed at the possibilities for creativity that you and your team have unleashed. I look forward to even more refinements as the software side continues to evolve.

This community is amazing as well; I have been inspired and have learned so much from everyone!

I’m learning to do wall art from you.

(Great job on the cheetah too!)

Joshua is going to love it!