My sister shared with me that my niece (who plays the video game Overwatch) had sent a tongue-in-cheek letter to Santa asking for “capable teammates.” My brother-in-law laughed and told her that she might as well be asking for a pony!

So… I quizzed my own kids to find out that her favorite character in the game is Mercy (a winged healer), then scrounged around for some public domain Mercy art. 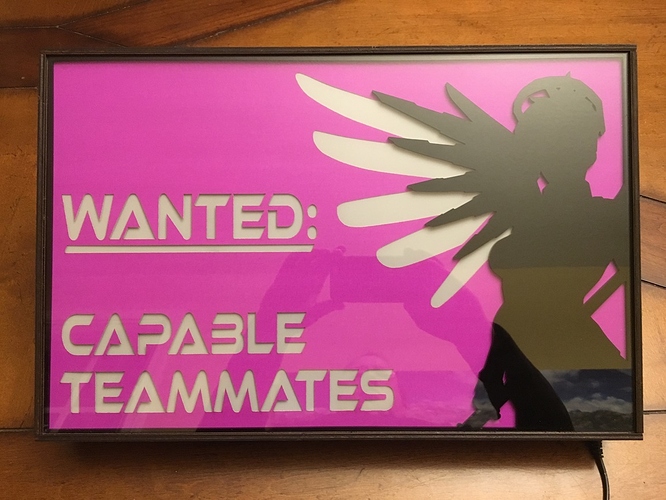 This was a fun project because I got to play withe some new-to-me materials like poster board, light-diffusing plastic, and Proofgrade acrylic.

I also wanted to use an existing 11x17 sheet of glass as the front pane, so I had to figure out how to make an 11x17 frame on a Glowforge with a maximum vertical cut area of just less than 11 inches. (I ended up engraving the channels for the glass, which allowed me to split the frame into four parts that could each be printed horizontally.)

Why did I need a custom frame? Because I needed room for the hidden LED lighting: 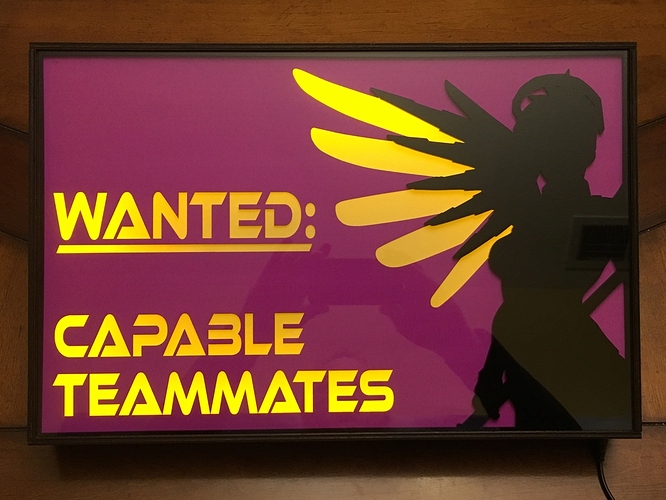 (Shhhh… don’t tell her; this will be a holiday surprise.)

what a great gift!

You are an outstanding uncle!!! This is an amazing project.

You either have some totally killer stuff in the works for your own kids, or you delight in making them jealous of their cousin.

Update – the follow-up projects for my own kids are now posted as well:

Butterfly Wall Art Made on a Glowforge

When I posted my Glowing Overwatch Sign (a gift for my niece), @mpipes commented that I had better have something in the works for my own kids. Challenge accepted.

(I really need to work on my photography skills, though…) [BF] The idea was based on a quote that my son had mentioned he liked. The frame was based on the one I used for the prior project, but this time the innards included multiple layers of acrylic (teal and black). For the innermost layer, I again used light-diffusin…

Glowing Cheetah Wall Art Made on a Glowforge

Continuing the overall concept of my Glowing Overwatch Sign and Butterly Wall Art, I created the following for my youngest son, who is absolutely obsessed with Cheetahs. [Cheetah white] [Cheetah orange] [Cheetah blue] [Cheetah green] [Cheetah red] This was actually the simplest of the series in terms of construction, as the art consists of a single layer. Since I wanted to keep the disconnected spots of the cheetah black, I engraved the transparent elements onto a sheet of Black and Clear…

Fantastic idea! (And it’s all been said…lucky kids!)

Link to the light-diffusing plastic?

Link to the light-diffusing plastic?

Wow! That is just beautiful!

If that doesn’t draw in some capable teammates, then I don’t know what will!