I want to engrave 4 dozen slate coasters for some friends. I bought some blanks from Michael’s - great price, but they vary at least 1/8" in thickness. I’d like to do several at once. Does anyone here have experience with height variations like this? Any idea how much it can vary before focus issues become evident? I plan to sort them as best I can, but would like to know how close they need to be to get an acceptable engrave. I realize “acceptable” is subjective - I guess I’m looking for “not obviously out of focus to the naked eye”.

Your best bet probably is to sort them, like you’re planning, and then take a median height and manually set your focus there.

With the way the system works, it would be best to either A. Make a jig, or B. Save a preset with the manual focus height and then use set focus to place the graphics on each piece.

A jig would be faster if doing lots of them.

With or without a jig, I’d say sort them into at least two sets, so the variance within a set is only 1/16. It’s a lot of work though. How detailed is the graphic you’re trying to engrave?

I agree, I think sorting them is the most reasonable way to go. If you wanted to get nuts you could try using a layer of sand or rice on a tray and nesting the slate to equal heights, but I don’t know if it’d be worth it.

Natural slate works fine but just in case you wanted a bit more contrast, a very light coat of mineral oil works well. You can read about it here.

Sealing slate Beyond the Manual

You do just a thin wipe before engraving. Just put a little bit on the rag, quick swipe and done. It just barely coats the top surface making it a little darker and giving more contrast when you engrave it. If you put it on afterwards it kind of defeats the purpose and would darken your engraving as well. **Edited to add-- It only takes a very small dab of oil. You don’t want to saturate the slate, just give a light coating. Rub it in well, then wipe off any excess. The tile should be darke…

I personally prefer a more natural look, but the shellac makes for even greater contrast.

That’s a cheesy slate project Made on a Glowforge

At the barn we have periodic parties, that are fairly fancy, so I figured a nice cheese plate would be nice for the next one. The same slate cheese boards from amazon as my prior project. Those are names of horses who live at the farm. As on the prior one, real shellac. Bella is our horse and Mozart is who I ride. [image] [image] Bella and Mozart

Shim them. Measure each one then put thin cardboard or similar underneath each one to bring them to within acceptable tolerances.

Also test focus height to determine what an acceptable tolerance is for your material. It’s not as critical as some think, but there are limits.

I have engraved dozens of that coaster(after coating with Shellac), and I’ve used the set focus tool for every one of them and they’ve turned out great(although, for whatever reason, my set focus is giving me a weird error these days).

While for presentation’s sake, having similar heights is likely good, the set focus has made it pretty easy. I will admit, I’ve also done them individually, mostly because it seemed easier. That being said, I guess it depends on your design. I’m going to do a few more in the next day or so, so I’ll likely be trying to re-figure it out in the next day or so. Perhaps I’ll try to do multiple to see.

Thanks for all the responses. I probably won’t get to play with this until the weekend, but I appreciate the help.

I have found that you get a much better contrast on Slate if you shoot it with clear acrylic spray paint (and let it dry) before engraving. It makes the Slate permanently darker like it’s wet, and where the laser hits it I think it tends to be “whiter” because of the acrylic. (I thought I had a picture of a recent print where I did this, but I couldn’t find it).

I did this one yesterday. Minwax oil-based poly. 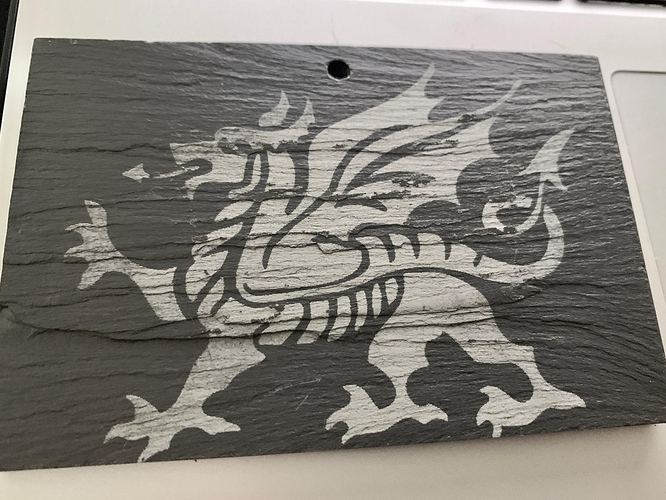 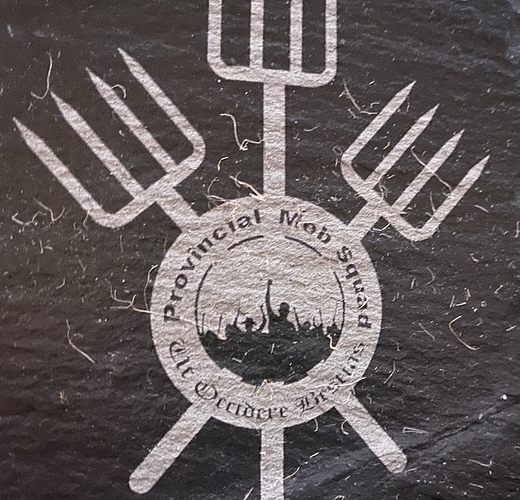 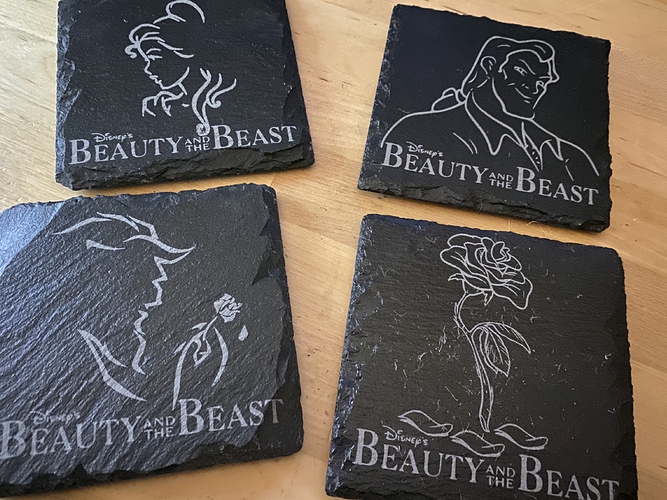 I did these yesterday with a shellac coating. These are those exact coasters. I did them one at a time, using the set focus. (don’t mind the fibers–they’re left over from the twine I was using to tie them together…).

I finally got these done a few weeks ago, and I found that the height variation was not that critical at all. I ran 4 at a time. The only real problem I had was that it was difficult to see the edges to ensure everything was aligned. I put a sheet of white paper under them and separated them by about 1/2" which worked most of the time, but because I was hurrying, I mistook the shadow for the edge on a couple, and ended up misaligned. If I was doing this for a business, I’d take the time to come up with a jig.