Help with a stamp

I’m feeling a little stupid this morning, and need a hand.

I’m trying to make a simple stamp out of acrylic to stamp onto leather. Simple circle, with letters inside. I think that I understand what needs to happen, but can’t figure out how to make it happen.
I’m using illustrator…
I have a circle, with the text inside. With the circle filled, the GFUI sees that as one operation, and will engrave it all, and not leave the text which is in another layer. How do I get it to see the text?

Change the color of the other item(s). The 'forge does everything by color and never by layer.
It’s the little things that get ya in the beginning, isn’t it?

Colors are your friend. Here’s a sample AI file optimised for the GF. Don’t forget to select
“save text as curves” when you save as SVG.

For more on ordering operations by using colors, this entire thread is priceless…

Continuing the discussion from Space Invaders or Mitral Valve Leaflets, you decide: I have always been curious about how the Glowforge defaults the order of operations. I have tested it in terms of position in the workspace and order of creation in the design. Nothings seemed to click right, but I had a sneaking suspicion that it was dermined by color. The Glowforge catalog designs always load in the same order, though you can drag and change them in the workspace, so I figured there must be so…

I changed the color of the text, but it sees the the engrave layer, and wants to engrave that whole layer, and not leave the text alone, even though it’s in a different color.

I think I found a way, though I’m not sure it’s the fastest/best.

Took the text, converted to outline, put it in the fill of the engrave, then excluded it from the fill.

I think I’m missing your point as to what’s happening. But maybe this will help… Fills will always engrave. Strokes can be set to cut/score. Of course, if you have some crazy 1" stroke or something, only the stroke path itself will actually cut/score.

Maybe if you post a pic of what’s happening and what you expect. Or feel free to UL your file and we can take a look at it.

So the pink fill layer will engrave, but it extends under the text. So it wants to engrave the whole circle. Even where the text is, because there is pink under there even though we don’t see it through the black of of the text.

I ended up selecting the whole image, then in the pathfinder window, used exclude, which subtracted the text from pink engrave. It worked how I wanted, but still not sure that was the best way to do it.

That was one way to do it. The Glowforge sees the filled circle as something to be engraved, regardless of whether you laid text on top. That just tells it to engrave something else in the same area.

You could also draw your filled circle and text and then rasterize them together, which effectively brings the design down to a single engrave object.

Be sure to flip it if you are doing a stamp.

As long as it worked! I usually use Pathfinder…Minus Front (with the item to be subtracted in front of the circle) but in Illustrator there are often several ways to do the same thing depending on the figures and how they overlapped, etc.

If I was making this, I would do the following (keep in mind, I’m using Inkscape, so the termonology could be different):

Here is what I ended up with.

This is what I have in the GFUI. 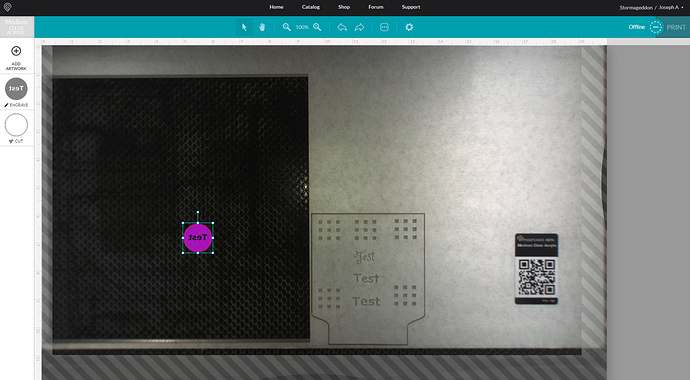 But, there are multiple ways to do it.

That’s the way I did my leather stamp - using the exclude. Works great, just don’t forget to mirror the text.

That’s what you needed. Pathfinder operations are your friend when it comes to designing for the laser. Most of the time what you want is not things on top of other things, but a single combined shape. So you’ll be using those merge, exclude, subtract, etc., buttons a lot.

it wants to engrave the whole circle

Ah! I see what you’re getting at now. Yes… Excluding is exactly what I’d do. I see others have some other ideas that will yield the result you’re looking for. But it looks like you got it!