The previous owners of our new house hid the house numbers under the gutters for some reason. We installed a mailbox at the street the day we closed on the house (the mailman still walks door-to-door in our neighborhood), but I didn’t like the ready-made numbers available at the local hardware stores. After unpacking enough to set up the Glowforge (and chasing delivery trucks down the street a couple of times), I created a file in Illustrator and tried converting it into an SVG.

It took a couple of tries to get the settings correct so that the Glowforge cut all the way through the 0.40 -inch styrene, but pretty soon we had numbers. I would have placed the numerals closer together to conserve materials, but the styrene was cheap and I needed a template to make sure they were properly arranged on both sides of the mailbox. I’m just a little bit compulsive about that kind of thing being exact . 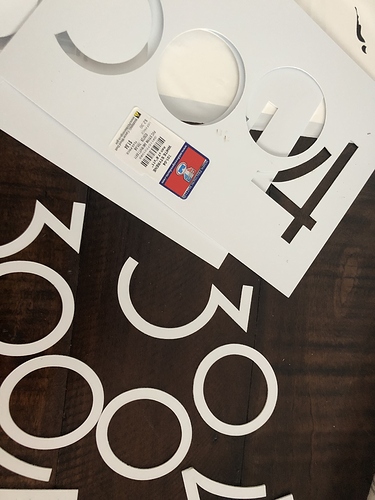 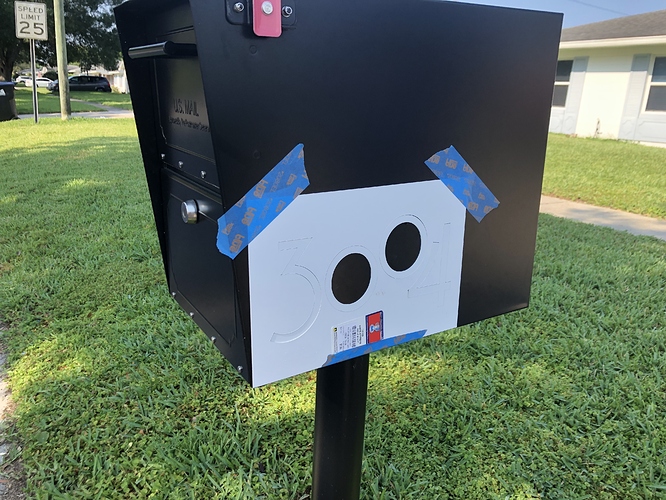 And voila! House numbers with personality! 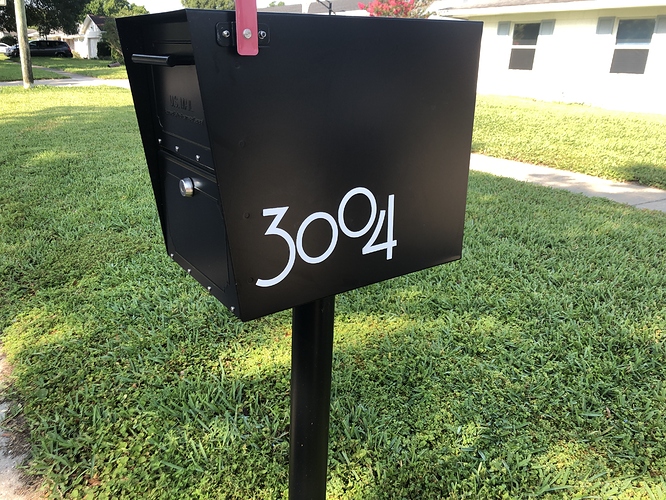 And a fine job it turned out to be!

As a guy whose job entails lots of home visits, I salute you. My phone gets me to the house and then there is no clear house number and the mailbox is across the street with five other boxes. Anything that helps the cause is appreciated. And nice font choice.

As a guy whose job entails lots of home visits, I salute you

Plus one on that! On the ambulance it’s always late at night, super dark (we’re somewhat rural so streetlights are not common) and the number is on the house…100 feet down a driveway in the woods

There’s a town ordinance requiring numbers on the house but a lot of latitude about design (and no requirement for illumination) and nothing for the streetside where it would be so helpful.

Anyone who does a visible mailbox mounted number gets kudos!

Looks great! I think projects like this with custom results for everyday objects are so satisfying.

we’re somewhat rural so streetlights are not common

Huh, I thought fire lane numbers were required everywhere. It must be state by state.

Thanks! We’ve had several near-misses with package delivery from carriers who complained that they couldn’t find the house number. There was also an encounter with someone who was evidently casing the house. When we challenged them via the Ring app, they claimed to be confused about which house they were trying to enter; that they didn’t know what number ours was. No real idea whether the numbers will help with that.

I’d say it’s our first “successful” project. The actual first project beyond the test cuts has yet to be finished, and the second one will need to be redone from scratch after several days of cutting provided unexpected results. We should have done more testing before getting that far, but it was so exciting to watch the pieces emerge from the Glowforge!

I have seen various times that (sometimes philanthropic) groups make arrangements to put fired tiles on the curbs of entire neighborhoods.

With one number per tile it is easy to put together the set needed. It can also be used as fundraisers for volunteer firefighters etc.

Of course making all the numbered tiles by Glowforge and spraying them with paint that will light up in UV would be a bonus, and knowing they would be very bright in UV would aid a lot in finding the house on the darkest night.

It must be state by state.

Town by town in CT

put fired tiles on the curbs of entire neighborhoods.

I’m on a main road that’s a town, state & national highway ( just means someone else pays for upkeep - 2 lanes & 40mph speed limit) 2 miles from the town center and I don’t have any kind of curb. Sidewalks are only found downtown. When curbs are around they’re usually rounded asphalt, not nice squared concrete or granite.

Anyone who does a visible mailbox mounted number gets kudos!

When I lived in rural Texas, my mailbox number was VERY visible. But you still had to traverse another half mile of dirt road and then a winding 100-yard (still dirt) driveway before you could even SEE the house.

This was pre-non-military GPS, and yet UPS still managed to find me. They’re kind of amazing.

Here in rural Battle Ground, WA, the houses on our road all have county-mandated number signs stuck in the ground at the road end of the driveways. (The mailboxes are all clustered at the end of the road, a half mile away.)

When I lived in rural Texas 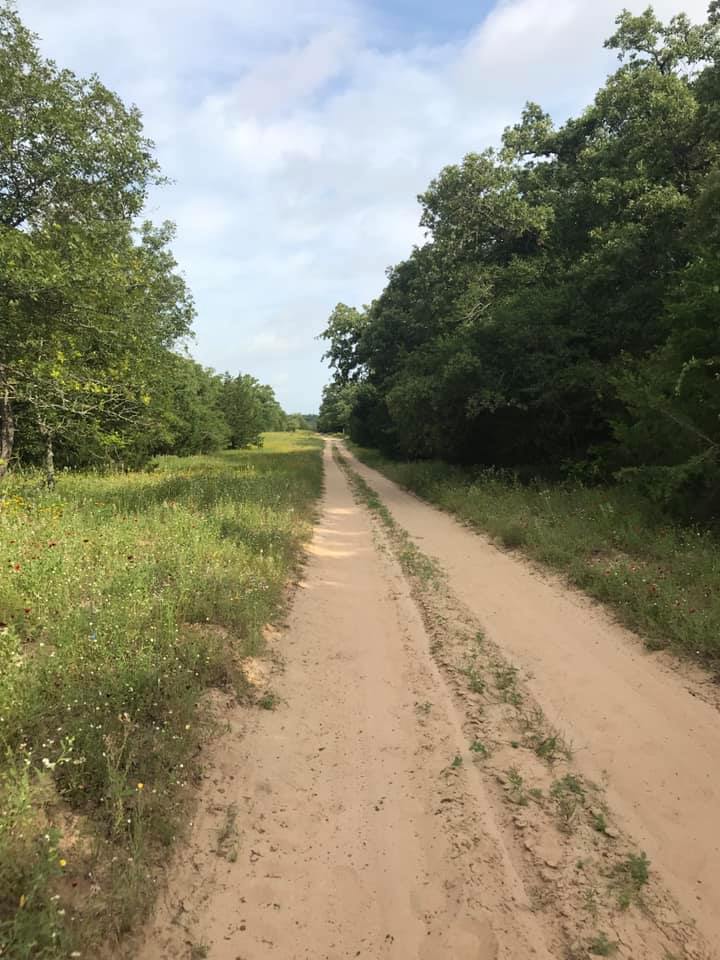 Ooooooh, I can almost see the ticks, rattlesnakes and fire ants crawling around in that picture. Are you ready?