How many images do you have saved in the app/gfui?

I would imagine you all have the stock dozen or so designs that came as a part of being a pre-release customer. Now that I have started to upload designs it seems like it could become a bit unwieldy -

Is there any way to sort them?

Is there any way to clone (copy) them to make slight modifications?

Is there any way to store them in folders for organization?

Is there way to see them as list rather than icons? For example, for sorting by date modified?

How many designs do you have saved and how do you deal with them?

No, not yet. It’s an item that has been requested for the future.

I’ve been thinking about this as a newbie too; I’ve got probably a couple dozen items uploaded on the app interface at this point and it’s enough already to make me start to think about long-term organization issues.

Mostly what I intend to do is a bunch of clean up soon, to kill older revisions and throwaway tests that are just cluttering it up and that I haven’t been cleaning up as I go.

The flip side is: while I don’t have a specific reason to distrust the GF app, I also don’t want to invest any expectations in it storing/organizing my design files. So my focus is on keeping stuff organized on my own workstation and backup processes – it’s quick enough to upload something again that having the security of knowing where everything is locally and how its organized is a better use of my archiving/sorting energy.

Would gladly welcome a more featureful interface in the long run, in any case.

I imagine power users must be going crazy? I’m sure some of you have 50+ designs in there?

Is there a software roadmap calendar online for us to keep an eye on?

I’ve got about 120 or so, usually with multiple variations. I organize them on my computer for now.

We don’t hear about changes to the software until they’re implemented though.

I used to keep my designs there, but as you said it becomes unwieldy. Now I keep my designs sorted on my PC and delete the file from the GFUI once I’ve finished with it.

Honestly, having used a much more mature online cutting interface via Cricut, I can say that they haven’t really cracked the sorting issue either. I find that there is no real substitute for a good local folder system.

I back the entire folder up to google drive via automatic sync. This allows me to use it on multiple computers.

I maintain a google document of all my ideas for future projects and color code the lines by stage of completion. This file also contains a list of settings.

I have an ever-growling list of bookmarks that are largely unsorted about art sources, tutorials, materials, etc.

I need to get in there and delete a bunch of them - I’m bad about cleanup in the GFUI.

On the other hand, my onboard file sorting system looks like this, a Laser Designs folder, with a separate folder for each design, in which are the iterations, the build notes, the photos of the project, any assembly instructions I’ve written up, ideas on what caused failure, etc. 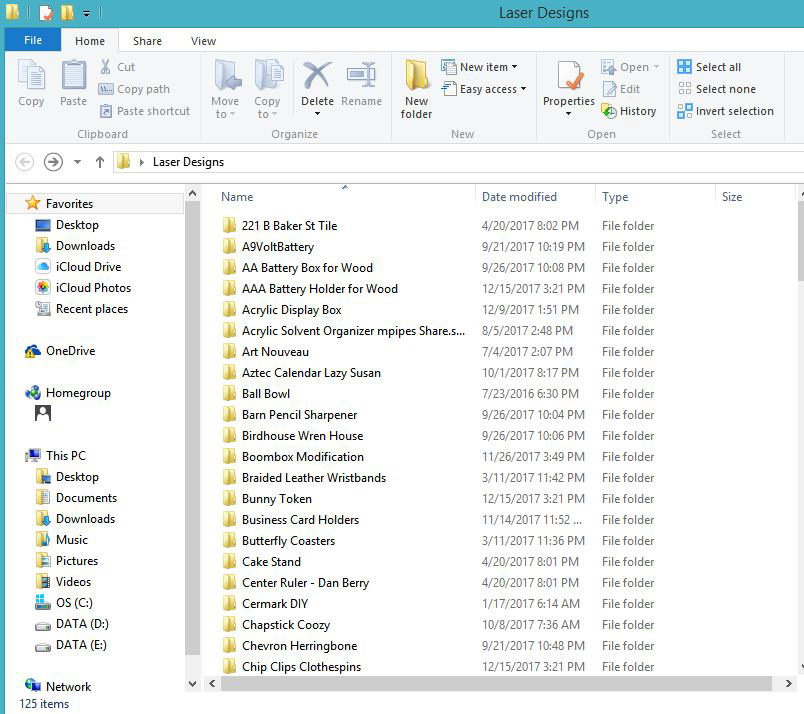 This makes a lot of sense. I need to get off my duff and start organizing my stuff. It’s all chaos right now.

I have at least 200 but the vast majority of them can be safely dumped because they’re either tests, or the source file is on my local drive anyway.

I keep them almost all local. I’ll upload my working stuff for the day and that’s about it.

I have tons of designs (dozens) but since they only save the file loaded in first, not additional artwork, positioning, settings, etc., I only rarely reuse ‘saved designs’ other than to re-print what I just printed, so I rarely go back to previous pages of designs.

Thanks for the ideas everyone. I’ll make sure the team gets them!