How to minimize the number of steps 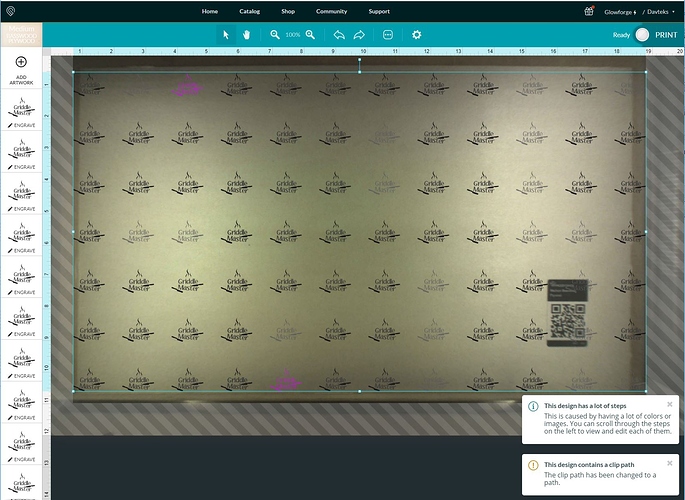 I am trying to save time by asking for help. How do I get all my Logos to be combined in one step? Right now when I upload my .SVG file, Glowforge breaks all my logos into 72 individual steps. I don’t know how I did it earlier but I did. I have a project where they are all in 1 step so the laser goes all the way across back and forth to complete each row, not one label logo at a time.

I was hoping someone will know what I have to do. I thought placing them all on the same layer would work. nope.

I can tell you the logo has 2 colors. Red & Black. But when it brings the svg file over, it is all black. I understand that and it’s all good.

Any help on this would be very appreciated.

I assume this is a raster/pixel logo?

So - it’s going to treat each image as an individual operation - as you found out.

A couple of thing you can do:
Bring just one logo into the app and copy paste and it will treat it as one operation (I don’t particularly like this method).

As far as the red coming in as black - it’s converting it to grayscale.

If you are using illustrator a good thing to do will be to go in and take a single logo and expand the layer containing it. Look at each item present and handle the clipping path. ( you can right click and convert it to a path ).

Then look at how many layers are present for your logo and try to combine as many of them as you can. From the image give there does not seem to be many overlapping sections so pathfinding might not be the best tool, but it’s worth a try.

After this take a look at the colors. You mentioned that there are two right now. Are they necessary for your print? Are you having the glowforge do something different for each color? If not consider making the logo all one color.

After you have finished simplifying the logo by removing unnecessary layers and converting your clipping paths to regular paths, then go ahead and group the logo itself and then duplicating it into the grid you have in the image above. When you have that all set then group that layout together.

Export your final artboard as an svg and as a png using the Export As… menu item. Import the png into the glowforge app and see how the glowforge app interprets it. Given that the design is fairly simple this might get you the desired results. If not then try the svg version. If nothing else it should reduce the number of steps that need to happen. In general when things are the same color and in the same layer, I have noticed that the glowforge app tends to group it together in a single step.

I hope this helps.

Couple of other things to mention…if you are planning to cut out around those individually (make tags or something smaller) then you are about a thousand times better off if you include the cut lines in the same file. (And use one less column of tokens.)

Reason is - cut lines included in the original file will align perfectly with the engraving … there is no way to do that easily if you are trying to eyeball it after the fact. So you want to create any cut lines around a single token first. (You might have cut lines in there underneath all of the engraves and i just don’t see them in the screen shot…I’m just letting you know in case they aren’t there.)

You have to use one less column of tokens to give yourself some working room there with the engraving. If a cut line is around an engrave, the GFUI will treat it as one object, and the cut line will fall outside of the engravable area on the bed. You can engrave everything, try to come back and cut it later, and lose two whole columns of tokens at the left and right sides. Never try to fill up a sheet to the very edges of bed cutting and engraving limits. Give yourself some room. You can use the leftover scraps on the side and top later if you want to, in a separate run, by rotating the leftover scrap 90° and sticking it in that way.

That gives you one large engraving, and a bunch of cutlines perfectly placed on top of it, and the file will be a lot easier to handle.

Opinions differ, but my preference is to rasterize anything I plan to engrave. Do it at 600dpi and you’ll never notice the difference and won’t have to worry about weird interpretations of fill rules, too complex a file, or being split up into hundreds of pieces.

You do, however, need to make everything black because it will end up interpreting your red as a greyscale level and you probably don’t want dithering.

^^ This is some solid advice. Getting your cut layers sorted has definitely been a lesson I wish I didn’t learn the hard way the first few times I printed something.

Do you have the logo in a pure vector format?

Is it all the same level of engraving for the different parts?

If so, you can Select All and Combine.

I’ve done that with multiple copies of a design spread throughout the whole bed. Usually I do smaller groups though. Just in case there is an issue there error isn’t propagated to the whole operation.

It is a good question in terms of work flow. While setting up a whole bed worth of items seems to be efficient, sometimes the length of the print is such that it creates other problems to manage.

I would really like to thank you all. Because of all your suggestions, I was able to complete the task. Very kind of you all to take time out to give some wonderful information. 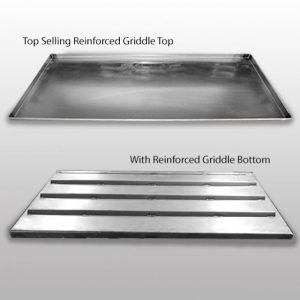 While it is annoying that they are separate actions… you might see a faster performance this way. The laser has to traverse a lot of open empty space. The time you spent applying settings (save your settings as a custom engrave, like “logo engrave”, then you can just one-click the settings) will probably be shorter than the addition engrave time as it scans back and forth for no reason.

Just a hunch, you’d have to try it out to be sure.

The total job could be about 10-15% faster that way. The head has to accel/decel at every single image and it’s traveling 12X the number of passes on the Y-axis so in the end it almost washes out.

The faster the engraving speed, the more accel/decel distance needed so the longer passes might work out better at some point.

Yup. That’s why I said you’d just have to try it. The math is hard to work out.

I’m new to laser cutting and my wife and I are expecting our GF in June. Having owned a 3D printer and CNC router I know it’s best to prepare hence I came across this topic.

I think good nesting software is also key in minimizing job time. I bumped into Deepnest, which is open source. Does any one use this software at the moment?

A few folks have used it but it seems to be problematic. The alternative svgnest seems to work more consistently although when deepnest works it’s a bit tighter.

A fair number of posts for each are on the forum.

So, you might think this, but it’s been stated that the position and order of the jobs being run (as in the traveling salesman problem) saves a surprisingly little amount of time.

Others may chime in and prove me wrong, maybe there’s an underground of deepnest users out there. I just can’t say I’ve seen much beyond people saying they tried it and “eh”.

Hey now thanks! I’ll give svgnest a looksee

Indeed nesting will not influence number of steps but can be beneficial cutting down on job time plus material usage .

After trying several free nesting demos I came across “eCut”.
It’s not free and it’s a plugin for Adobe Illustrator. I payed for the full pack and in my opinion it’s worth the money.

I payed 65.66 CAD. I’m convinced this will benefit me and maybe could benefit other machinist, operators and creators too. Check it out, there is a demo but it won’t allow you to save the nest to use for a job!

Just so it’s clear: I have no connection to this program what so ever.