Semi Inspired by the following project

Veener for Anker Power Bank Made on a Glowforge

I wanted to see if I could wrap a Anker Power Bank/Battery with the Proof grade veneer. A little planning, some paper practice, and it came out beautiful! [IMG_2301] [IMG_2303] [IMG_2302]

I had been wanting to do something similar, but for my water bottle. When you have a Glowforge, these sorts of projects are made simple! 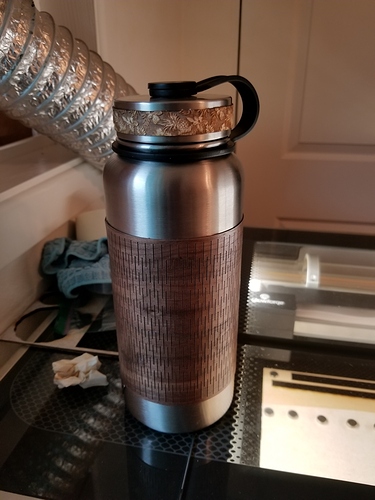 I had cut a strip of veneer as a test with a tropical print on it for another project and had just started playing with it and thought it might look good as a grip for my lid, and I really like the way it came out! 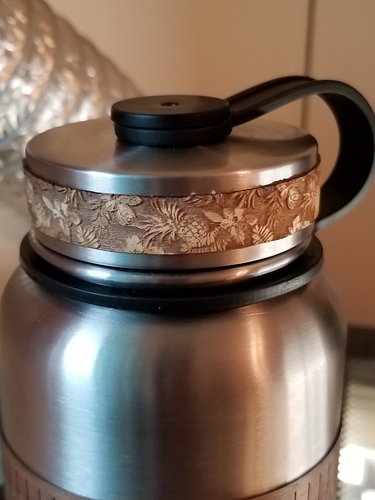 Oh, beautiful! I never thought you could get a 3D effect like that with veneer. Will have to try it…

did you do the living-hinge wrap around the body of the flask as well?

I took the masking off, and used the SD engrave with a bump up to 340lpi. That’s my go to setting for most images.

did you do the living-hinge wrap around the body of the flask as well?

I did. The cap I didn’t do any on it because I figured the engrave would be good enough and while it was stiff, I used my wife’s hair dryer to apply it slowly. That actually helped a lot for the radius of the bottle, too.

I love the tropical touch, as well! I have some fun ideas for other stuff, you’ll see

These are awesome! How have they held up? I was searching the forum to see if anyone had tested the veneer for something similar. I’m curious to see how they stand up to wear & water, condensation, washing, etc.

Excellent question! The veneer has held up extremely well, at least on the outside of the bottle itself. As for the cap it’s gotten pretty dirty lately, but I’ve not wanted to try washing it out of fear that I would ruin it. I typically hand wash the bottle, but only the inside of it. Here are some pics, as you may be able to see, the bottle has had a rougher time than the veneer! 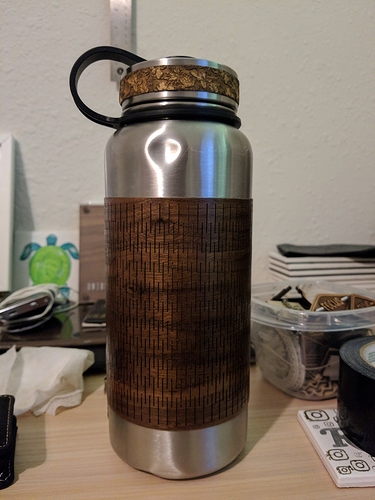 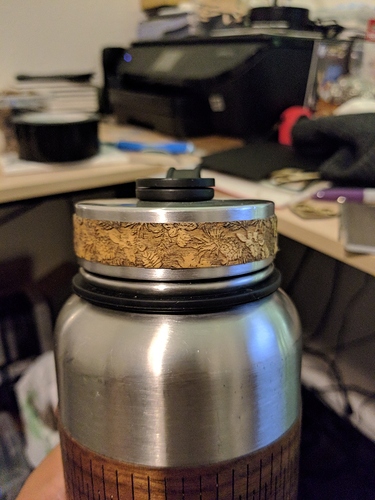 Looks great, glad to see you managed the storm.

What’s interesting is that by the time it even got to our island, it was like a regular rainy day. Lot of people are online trying to sell their extra supplies they bought because it was no different than a regular cloudy day, really. I’m not sure why they don’t try and make more space (which is hard to do) but this is only the beginning of hurricane season. It was a real eye opener, thanks again for the support!

Yup, our island was flooded with $2k plus 6000w generators after the storm, then when power was restored 6-7 months later, everyone was trying to sell them. Stores are full of overpriced Generators, etc.

You are so right, just because you dodged the bullet, water, tp, “SPAM” etc. don’t go bad, have a long shelf life and can be rotated. But if the event occurs, no amount of money can get you the basics…

I work at a bank, and everyone was withdrawing money - it was pretty crazy. Luckily we have cash at home (mostly from selling Glowforge stuff!) so that wasn’t as big a concern.

Cash is king after a storm. Nothing works, ATM, Credit Cards, Debit Cards, etc. It becomes really disgusting as to what people will do. I’m so glad it passed you. Blessings!