Ignore this whole thing – it works totally normally and as expected now.

I have a basic. I can engrave anodized aluminum, with good contrast, at 1000/full – settings that I’ve seen others mention a few times – but only when the focus is set much higher than the actual thickness. At .05, it doesn’t seem powerful enough. At the correct height, I have to slow the speed down to 500. Setting the focus slightly above the thickness doesn’t work either. Even setting it to .1 doesn’t engrave the coating.

Obviously, I want substantially faster. Because faster. Does that mean the unfocused laser is more powerful than when it’s focused? Is there any reason I shouldn’t engrave with an unfocused beam? Like, will it make everything slightly bigger or substantially blurrier?

Is there anyone else with a basic who has the same kind-of problem?

Do you have photos you can share? I’ve engraved quite a bit of AA, and always had great results with accurate thickness settings. My experience is that 50-60 power is plenty - I don’t see significant differences with more power, so I save tube life by using the lowest power that gets the job done.

AA is one of the few materials that actually support very high LPI settings, btw, but of course higher settings = longer runtimes.

Proper focus brings more power to bear than a defocused beam. Think of focusing sunlight with a magnifying glass.

Think of focusing sunlight with a magnifying glass.

I wonder if you could etch anodization with a good magnifying glass…?

Like almost everything else, there are different types of anodizing. I don’t imagine you’d even touch the good (hard) anodizing. Probably not the cheap processes either, but maybe one of the home brew ones, with the right glass and focus.

Rock on the other hand…

Yeah, that was what I thought should be happening, but it’s definitely not what is happening. 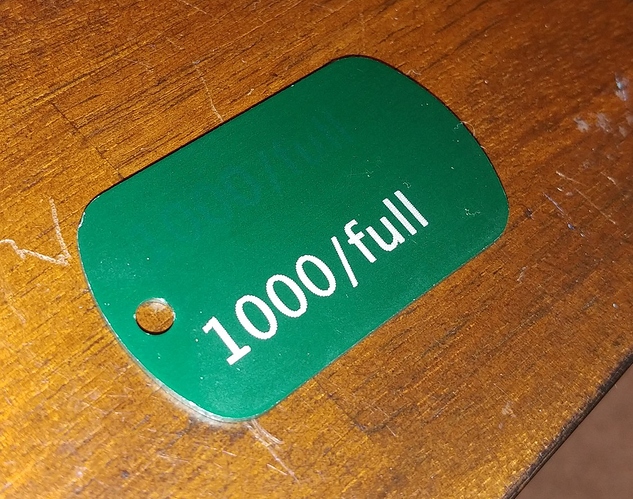 Is something seriously wrong here?

Is that actually anodized? Or is it coated? That looks awfully white and uniform…like maybe it’s a white coating with green on top, and you just engraved away the green part. The anodized aluminum I’ve done has been kind of reflective and uneven…looks like metal underneath.

When I bought them it said they were anodized aluminum but maybe they aren’t? They Chewbarka tags if anyone is familiar with that.

But if they aren’t, would that change the focus/power thing? Shouldn’t correct focus require less power? Or at least be as powerful?

Maybe defocusing is just removing the top layer of the paint. I actually saw something similar with the two-tone acrylics…you treated it very delicately, and got some great effects. Focus a little too low or hit it with too much power…and it wasn’t as complete a removal.

I really like the effect on it though - that’s a beautiful white. I’d just keep using the defocus for that kind of tag. Whatever it is…it’s working.

I’m kinda clueless because I haven’t done tags and therefore don’t have a sense for what “the correct thickness” is. (I probably don’t have anything constructive to add, I’m just intensely curious!)

Sorry about that. I meant that the focus was set to the actual thickness of the material (.05). I went back and tried to make it clearer

Annnd now it’s working with the correct focus height and 1000/full. I literally tried to figure this out for hours yesterday. The answer is probably a glitch in the matrix.

I give up trying to figure out the glowforge. Magic has no rhyme or reason.

I really like the effect on it though - that’s a beautiful white.

The chewbarka tags are pretty expensive, but you can get them for good deals on ebay sometimes (I paid $40 for 80 tags – I do not have 80 dogs). I like that they engrave is bright white rather than metal because it makes dog tags easier to read. I mean, dog tags on actual dogs. Dog ID tags. I’ve had one on my dog for a couple of months and it’s holding up really well.

Yeah, I picked up a small batch on Amazon for Snapmark testing purposes, and still have most of them left. They were pretty cheap. (But tags do look cool…I’ll figure out something to do with them later. Maybe pick up some better ones and do stocking stuffers for the kids.)

Haven’t read all replies. Is it possible that your scanning process didn’t hit the tag so it threw off the autofocus?

I genuinely have no idea.

I did randomly start having a bunch of problems with snapmarks yesterday (right before I started having this weirdness) that also spontaneously resolved itself. Maybe the two things were related?

Two types of effects on anodized aluminum.
For the correct form, it actually does what it did in the pic when done at the correct settings, turns a color, usually white. The other option is that you remove the coating and get the aluminum shining through as @Jules described.

Chewbarka sells the correct type that turns a color, they also sell coated steel that you can remove the coating and reveal the metal underneath.

You can use some acetone to remove the remainder of the etched coating to make it uniform…on the coated metal tags where you remove the entire coating. 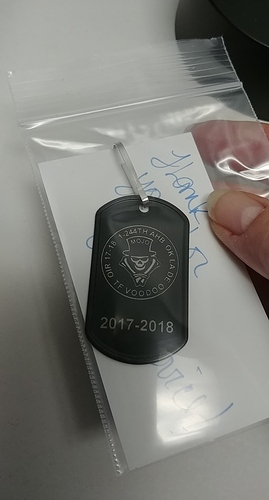 What do you think is happening? (Serious question, I’m not being a jerk)

White anodized aluminum is not possible. The molecules of the color are too big to fit in the pores of the aluminum when anodizing. I make parts that are sent out to an anodizer. I have been through many companies and they all say the same thing. Our current company, who we have been with for years, actually took the time to explain it to me.
It’s also not possible to anodize a color on top of another color.