I created the design but I don’t know how to correctly make it engrave part while leaving the other part still connected. 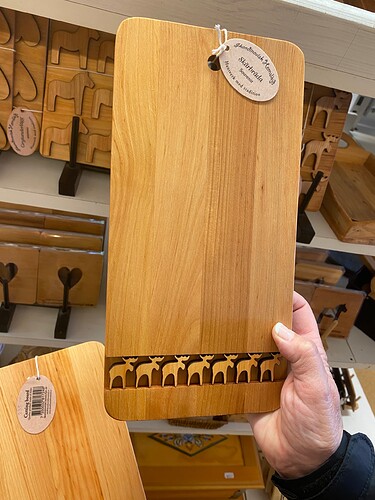 the moose look like they were cut out of other wood and glued in there and maybe that’s just a straight block deep engraving? Just my thoughts, If you look at the wood and where the moose are the patterns in the wood are different like it wasn’t engraved at all, see what I’m talking about!?

In your artwork leave your moose white and make the stripe surrounding them black.
If you’re using a vector program - knockout the moose so nothing is overlapping. Or rasterize the art before sending to GF. (Pathfinder/Boolean subtract etc. )

I looked at the board on their webpage, and the moose are clearly glued into a groove created by a router. You could buy the actual board or struggle to engrave something similar. You won’t get the depth with your Glowforge. 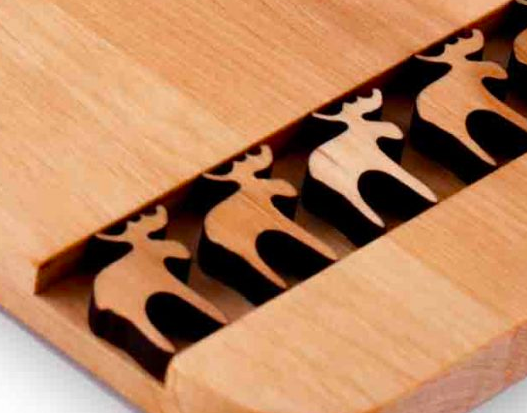 Agreed. No way to replicate that by just engraving on the GF - although you could come pretty close to the general look. The problem is that the natural variation in wood density means you would never get a perfectly uniform engrave.

Here’s an example of just an engrave, using a scrap of poplar I had in the machine from something I was working on earlier.

You can see the variation in engrave depth (I took the pic from an angle to better show that on the side) but also the inconsistency, plus the “banding” you can get depending on LPI settings (this was 1000/full (pro) 340lpi)… Obviously I didn’t bother using any masking.

90% of people would think this is great. Me (and many other makers) not so much…

The original design would be impossible to clean. I agree with eflyguy that the rastered background doesn’t look great as a finished product. To solve both problems, you could fill it in with some colored resin.

Just a point of clarification - the image is vector, not raster. The banding has always been an issue regardless of image type, and was brought up to support several times - they chose not to address it. I very rarely use raster other than for photographic images. The spacing between the bands varies based on LPI settings, nothing to do with hardware (i.e. the belt tooth spacing.)

The spacing between the bands varies based on LPI settings,

Here is the comprehensive test I did, engraving a solid vector shape at various LPI settings.

Yes. For some reason the machine introduces artificial banding even in solid areas - the example here uses rectangular vector objects. It varies by lpi. This was also Proofgrade acrylic. Acrylic shows the problem more than natural materials. [image] You can see it in the deeper (PG 3D engrave) sections of this piece, for example: [image]

Thanks everyone. I took the first suggestion and rolled with it. It turned out good enough for my mom. I can totally see how a router look would be much more smooth. However This worked out for my project. I appreciate all the helpful information! 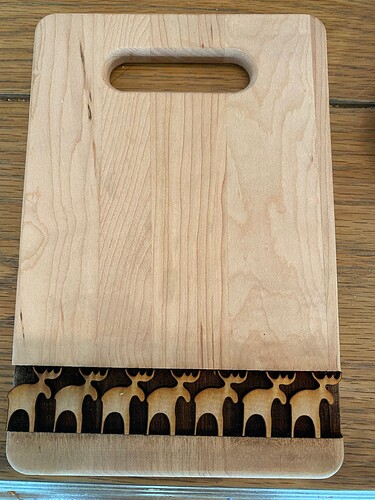 Picture was taken before I cleaned up the burn marks and or glued them down.