This is a work in progress logo. As some of you know I tried this before with engrave and the Glowfolks helped. But, 18 minutes for a 2" square logo, was still too long for me. I made everything paths to score, and using what I tested last night with unfocused height, set out on my next journey. This logo took 0:33, much more doable, but the paths I created with the paintbrush tool were cut by the laser around the perimeter. Not so bad for the “S”, but the small “even” is a mess. How do I get the GF to only score the center of the letters? 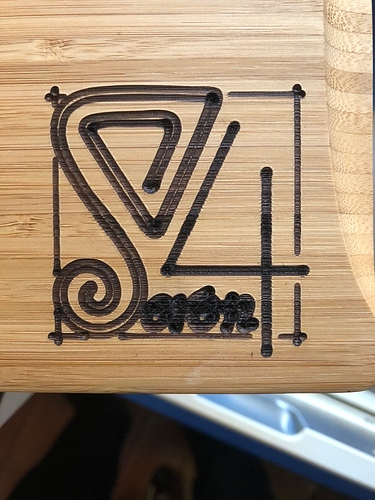 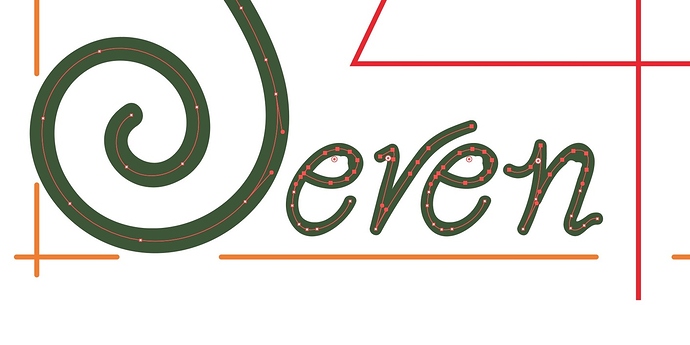 The GF only scores the center of a path. I’m going to bet that there is something in the file that is showing a path around the outside of the letters. You will need to post the file unless someone has run into the exact same thing.

Unless you tried to take the JPG, upload it to the GF and convert it to scores instead of engrave. JPGs are engrave only. Can’t really do that without the GF interpreting the lines as closed paths. Really needs to be an SVG to do a path score.

The GF only scores the center of a path

I only uploaded the jpg image to show the paths. Here is the svg
CuttingBd-Back-LOGO.svg.zip (2.8 KB)

Sometimes a picture makes it easier to explain: 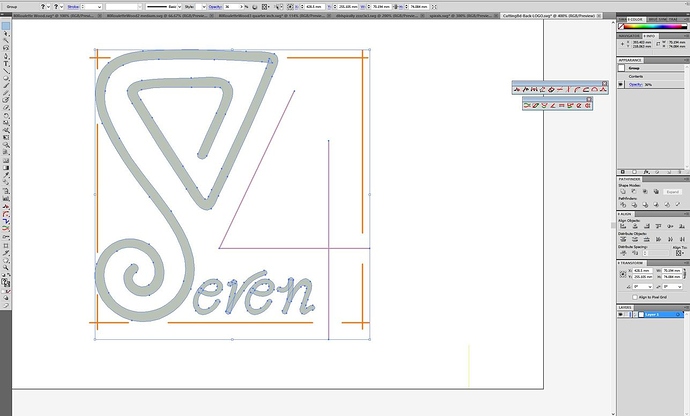 See the blue lines and nodes in there when the items are selected and the opacity is reduced?

Those are the actual vector paths that the laser beam will follow when the machine decides where to move…when you set something to Cut or Score, the beam always follows exactly along the center of those vector paths.

What you have created with the paths is an outline of a filled shape for most of the letters, so the beam is going to trace around the outside of the filled shapes that you see. Just because the shapes look like letters, it doesn’t mean there is a single vector path down the center of them.

If you look at the number 4 though…that one is set up to Score correctly. The path runs down the center of the stroke. It’s an open stroke, not a closed path around a shape.

If you use the pen tool to create the letters, by placing a path in the middle, you can score it correctly. Or if you cut the closed path and delete one of the two vector parts that define the shape, you can Score that the way that you want to do.

(More on this is the tutorial below if you have time to look at it, but basically, you’re getting hit with a double trace line around the shape.)

Quick Fix - Use the Pen tool to create your letters.

Quick Fix - Use the Pen tool to create your letters.

Thanks Jules. I’m just super terrible at smooth curvy paths with the Pen. The “4” was easy. architect=straight lines. The brush I did with the mouse, then tweaked the paths. I just don’t understand why it shows me an orange path (look back at my screen shot), if it’s not going to follow it. My hope was there was a way to boil down the brush to just have that path. When I expand, I get what you show with the blue.

Yeah, I don’t understand it either.

I don’t use the freeform tools much though, so have very little exposure to them - maybe there’s some kind of logic in there, or maybe they’re just weird like text.

but when you export to SVG, there are no special effects like brush strokes. so it converts the outline of the brush stroke effect to a shape object instead of a line w/affects applied.

so illustrator reads the line and applies a shape effect to it.

That turned out to pretty much be it. I noodled around on the web. The “Brush Definition” needs to be set to “Basic.”

This is the final result. 25 seconds. The “e v e n” is still too wide, but that’s a direct result of the cutting board being too far from the laser head. Until these become “for sale” works, the giftees will be the guinea pigs. 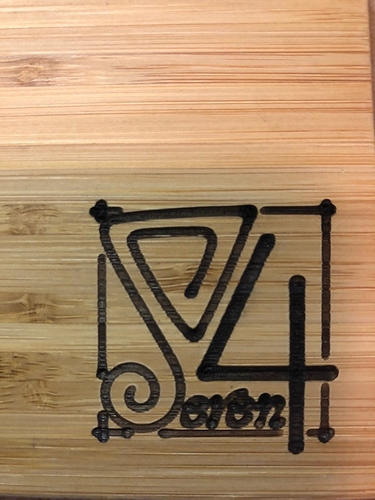 Yeah that’s much better!
(And I learned something today, which makes it a win!)

what if you use different levels of defocusing? i would defocus the “even” less than the rest to get a lighter stroke on the score.

i would defocus the “even” less than the rest to get a lighter stroke on the score.

My next try for the “even” would be slower and less power. Right now it’s at speed 500/50% power. I had two gifts to make and they are done. Now, on to another avenue.

All of this is moot for anything except the 0.58" thick cutting boards I bought.