I'm leaving, on a jet plane

As many know, my son is a commercial pilot, so a lot of stuff around here is aviation related (and my father was a pilot also). I decided it was time to finally make the “working” jet turbine model that people often display at trade shows, etc. It is loosely modeled on the engine used in the 737-Max, and was originally modeled in Catia. As 3D printing projects go it is absurdly complex (I mean it is basically a full model of a jet engine, with all the parts that entails.

It’s about 300 hours of printing (I have a little glow forging I will do for the sign for the stand) so have 3 of my prusas printing pretty much around the clock. Since bananas are the standard unit of measurement, this entire thing prints out at the size of a bunch of bananas on the tree (briefly went down the rabbit hole of banana grouping nomenclature). Anyway one of the more fun things I did for this was I found a really stunning copper colored PLA filament (Matterhackers Build MH PLA - Copper); honestly it’s more like copper than copper! I used that for the high-pressure turbine section. In addition I added a 1W red LED into the combustion chamber so it glows bright red with the copper PLA)

The model is too large to fit onto the bed of the Prusa i3mk3 (I did preorder the XL but that’s a ways off) but in the download there is a split version where you can print sections and bolt them together. This assembly uses over 300xm2.5 screws, 6 large 40mm bearings from McMaster, several bent steel wires, some neodymium magnets along with all the printed parts. it is powered by a 12V gear motor that lives within the tailcone (with the tip of the cone being the on/off switch). Like a real jet engine the fan at the front is not rigidly connected to either the high or low pressure turbines (and can spin independently, but ultimately all get spinning in synch).

One cool item is the spinner on the front of the fan which as most of you have seen on a real jet has the white swirl, which to make printable without a multi-material printer, you print the white stripe as a flat strip, heat with a heat gun and bend it into the groove on the spinner model 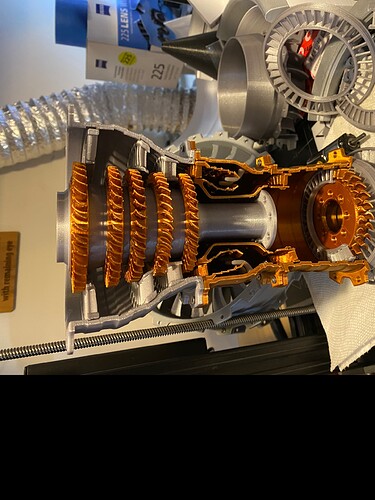 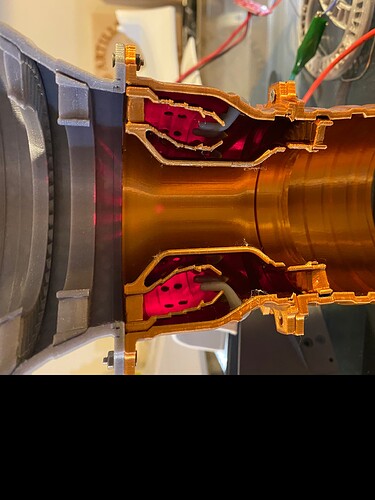 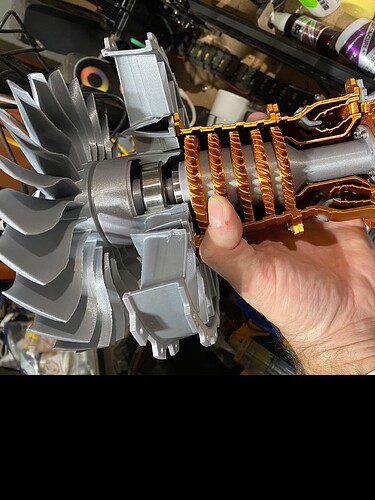 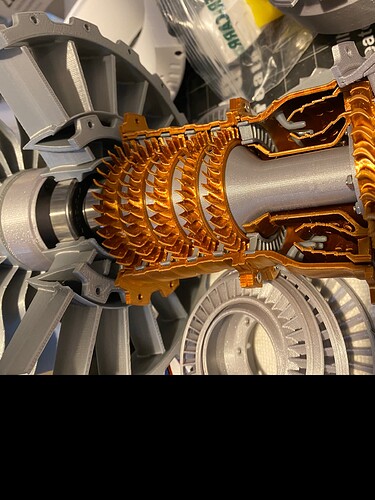 IMG_90061920×2560 394 KB
Here you see the stators for each hpc stage (the stators are stationary between the spinning blades to stabilize air flow through (prevent swirling to prevent centrifuging the fuel out of the air). The engine has 1 quarter missing so you can see the internals. 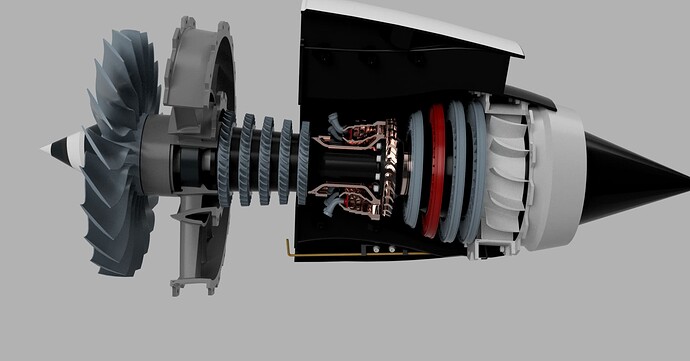 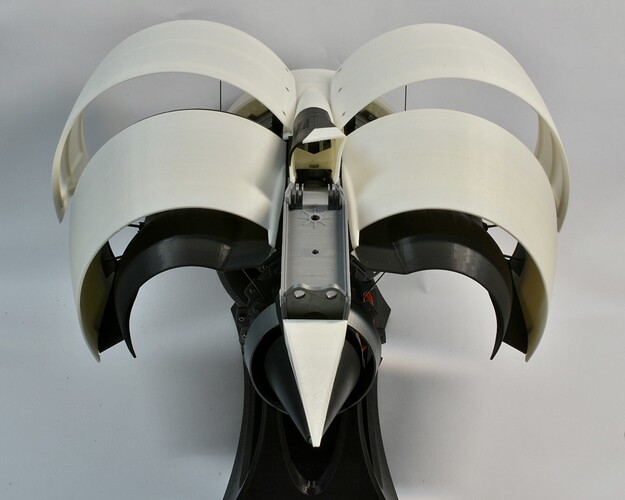 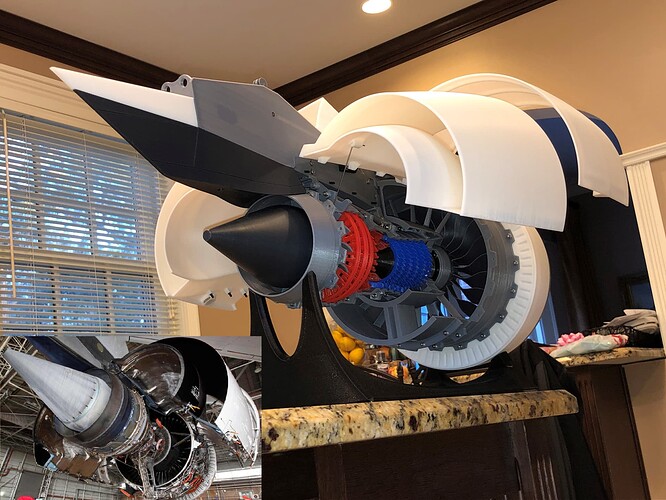 One of the biggest challenges is keeping the printed parts straight. I mean honestly each of the turbine blades looks like every other one. So remembering that this is the stage 3 vs stage 2 blade pack is almost impossible to remember what is and is not printed.

One of the most fascinating parts of this model is that the parts have modeled in supports (rather than generated) which remove cleanly and print much, much, much faster

I would add I was turned onto this specific version from Karl at 737DIYSim (who has gone waaaaay down the rabbit hole!) who lives in Brunei and has built an entire 737 cockpit in his house! He is super nice and we WhatsApp on 3D printed simulator projects and he is always happy to help out.

Amazing work. So glad you are not really leaving us (be careful out there!).

That’s interesting, I’m curious if there’s a specific technique for that.

That is simply Stunning…

Hard to find the right words to describe how impressed I am by this body of work.

It could be a Catia feature? (It was sold to dassault before I joined IBM). Once I get my prusa XL with the tool changer I will probably do a lot of dissolvable supports (or at least dissolvable interface layer)

Wow… Yeah, just wow is all I can come up with.

That is mind blowing! The copper PLA is a great touch too.

That looks so authentic you might as well build the rest of the plane and fly it!

Wow, so far above my knowledge base:-)

Wow… Incredible!! That “flew” right over my head!

P.S. Now this song is in my head. Hahaha

I have a friend with a 3d printer and he makes it sound like it is a constant battle to keep everything from turning into spaghetti and catching on fire. I can’t imagine having one, the Glowforge has spoiled me with being so easy to use… I definitely cannot imagine running 3 at once.

Thought that was just a laser problem!

Your attention to detail is incredible.

This is astoundingly good, your attention to every little detail is amazing! It’s also fascinating and I could stare at this for hours!