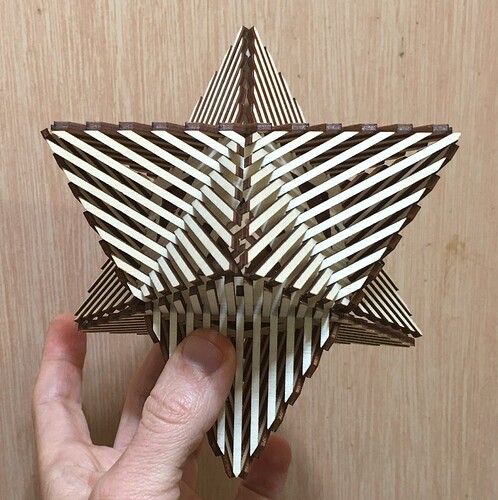 A variant on my nested polyhedra, I wanted to see if I could build a polyhedron and its stellation at the same time. This is the first stellation of an octahedron, which contains its core octahedron.

Of course the fun part is that the stellated faces don’t really exist, they’re extensions of the core shape’s face in the form of very long fingers.

It was designed to let a fair amount of light come through, it would probably make a decent lamp design. 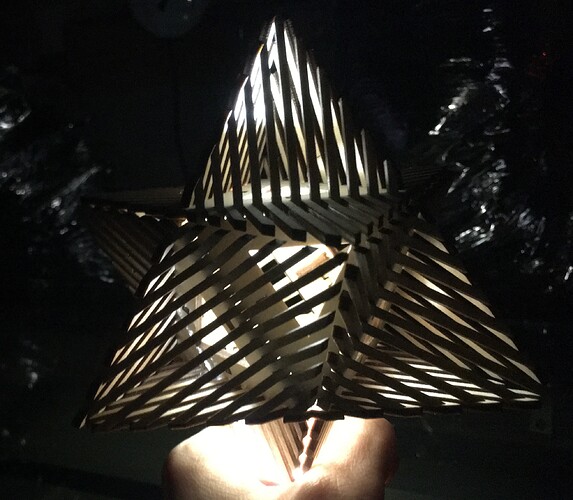 I think I just went blind, that thing looks like an optical illusion. How stable does it feel? Mind-bending stuff.

That is so cool. I’ve liked your others but this one tops it!

Sheesh, my connectors are hard enough to insert without the extra stellation sticking out. I’m amazed you could assemble it, but I’m glad you did, because it looks amazing.

Oh dude, that is so cool!

I bow before your prowess

that’s pretty awesome. Looks like it’s not too hard to assemble

It gets tricky when you do final assembly, but I gave the secret away: you build the two halves separately and mate them together.

But yeah there are 2 face styles (2 and 6 of each, respectively), and then 12 of the connectors. It’s a pretty simple model in some ways.

It gets tricky when you do final assembly, but I gave the secret away: you build the two halves separately and mate them together.

Ah true, I forgot it could be difficult since I’ve done those kinds of puzzles for a while.

It’s the fingers, they get in the way. A straight octahedron, easy enough. The long extensions on the edges to do the stellation at the same time? Not so simple.