Just in case anyone else runs into this…

0.92 has MUCH better DXF importing than 0.91. However… for the mac there is no DMG for .92 so you have to compile it (which is not a big deal if you use something like MacPorts).

Here’s the rub… if you are like me and don’t update your GNU packages too often on MacPorts/your Mac when you go to do the install of inkscape you MAY run into a problem if you are on High Sierra (10.13.x). FFMPEG needs to be updated in order for all the other widgets to play nice. The problem is that the latest version of FFMPEG doesn’t want to compile with Xcode 8.x but it DOES compile with Xcode 9.x.

Just figured I would try and save you guys an hour of trying to figure out why something won’t compile properly even thought it looks like everything is up to date on the host.

I need to upgrade the Studio MacPro to High Sierra.

Thanks for the heads up on Inkscape!!

Look, can you just stop over to the house and set it up? Thanks.

The home-brew installation was horribly busted.

Does the macports version actually have all the modules, etc, and work correctly?

I just installed the DMG from here (and quartzx, of course) and got 0.9.2.2. See screenshot. 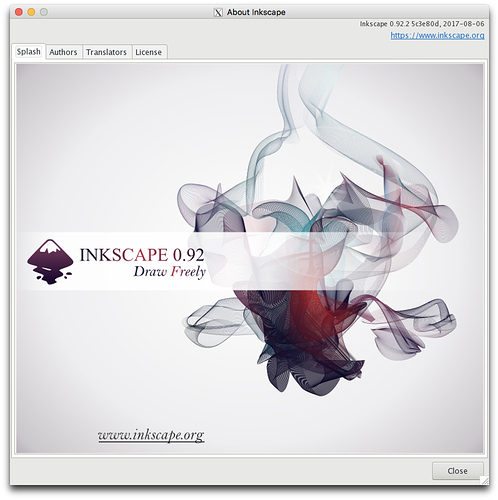 They must have JUST promoted that. Yesterday it was still showing no DMG for .92.

Yeah, it wasn’t up when I checked recently. I’m glad they finally got it done!

weird… when I had gone there the other day .91 was still the default and they required homebrew for .92 on the mac.

That just saved me some time!

Edit: actually it didn’t. I must have already Homebrewed it when I installed it the first time.

I was hoping for a solution the dual monitor issue, with requires work on the Inkscape and X11 side. I’ll do the High Sierra upgrade and pray.

I was hoping for a solution the dual monitor issue, with requires work on the Inkscape and X11 side. I’ll do the High Sierra upgrade and pray.

XQuartz still has a ton of weird issues with multiple monitors. It hasn’t been updated in ages.

I’ve not tried it on dual monitors. I have up on dual monitors a while ago… my iMac is a 27" and I have my macbook pro plugged into a 29" 4K Seiki monitor… desktop space is no longer an issue. =)

I also utilize Spaces quite a bit for my sanity.

I have a 27" iMac (5K) but I also have an old 30" Cinema Display attached. I’m considering ditching it at some point, though. I don’t really use the second monitor much anymore. It’s where I leave my Messages and Slack windows, along with email messages or text documents that I want to refer to while doing other stuff, but I could probably get by without it just fine and it would free up a lot of desk space.

I want Apple to stop screwing around and release the new iMac Pro. They said “December” but they didn’t give a specific day. I hope it’s tomorrow… but that is not likely.

They did officially delay the HomePod, so the fact that they didn’t also mention the iMac Pro is probably a good sign.

Yeah… I probably don’t NEED an iMac Pro… but my existing late 2013 iMac is getting slower and slower. I have a 3Ghz CPU and 32G of RAM and the dang thing crawls. I suspect the issue is the spinning media. All the smart sensors say the drive is fine but I have my doubts. Sadly… this is one of the iMacs where you need to use a small pizza cutter to take it apart… Not sure I want to go there. If I get a new system and get this transferred over… fine… let er rip. But since this is my main system I don’t want to take too much risk.

Guess I could always boot external and see if there is a performance increase.