hello
I’ve designed a family name sign in Inkscape that I plan to cut out with my laser. I’ve grouped all objects together and can drag them around as one object. When I upload the image to Glowforge, it still appears as three separate objects. What am I doing wrong?

The way that the Glowforge interface works is to treat everything enclosed inside of a closed shape as a single entity. So the easiest way to deal with it is to just put a rectangle with a different colored stroke around the shapes. Then when you open the file in the interface, you can set the rectangle to Ignore in the thumbnail column, and it won’t be processed.

Thank you so much for your suggestions but neither of them have worked. Glowforge wants to cut out absolutely every little shape that I used in the design as if they were never grouped. I tried putting a purple rectangle around it, but that didn’t help.

The design is to be cut, not engraved though.

Ohhhhh…I understand what happened. (Actually had a discussion with Dan about it once here on the forum.)

You need to merge the shapes in Inkscape to turn them into one unit. If you designed it using separate shapes that are overlapping, you need to make sure that all of the parts have been converted to paths (including text), and then select it and Path > Union.

Once that’s done, set a stroke color, but remove any fill color.

as if they were never grouped.

As @Jules said, you need to do a union to ensure that the paths are all connected as an outline.

The group function just puts together separate objects for simultaneous selection and operation. The combine function takes paths and unites them into one object. But the union function joins the paths in particular ways.

The design you posted is a group of eleven objects. It is filled, so that means it’s going to be engraved.

For example, your lines above and below “Hutton” are actually single lines. 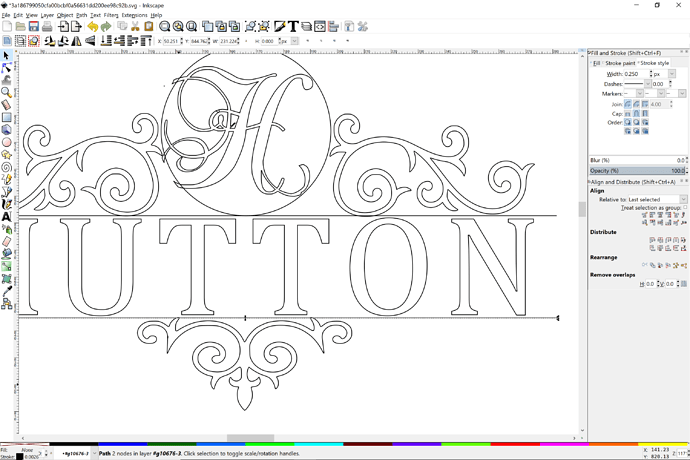 You’ll want to remove the fill and define the stroke. I usually use .25 pixels. Another way of checking to see that your lines are correct for cutting an outline that won’t have drop outs is to change to Outline view. Here you can see the distinct lines and how they would overlap and cause issues. 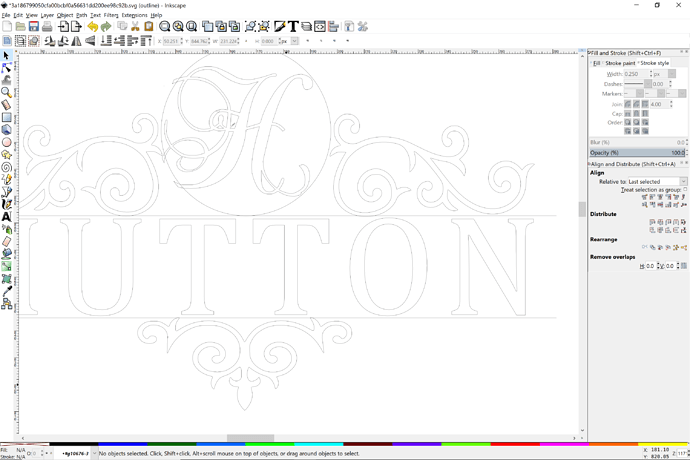 It’s almost there. You just have to work on the circle around the “H” and make those two lines long thin boxes. Then you can join things. 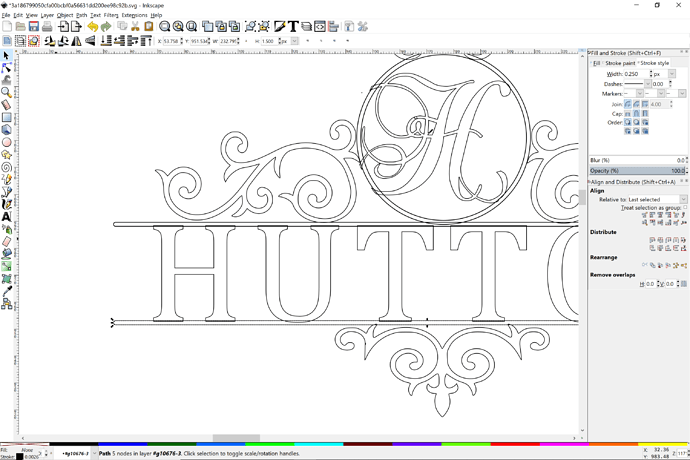 I think this is what you are looking for. This is the SVG file.

Here is a screenshot for those who want to see more easily the result. 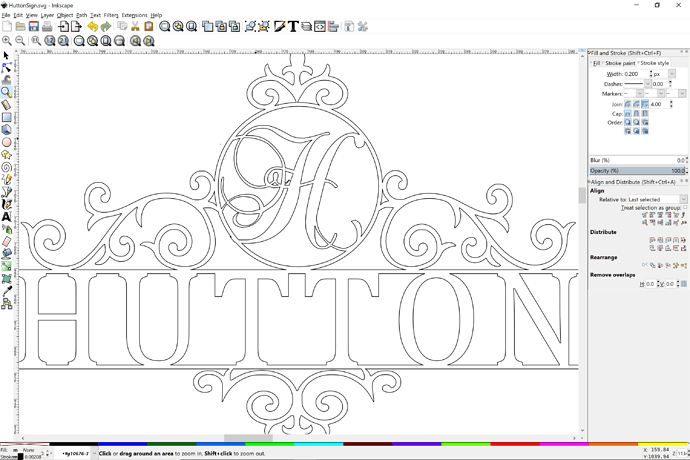 Oh, WOW! Thank you so much! I’ve been in tears over this stupid project! I have been using MS Paint for the longest time and figuring out Inkscape so I can use my Glowforge has been really hard for me. You’re a life saver! <3

I’ve been there. Learning how design with vectors requires a definite skill set. It’s is different from using a raster based design tool. There are loads of tips and tricks and lots of Inkscape help in the forum archives. Links to videos too.

Here is one I did way back. I had to learn this and folks on the forum pointed me in the right direction. Here is a basic point that has lots of applications. Text has to always be converted to paths and then it becomes an object like any other. Then you have to figure out how to merge, join, unite the paths correctly.

Inkscape Tutorial: text to outlines Everything Else

Continuing the discussion from Inkscape prep: @cmreeder inspired me to figure this technique out. Then I realized it would be a good process to try and document as a tutorial. The road to getting the screen capture and audio was tortuous (for a cheapo guy like me). After having done the routine about 50 times, I got pretty familiar with the method in Inkscape. This is the first video I ever edited (did it in four scenes) and then used Audacity to overdub the commentary. Open to comments and su…