InLine Fans - Does CFM really matter if the exhaust length is short?

I’d like to reduce the noise from the Glowforge installed fan. After testimonials of adding an inline fan, I’d like to do that. However, I have a space issue. I only have 9 inches from machine to window. That narrows my options of what fan to buy. I figured out that the CFM is probably 200.

The only one in the forums that I know works is the VIVOHOME 4 Inch 195 CFM Model and I’m sure I can make that one work if I line up my glowforge vent with my window port. But it’s bulky and will limit me reaching the window lever, and I will need to remake my plexiglass port. This is enough inconvience to ask the question of a shorter, lower CFM fan like this VIVOSUN 4 inch Inline Duct Booster Fan 100 CFM

I realized that that the shorter narrow inline fans has smaller CFM which I assume it’s due to the blade size but this will give me way more flexibility back there.

Question: Since the distance to window is short, will less CFM be doable? Or that CFM is mandory to suck the air inside the machine while it’s running? If it has to be 200CFM, is the Vivosun model the best option or are there fans that has a shorter base, smaller diamitres but still able to push 200CFM? 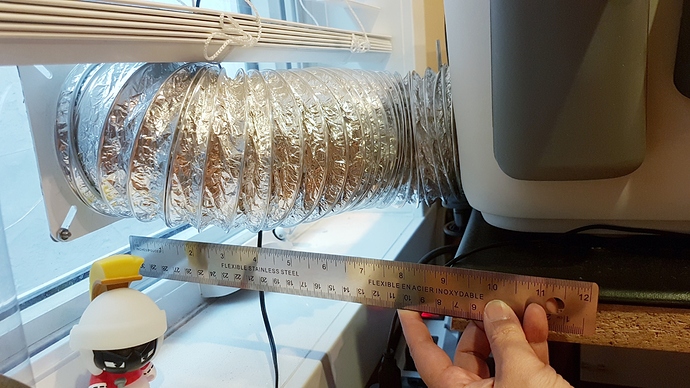 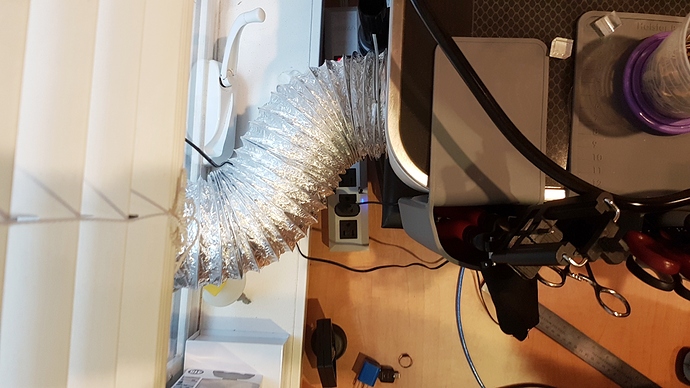 I use https://www.amazon.com/gp/product/B008CI55F2/ but it’s no longer in stock or prime. It looks to be almost exactly 9" inlet to outlet.

thank you. the diamtre is still on the wide side, but this may fit better

I have been using the Vivosun version of that same fan, $25, for two years.

I have the provided 10/12’ duct from the machine to the fan (which just sits on the floor), and then another 25’ of duct that I used to throw out the door, or an open window. So 35’ of ducting total.

Now that my exhaust fan died, I have found that I didn’t need it anyway. I get no smoke or odor in the room while the machine is operating.

Since the distance to window is short, will less CFM be doable? Or that CFM is mandory to suck the air inside the machine while it’s running? If it has to be 200CFM,

The need is to push 200 CFM out the window or whatever the filter etc. I think tat the biggest problem with the filter is that it is 200 CFM when clean and goes down hill from there where if it is 500 CFM to start by the time it can only do 200 CFM it has packed in quite a bit of junk.

Where there is no filter, maintaining 200 CFM is a lot easier but less is a bad thing no matter what the cause, and I cannot imagine a problem with pumping the air a lot more.

The only requisite is that the exhaust CFM exceed that of the intake fans.

If you have trouble accommodating the fan size, I think with a short run like that you could loop it down to the fan below and back up to the window for example.

I have one of the lower CFM fans (the Vivosun) and either need to upgrade or shorten my run. I’m noticing more smoke in the chamber during cuts, and the lid and optics are getting dirty faster than normal. Subjective, but that’s my impression.

Kewl, it’s not just me then…
It’s sooo much quieter though, well worth the extra cleaning needed.
I’ve also be debating upping the fan on it. Just need to find a higher CFM 4" than the 195

Yeah, once you’ve cut with a quiet fan you never want to go back…

I think my 4-in fan is about a 195. In my case, the bed area seems to clear quicker, I would attribute that to not having the obstruction and the turbulence caused by that fan grill. Just a guess.

So I did a thing. Since we don’t have alot of space to stick an inline fan in there, he thought, why not use a fan. So we decided to try to put a fan between the exhaust port and hose.

The fan that fit in the photo is a 102CFM and it measured around 60 decibles @ 3 feet away. This was still strong enough to pull smoke but I noticed there is alot more smoke on my test cut so probably pulling less debris. So, yes, CFM does matter! If you are wondering why I have another random fan up there, that is to clear burnt flesh smell of leather out of my room. That one is around 100CFM I think.

If that’s a fail, we’ll let you know. 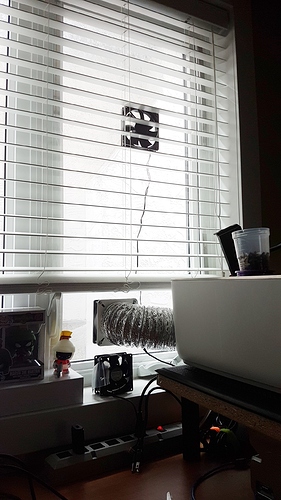 If you have trouble accommodating the fan size, I think with a short run like that you could loop it down to the fan below and back up to the window for example.

we thought of that but there isn’t alot of drop unless I cut a hole in the table. We never thought about that when we built the laser space that we would have to adjust to something like this. That was one option as I think the sound reduction would be worth it

I think the sound reduction would be worth it

I would guarantee it is! Now I can carry on a conversation at a normal level standing right next to it. Considering how pleasant the result is, in your place I would do whatever it took.

Quick Question for those Who have done this? did you have to remove the internal fan or just tell the GF that you had a external filter attached in the app? I have a inline 195cfm fan on the way and I want to make sure I have all the needed parts to do the job. I also sit very close to the window and mu Duct is a straight shot to the window with 14" of space.

did you have to remove the internal fan or just tell the GF that you had a external filter attached in the app? 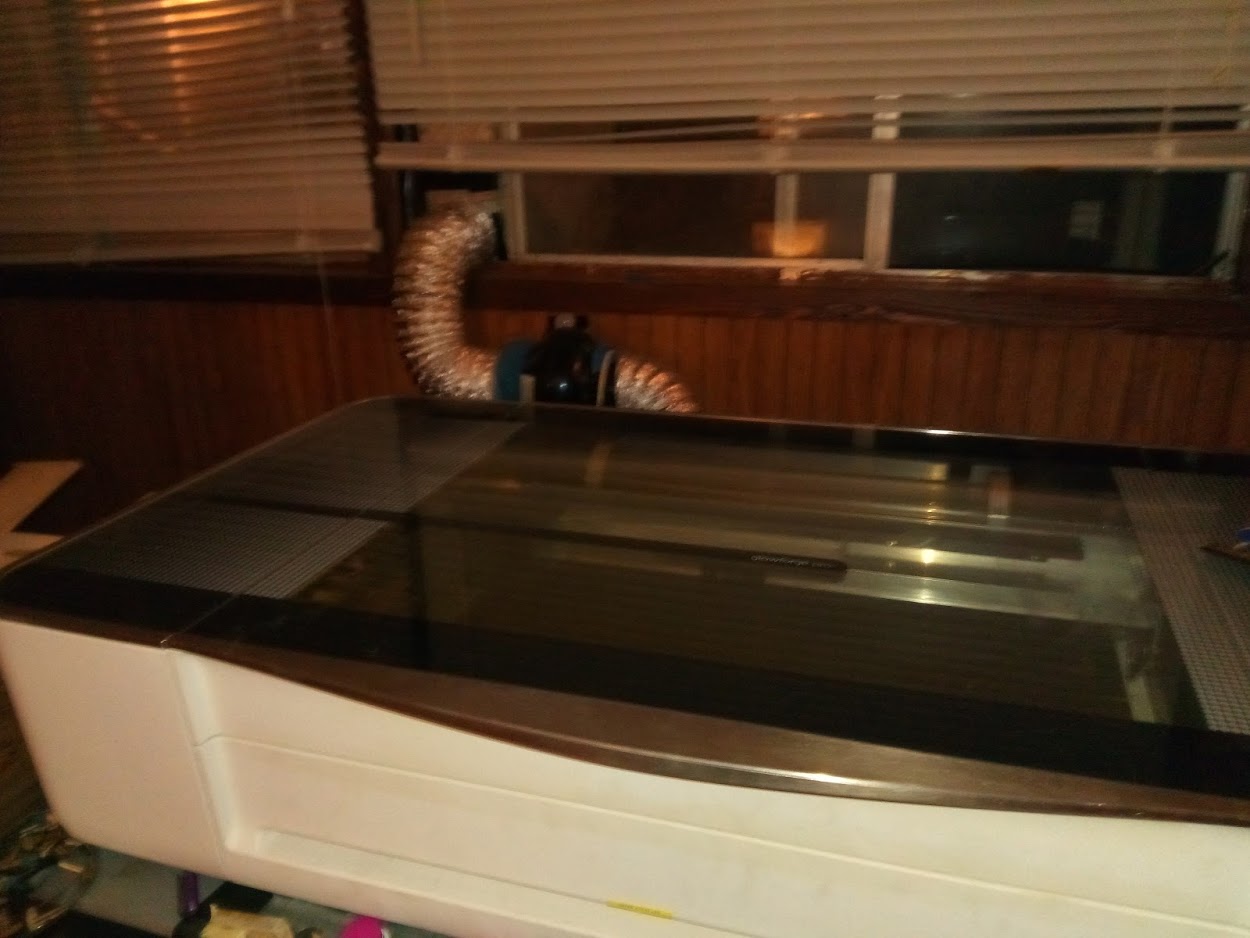 That is what I have set up and you absolutely do not want to get rid of the exhaust as for heavy smoke situations 195 CFM is not enough. running both however does much better than either alone, I don’t think it is possible to have too much air movement. the only reason for having the exhaust fan off is if the filter cannot handle the greater volume and starts leaking between them.

I have found the 195 CFM I have behind the machine to be fine, but since mine is out of warranty I have removed both the fan and the fan grill. Removing those obstructions may be the difference between @rbtdanforth’s experience and mine.

Yes, you can select the filter option to disable the fan. You could always just try it to judge its effectiveness.

One thing for sure, the noise reduction without the exhaust fan running makes it a different machine.

Thank You for the rapid responses…

I am so far from a Air Engineer that is is silly, if i put two 195 cfm fans inline in the hose I am sure I don’t get 390 cfm of air movement. does anyone know what it would be. I am doing this entirely for noise reduction. My neighbor who unfortunately is the Condo association Pres has asked why I vacuum so much. My vent is on the opposite side of the building from her so smell is not the issue it’s the supersonic jet engine sound my Pro Produces that is going to cause me issues.

Any and all sound reduction advice is welcome!!

I hate the idea that i may have to stop using my GF or go find a small shop to rent.

You’ll get no more than the rated speed of one fan, but it can help ensure you get close to that with long runs.

You might find using one fan, and then turning on “compact filter” mode in the UI is sufficient.

In an area with no resistance you might get the same value for one as for two but as there is even internal resistance there will be an increase. If you had a 500 CFM and a 190 in line the 190 might offer more resistance than help but that too would vary depending on the amount and location of the resistance.

shortly after obtaining my GF I added some pretty heavy duty 4" insulated tubing I purchased on Amazon. Although it did not make any difference on the noise level inside my home, the noise reduction outside of my home was tremendous.

This weekend I finally added on the 6" Vivoson inline fan so many have mentioned and toggled on the ‘compact filter’ switch in the software. Now my GF is also remarkably quieter inside my home too. My daughter homeschools and sits in the same room and I can finally run it at the same time as she schools.