I got my plastic yesterday. And after much digging and hemming and hawing… I see that no one has posted what settings they used to cut/engrave it successfully. So onward to the deeps, here be monsters.

I masked it, placed it ontop of a piece of draftboard, to catch any drips, cause everything said that it might melt. Set the camera focus to the height of the plastic sheet and the draftboard together, and used the proofgrade veneer settings, figuring that it would be a good starting point. Due to similar thicknesses.

Honestly It worked better than expected, but not quite as well as I wanted. Didn’t help that I used the wrong file so the whole thing was a wash even if it had all gone swimmingly. It did burn down almost to the 2nd layer in some spots, and the cut did go through anywhere the head had to change direction due to angles.

So multiple passes with the same settings is where I’m leaning… Unless someone is feeling generous enough to share what settings they used that did work.

ABS or acrylic? There have definitely been posts on the acrylic, this is the first I am hearing on ABS, if that’s what you meant.

Like so: Sometimes, life really is Black and white

Well would ya look at that. Yet another material I gotta try. mumble grumble

And maybe I’m dumb and should look at the page to find the starting settings.

Yeah I saw that but it’s not a direct analog to GF I don’t think.

Cutting ABS Beyond the Manual

I really want to experiment with cutting ABS plastic. I realize that ABS plastic is a challenging medium to work with, due to the low melting point, and tendency to distort when heated. Will the Glowforge expose a lot of fine control over the laser cutter to allow me to experiment with differing cutting techniques? (Movement speed, laser power, cut duration, etc) I realize that you are still probably don’t know the exact specs of the model of laser that will be included in the product, but in g…

Of course you can also do small tests almost as quickly as get answers here I think. You’re definitely a bit of a pioneer as far as posts go. I hope you post your results, I’d like to know how it turns out.

Definitely following this thread. I got some of that stuff and tried it out with lots of melty failure. I tried it with normal acrylic settings and it did not work at all.

like I said, I started with the veneer settings and those “worked.” But I kinda ran out of time to start over from scratch since I used the wrong file anyway. I might get a chance sometime in the next few weeks to try again. If no one else beats be to it I’ll post the settings that do work on this post with the results. Right now I’m still leaning towards multiple passes with the veneer settings.

I’m not certain I have enough left after my fail last night to do a test sheet and what I bought the plastic for in the first place. If I do have any left over I’ll be sure to do that though and post all my findings.

Its only really a problem if you don’t have proper venting. I’ve got mine pushed through a window, to a bathroom exhaust fan, that pulls everything through a car airfilter before shoving it out into the wild. But I still wore a mask while it was cutting.

Edit: But yes, some ABS plastics can release Cyanide gas when lasered. Since this is specifically laserable ABS plastic it shouldn’t be an issue, and a quick look over the sheet provided in the link doesn’t list it as a possible issue.

Edit the 2nd: Squirrel cage fan is the proper name of the fan I use. I’ve got it rigged on a switch inside so I can run it as long as I need to vent the GF.

From what I can tell from their product description is that this is similar to Engravers plastic like Rowmark which has been around for a long time, just “reinvented” with the flux of laser operaters needing supplies. The ABS is generally on the bottom layer with a laser-friendly acrylic thin top layer. I cut and etch this stuff all the time. Its great for signs and name tags.
I etch and cut unmasked since you can use a bit of rubbing alcohol for clean up if you wipe it off before it dries. I don’t like cutting through the plastic mask it comes with but leave it on for protection since this can scratch until you are ready to use it. I layer mine with tissue paper in between when storing.
You can find more of this stuff here.
www.johnsonplastics.com/catalogsearch/result/?q=Blacklites+plastic+laser

Price is for a full sheet. Qtr sheet (12" x 24") is just short of $23.
Make sure products you find on this site say laserable since the other kind is ABS on both layers for use in a rotary or cbc cutter and will be very melty.

Make sure products you find on this site say laserable since the other kind is ABS on both layers for use in a rotary or cbc cutter and will be very melty.

Oh, the three layer stuff…lol yeah probably for rotary cutters. Was that on that clearance stock? When I looked, most of it was for rotary… 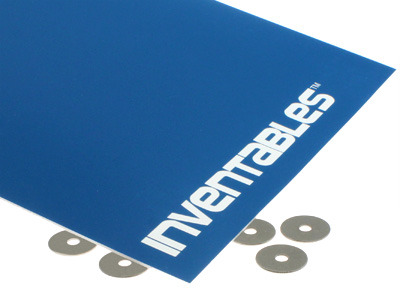 It says it’s good for laser, but I apparently haven’t found the right settings for it yet.

The stuff I got is just two layers, at least I didn’t think I saw a third when I looked at it lastnight. Can’t check right now because I’m unfortunately stuck in the salary mines at the moment.

@smcgathyfay any chance you could at least point us in the right direction for settings?

Idk, in my opinion, inventables has jumped on the bandwagon of “laserable” stock but I’ve heard LOTS of issues with inconsistency in their products. Hopefully it was near the beginning and they’ve ironed out the problems.

Johnson plastics has been around for along time and are very consistent. They now are the combination of several companies and have phased out duplicates and taken the best of each.

I cut on a Universal 30 wt so the settings won’t be the same. I’ll have a look, I know others have used this with their Glowforge.

This looks like standard acrylic…1/8" (or should be from their description) It’s so hard to tell from the website. I’ve never used this stuff, but I would think a standard deep acrylic engrave should work.