Is the greyscale engrave option gone for good or just a glitch?

Noticed I don’t have the greyscale option anymore to choose between varied and dots. Is this a forever thing? Just on my end? And for those of us doing the 3d engraves do they still work without the option?

If you don’t have those options most likely one or both of these things are true:

Some commands only appear with certain art types, so what is available will change.

Looks like the option is available on my past engraves, just not the new ones. Someone else also posted on a group page about the same thing. 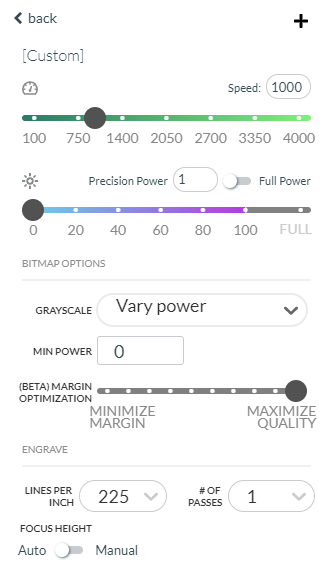 Weird, doesn’t show on mine.

This is a bitmap and the 3D preset is an option for some PG material. 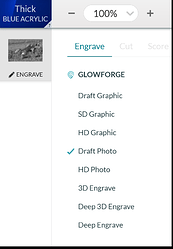 And a vector where it’s never been an option 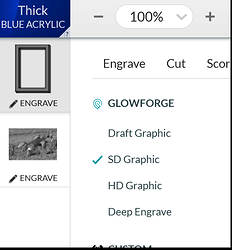 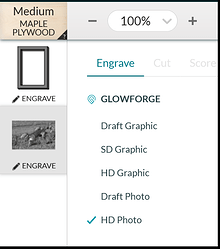 Then you are uploading a vector, which fires in a constant-on, single power state.

You can only select the dots/patterns/vary power options for bitmaps/raster graphics. If they don’t show, you have a vector graphic.

Interesting, This is an image designed for 3d engraving but they say not on even thick cherry plywood. In any case, I have used the 3D option and it has a very low LPI. I would create many saved options for myself instead of using any presets in engraved stuff.

The “3D Engrave” option isn’t shown for plywood because plywood doesn’t have a consistent density, so it’s not much use for that.

Right, as I said:

If you don’t have those options most likely one or both of these things are true:

Seems like a slam dunk unless @ssommerville can show that these two things aren’t true in their case.

because plywood doesn’t have a consistent density, so it’s not much use for that.

I use 3d engrave (vary power) all the time on BB ply, the trick to getting consistency is settingthe speed and power so it doesn’t hit the core. So, while you’re correct with PG settings, when doing manual I’d say that there’s a bit of wiggle room on that statement.

Thanks so much! This is probably what it is then.

When I was getting started lasering I engraved a dymaxion globe in BB, and used a lot of power, which engraved the top layer clean off. It was kinda interesting because it revealed knots and other aspects of the middle layer. Of course with MDF-core plywoods like PG it wouldn’t be quite that interesting, but it was a cool unintended side effect.