Is this thing even on?

I’ve never been too heavily concerned with the noise of the Glowforge, inside or outside. It’s about like a vacuum inside and I’m on 6 acres, so exterior noise isn’t much of an issue. However, an upcoming adventure may necessitate my paying attention to how much noise I’m making.

I picked up a 4” muffler/duct silencer to see what would happen.

It’s not without some problems that have to be fixed. As it is designed, 1. it’s just a slipfit onto the Glowforge flange and stays pretty loose, 2. The body is fat enough that it sits a bit too high to go straight on the flange, 3. You can’t clamp it because, well, the case doesn’t bend so well. After I raised the Glowforge a little bit with some 1/2” wood on the runners, I 3d printed an adapter that @marmak3261 had designed (I believe) but it didn’t fit very well for me. Need to scale it up a hair to fit the GF flange.

I ran some initial tests with the stock ducting vs the muffler and vowed to address the fit issues a little later. I just wanted to see if it worked.

Then, I realized I was overthinking it. It doesn’t have to connect to the flange. Just cut my dryer duct and connect that to the flange and then the muffler, and then attach the rest of the dryer vent to the backside of the muffler to vent outside.

I also cut a simple little base to hold the muffler. Since it’s round… and it’s under pressure, it has a tendency to want to roll.

Cut ducting and base 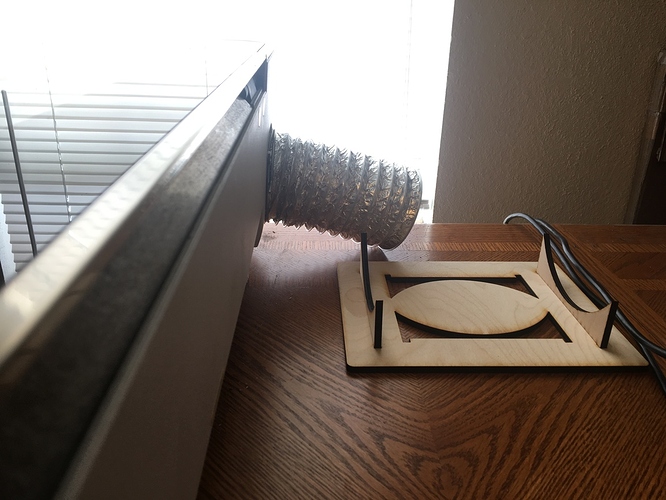 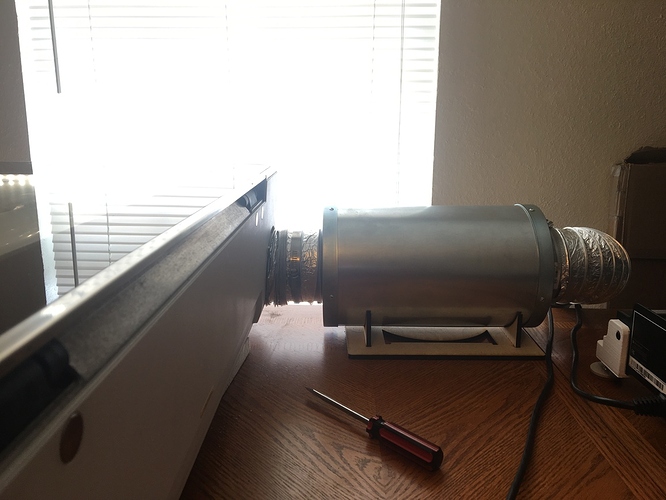 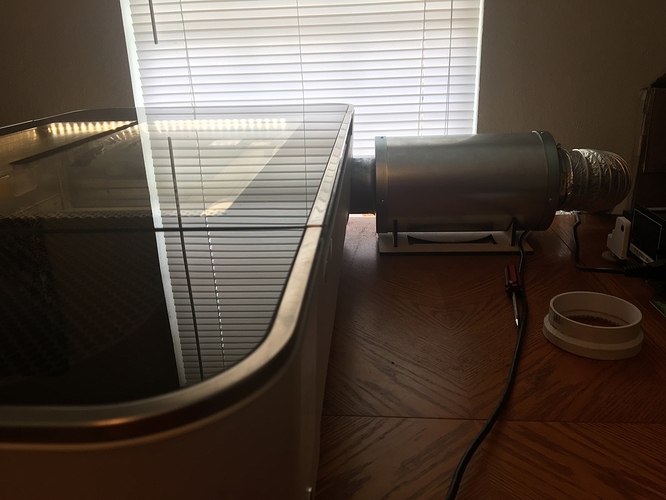 I thought a couple of inches of dryer duct before the muffler wouldn’t make a big difference. It does. The muffler still works but a lot of noise escapes out of just those couple of inches. So, I readjusted things to have the muffler as close as possible to the exhaust flange. Much better.

Initial testing looked like this. I had the phone approximately 3 ft from the exhaust flange, at the backside of the machine by the power button.

I ran some other tests the next day, and my overall decibel readings were higher (saw a max of 81dB with stock exhaust) but the change was the same (hence not worrying about the actual decibels but just the relative difference between muffler and no-muffler).

A 7-8 decibel improvement. It feels almost half as loud…

Poking around today, I see that the exhaust is basically making no noise. The rest of the noise is from the stepper motors and the intake fans. I see the intake fans are rated at 210cfm and 64 decibels.

I know a while back @takitus built a cradle type system to go under his unit. I probably don’t want to do that but will investigate additional ideas to quiet down the intake side, if it can be done without restricting air flow (the muffler doesn’t impede exhaust flow - it’s filled with neoprene to absorb the sound waves). Like I said, I never thought the Glowforge was terribly loud. And it’s certainly not now… but why not see if I can make it even quieter, I guess.

My unit is set up in a permanent place - and positioned to use the passthrough, so I have room behind the unit to put the muffler. It’s 12” long… so depending on your set up, it might not fit.

ah very cool. so does the original dryer tube run through the muffler, or do you just connect tubing to either side of the muffler and the air flows right over the foam inside?

The duct is cut and then attached to the inlet and outlet with clamps - so 3 clamps total - the gf flange, muffler inlet, and muffler outlet.

Pretty easy/cheap solution for the dB improvement that shouldn’t have any impact on the system itself.

Ive wrapped eggcrate foam around the outside of my tube and noticed a significant reduction in noise. Im sure the outer metal sheath helps in reflecting the stray high pitched waves back into the foam for more reduction. It probably wouldnt be too difficult to buy a small section of 6 inch tube and throw the foam in there and print up some end pieces on the gf, or just use an adapter. gonna see how difficult this would be.

Thanks for the inspiration!

I think a person could definitely fab up their own. Some pick and pluck foam, a GF cut rectangular box (glued up or be airtight) and you’d be good to go.

I will say this, every bit of hose ducting between the exhaust flange and the muffler makes a difference. I was moving the muffler around and able to hear the difference.

I’m not sure what could be done on the intake side with the limited height and not restricting air flow, aside from a cradle like you built. I’m researching and thinking it through.

I changed out my exhaust to this:
https://amzn.to/2KI0aYl

Note: that new one has a plastic lining and I wanted the foil one, so I just attached the old foil one that came with the GF to the plastic one inside the insulated tube and pulled it through. Worked great and I did notice a sound reduction. Sorry, I did not take a dB measure