Tried my first experiment today with Thick Draftboard…a scored pattern, and then a cut for a finger-joint box. The score was beautiful, but the cut was…not great. There was an issue with not cutting all the way through, but (oddly) only when the head was located “up” in the Y dimension, away from the access door and towards the back of the machine. The lower sections of the box cut through with no issue, but the upper ones (near the top edge of the Proofgrade) didn’t cut through at all.

Pics attached, all are oriented with the “up” being the edge that was near the back. Front and back of cuts shown, you can clearly see where the cuts “faded” in power and didn’t go all the way through. 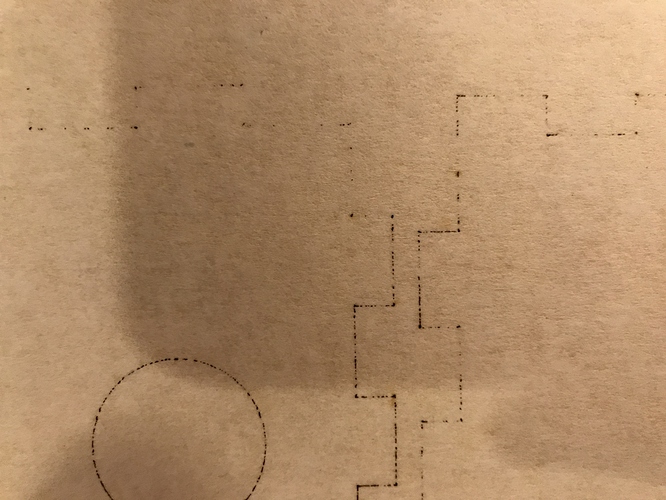 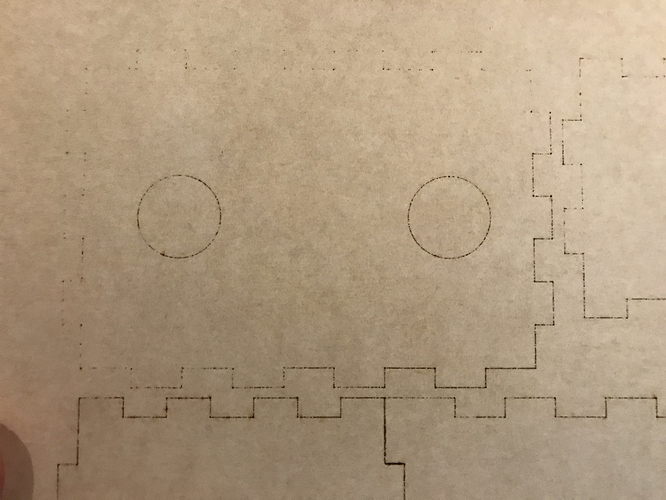 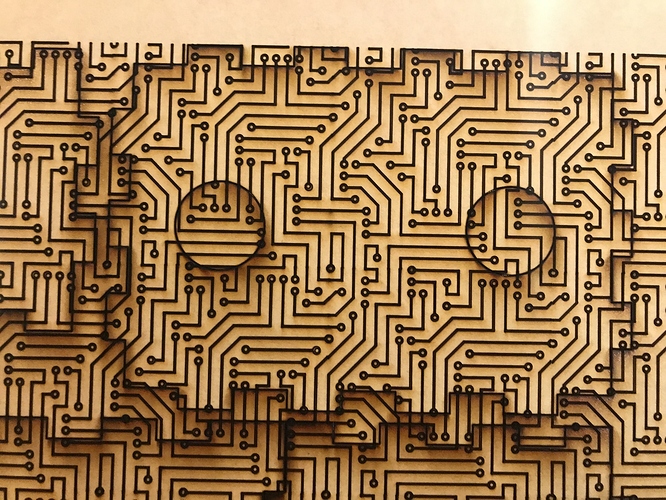 I am wondering if all that engrave (beautiful btw) maybe kicked up so much soot your lenses got dirty ?

where the cuts “faded”

That sounds remarkably like the issue @henryhbk talked about yesterday.

Obviously I can’t know but it looks like the classic material not held down flat. The slightest change in height, usually due to warp, will cause that.

Yeah, but this was brand new Heavy Proofgrade Draftboard. Supposed to be guaranteed, right? :-/

Not guaranteed not to warp.

Have received some straight from the package with slight warp.

That’ll be a nice looking box.

Was the draftboard perfectly flat? With some material warpage is the problem. Until they have continuous autofocus implemented keeping it flat seems to be an exercise for the user.

If that were the case, I’d think the cut would be uneven everywhere/not cut cleanly everywhere. This is something else, since the “near” cuts were through, but the “far” cuts weren’t, related to the Y axis.

If the material lifted in the back it would cause what you are seeing. Again only you would know.

The lower sections on that look shadowed, which likely means the wood was a little warped. If those sections of the cut fell down, the slight warp was probably what caused the uneven cutting.

In the future, to avoid wasting material, use a pick or a piece of tape to lift a cut section to see if it comes up, without moving the backing material at all.

If you have material that is visibly a little warped, you can slow down the default cutting speeds by about 10-15 points and generally get through the material in one pass.

I live in a very humid environment, and everything warps here to a certain degree. Those tricks are what I use.

or the material heated up and changed thickness

Edit: (half sarcastic because not sure if thats even possible)

The “pick to see if the pieces move” bit is a lot harder with the “thick” proof grade. Even the bits that were cleanly cut didn’t move freely until I put a bit of force to them, just because of the amount of material friction holding them in. But on those upper sections, it clearly didn’t go all the way through at all…

I use one of these - and it is a lifesaver. (Best five dollar investment I’ve made.) 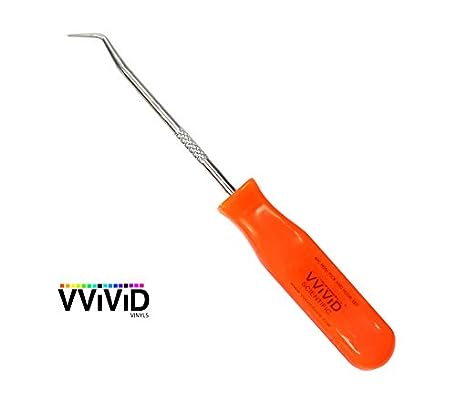 All crafting projects need tools, and when it comes to tools, it's best to have the most versatile tools at your disposal. The VViViD 4-piece weeding tool set gives you everything you need for a varie ...

Just some things I have noticed on mine when it is doing a lot of engraving/scoring the heat can make material that was flat start to ‘flex’ a bit. Leather especially.
I have taken to using magnets all the time to cover whatever I can whenever possible.

Yeah, I get that for leather and paper and maybe even some thinner cardstock/cardboard. But this was Thick Draftboard. 1/8 inch thick. I don’t think I wanna try to flatten that with magnets.

I find it’s more often than not critical to use magnets on even the 1/8" proofgrade material. I use rare earth magnets about the size of a quarter all around when needed.

Most of my ply proofgrade and non proofgrade has a slight warp even though always stored flat.

I keep having major issues with cutting, mostly on the thicker draftboard. I use the hold down pins and even some tape if it looks warped. Generally most of the pieces arrive with slight warp and I ALWAYS weight the stack down with a very heave piece of granite. Still, after that, I cannot seem to get a PG cut to go through any of the draftboard!! Frustrating since I try to use that for “samples” to show clients. I’ve resorted to cutting up nice, heavy Amazon boxes to use for samples because I cannot rely on the PG Draftboard and I cannot afford to keep buying them. :-’(

You’ll want to open your own case about that rather than trying to revive a year-old one. They very likely won’t even see this otherwise.

materials are guaranteed. You shouldn’t be wasting any $ on it. If something fails due to a failure of the machine or the material, let them know and they should be able to fix you up and credit you for the failed material.