My illustrator recently updated and I’ve been having issues with the cuts/vectors being weirdly imported to glowforge and the cuts being done twice.

For example, I’ve attached the AI file for a test circle cutout:

When importing to glowforge app it defaults the lines for the circles and outer box as engrave:

When it used to default the shape/outlines as cuts?!

Then, during the cut, it is cutting the outline twice:

Using these export settings for the svg: 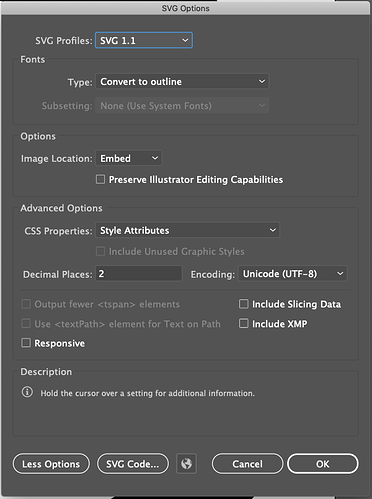 Any ideas how to fix the issues with the svg? Is there some new export option that I am missing that is causing things to go awol?

Did a little more testing… tried to do just a simple circle with a 10pt stroke and a white fill:

Before the stroke size didn’t do anything and just did the outline for the stroke (ex: cut the circle out) but now it seems like it is cutting both the inside and outside of the stroke?! And then it is trying to engrave the white background which it didn’t do before.

Switched to cut for the stroke: 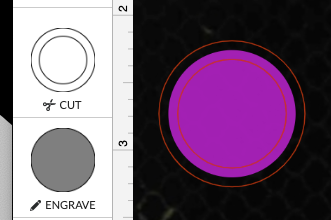 Are your circles using a regular stroke, or did you make the stroke inside/outside? If you make it inside/outside it will turn it into two cut paths, because you have Convert to Path going on. Try double-checking that the stroke on your shapes are regular.

Thanks for the help. I’ve never had issues with my strokes before. I guess the default stroke was somehow changed when I upgraded to the newest Illustrator so the strokes were defaulting to inside.

Yep. That’s what caused it. They get expanded if they are anything other than center stroke.

Well I hope it works now! I discovered this a few months ago when I did an inner stroke on a notebook and it drove me nuts. So I zoomed way far in on the SVG and it had double lined! Flipping annoying haha. Have a good day C:

One thing to add… Not related to the actual problem you were having… Just Save As svg. Don’t bother with export.

That dialog box is the Save As, not export. Just word choice. I prefer export either way, even though it’s not the recommended way.

Are your circles using a regular stroke, or did you make the stroke inside/outside? If you make it inside/outside it will turn it into two cut paths, because you have Convert to Path going on. Try double-checking that the stroke on your shapes are regular.

Do you mind explaining this to me on a 101 level? I’m not having a problems but reading this, I want to make sure I somehow don’t accidentally change my settings. Although I’ve become quite comfortable designing in AI, I still don’t know many features. I did look in AI but couldn’t find it. Where would you make these changes, regular stroke vs inside/outside? 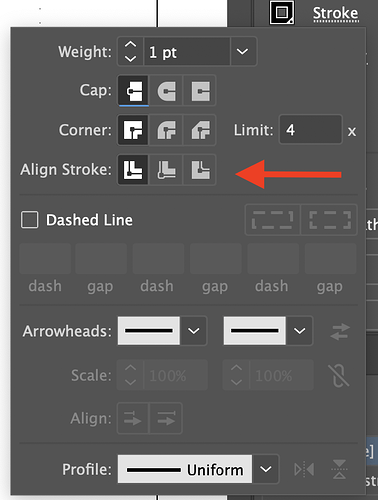 Thanks so much. Honestly, I had never seen that box. But I was able to find it since you posted the picture.

Now to experiment with those other options one day to learn them; cap, corner, etc.

@chris1 @Pearl glad Chris could help you out! I’m not at my laptop right now so it would have been hard to explain.

Now to experiment with those other options one day to learn them; cap, corner, etc.

They’re good for drawing pictures, but not for laser cutting. Many of them map to things that aren’t / won’t / can’t be used by the Glowforge software, and that can be confusing. They’re a lot better about giving you warnings now if you do that (for example, trying to use a dashed line) but not always.

Most of those things are just appearances, they won’t actually change or impact the path (except stroke inside/outside/center because of SVG limitations).

You can see what the path is actually doing/looks like by using Command-Y on Mac (outline mode).

Looking at the options I assumed they would not change laser cutting, but I could also see where it would be nice just to make some cleaner designs.

Sticking to operations that focus on paths, not strokes, is all you need to worry about for designing (cuts and scores) for the GF.

Those functions you mention will have no effect on how the laser works. They won’t make “cleaner designs”…

The inside/outside stroke options are very handy for iterating offsets and layered designs made of multiple offsets. Especially since you can stack several in the appearance palette.
Also good for working on lattice type things like Frank Lloyd Wright style designs.

I see you’ve gotten some great advice and guidance from the community - thanks, everyone! Did these suggestions help you get your print set up the way you want it?

If you’re still having trouble with this, please start a new thread or email us at support@glowforge.com.