For those that are interested… An update on my progress:

I spent a little over a month developing the customized bootloader, kernel, and Linux image for my board, as well as bringing up and testing all of the on-board hardware.

Yesterday, I finally took the plunge and connected it to my Glowforge (removing any remaining doubt about the status of what remained, if any, of my warranty

After initial checkout, I’m happy to report it communicates with all of the Glowforge’s native systems (except the cameras, those are more complex from a hardware and driver standpoint and I’m not tackling that part until a little later in the process - though my hardware does have full support).

I currently have some basic control over the machine, and a lot of work still ahead of me… 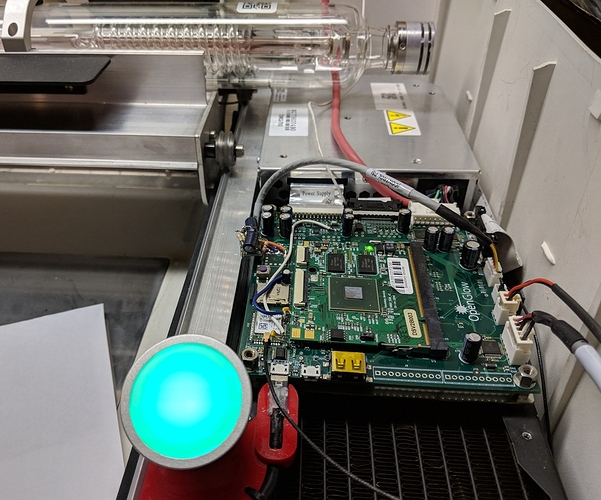 Source code can be found here. In addition to the Open Source code I am making use of, I’m also releasing all of my original work under the GPL. When I have a final version of the hardware complete, I’ll release that under a Creative Commons license.

I’ll also be firing up a forum where I’ll post regular updates on my progress and provide an open place for technical discussions related to the Glowforge (free from restrictive TOS and not hidden from the world like BTM). I’ll post a link to that as soon as it is ready.

i stand in awe!

This is fantastic work and fantastic news! I can’t wait to read what you have planned and going for! I was also hoping for a third party forum with material stickies etc instead of this info dump.

thanks and keep up your spirit!

A little light on content, but then again, it just launched a few minutes ago, so…

Also my grandparents (in rural south/central Texas) went to a tiny country church in my childhood, and “Brother Wiederhold” was its pastor. He had a hare lip and it took a while to learn to understand him.

After >50 years I only have brief flashes of memory from those days (I was like 4-5 years old), but I can still picture him clearly. I’m thinking it can’t be THAT common a surname, can it?

I signed up. Hope more will follow. As soon as I have anything to post I’ll be there.

Thank you for sharing your work.

Woa - dude this is awesome. Please, keep it up!

Congratulations! You’ve accomplished a lot in a little time

This is great, looking forward to see what is possible!

Well I don’t understand any of what you’re doing or even what I’m looking at, except the few very recognizable bits. But I think that’s your glowforge button and I think that it’s teal, which is really the best of the glowforge button colors. Are you able to change the colors to whatever you want now?

I’m thinking it can’t be THAT common a surname, can it?

Not very, no. Though, there are a surprising number of Scott Wiederhold’s floating around…

That is the button, and it’s my best approximation of the official “Glowforge Teal”, as it is running 100% non-Glowforge provided firmware. (I do have full control over the button color and lid light brightness)

I refused the last 5 years to upgrade my 3D printer code, just because it is working fine for me and I see no need to fix something that isn’t broken.
But what you are doing is giving us that option, should we sense a want or need in that direction.

Therefore, just curious if you can persuade @dan and his dobby droogs (ref: Clockwork Orange) to work with you on this, since it is a large step toward one of their goals of making this available anyway (sooner or later).

That would be awesome sauce and make both of your jobs easier in the long run.
I can understand the company not wanting their methods blowing in the wind, but that dog has already run away. Besides, all the competitors need to do is buy one and tear it apart to get to the same place.

Legal is probably already squeezing their butt cheeks, because that is what they are paid to do.
The rest of us just want to have options (even if it is a path we decide not to trod).

Pretty awesome that you are doing this!

Do you have plans to “upgrade” some of the stepper/motor drivers for more micro steps and thus more movement precision?

Do you have plans to “upgrade” some of the stepper/motor drivers for more micro steps and thus more movement precision?

The prototype board in the picture is using Trinamic TMC2130 step drivers. A giant leap beyond the drivers on the factory board.

Therefore, just curious if you can persuade @dan and his dobby droogs (ref: Clockwork Orange) to work with you on this, since it is a large step toward one of their goals of making this available anyway (sooner or later).

No persuasion needed; we’re behind on our part of the deal - we are working to catch up. Unfortunately over the last few months we had to decide between doing what we think is right for people who care about open source (releasing source code) and doing what we think is right for all of our customers (keeping production unblocked). Sadly we found some surprises in the former that made it more complicated than we thought, and we couldn’t have done it without sacrificing the latter.

I don’t feel great about that and don’t fault folks for being angry or disappointed that we haven’t done both.

Check your spam box. They seem to like to get caught in there.

If you still don’t see it, let me know.

I’m not getting the email address activation email. Tried twice. Nothing in spam.