Just a small ripple in an otherwise placid sea

Hard drive failed, taking most everything with it.
A file I had been working (learning) on for a week, pushing against the walls of my ignorance - poof. Hadn’t had the need for a backup in many years (this from a guy who spends an inordinate amount of time backing up (as in two steps back).
But, I do have the ground I’ve gained, many thanks to @mpipes, @marmak3261 and the tutorials @Jules put together for us. This community is amazing.

So, got the machine back up with a new SSD last night and to day started playing around with 3D enraving.
These examples are all in default dark (100/335/340) for cherry hardwood. (it’s actually a 1/2" piece of Ash)
The diamond knurl from @mpipes in Free laser Designs rocks. The others were snagged from a search for ‘Depth map’ on Google images.
Where you see a line through some of the samples is the difference between 1 pass and 2.
Edit; for scale, the Celtic knot is 1 3/4 on a side. 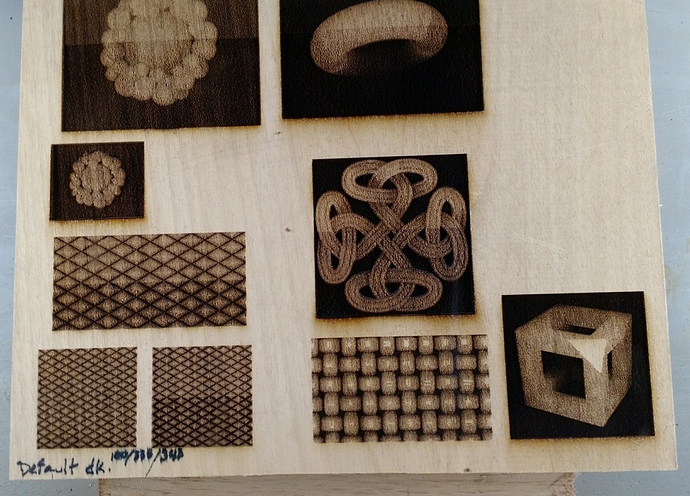 You can’t tell from the image, but the relief is great!
Being able to draw and sculpt with energy, that was science fiction within my lifetime.

for offering a price that allowed me to indulge. I notice as the machine beckons, the pain of the delays is a distant memory.

Oh man, sorry about your HD. That kind of thing hurts!

Yeah, good wake-up call for me.
BTW, I notice since the update that processing by the cloud is faster, that is welcome also!

I’ve been feeling kind of poorly, so haven’t even had the energy to do any testing on it since the announcement Tuesday night…Monday night? Whenever it was…

Once I get back up and running, it will be dull stuff like redetermining settings. But I’m still excited in a quiet kind of way…

Hope you feel your old self soon.
You were concerned about the changes and the tutorials, the mechanics are all there - doesn’t seem like anything worth taking them down for.

A software I’ve used to recover data on a bluescreened HDD is _minitool power data recovery
_ I believe they have a free version. It worked extremely well and recovered most of my files.

Couldn’t get it to spin up, even tried tapping it which I had been lucky with before many years ago.
Thanks for the input!

You really blew it up!!

I’ve got the impacted workflows and demos down temporarily until I can update the screenshots. Most of the actual mechanics of it all don’t change, but someone is bound to complain if it’s not the same as the current setup.

I’ll put them back up later.

Try putting the drive in the freezer for a while, then hooking it up. Certain drives in years past which failed to spin up could be revived that way. You might get lucky!

I’ve been unable to find anything for Windows which works as well as Time Machine on my Mac. The “File History” built into Windows doesn’t even seem to do a good job of backing up My Documents, so I do that manually.

So cool! Just today I did my first 3D engrave (not yet ready for prime time). Yours came out looking so clean. I’m struggling with cleaning off the char, so any tips you or anyone else has would be much appreciated. (A “cleanup” pass of 20/335/340/1 didn’t do much of anything on cherry hardwood).

this is regrettable. sorry, dude. now is a good opportunity to sign up for a cloud backup service, though.

Computer woes…just rotten. Glad you’re up and running again. My life is too full right now, but I am looking forward to starting some new tests with the new super powers.

After the work you put in on those - slap 'em.
I hadn’t thought of that, but naturally it would happen.

An alcohol wash with a toothbrush (use his) is what I use so far. Break cleaner in a spray can cuts it faster, but the stench will drive you out of the space you use it in.

Thanks for the tip!

Our Time Machine has saved our butts twice… or at least saved our family’s photos.

It’s a terrible feeling, thinking that you’ve lost ‘everything’.

In the same boat

I’ve just discovered the one of my two external hdd’s has gone bad, the smaller one, 256Gb.
LED lights up but no sound of the disc moving, and neither of my os recognise it (Ubuntu nor windoze).
Will try the freezer idea, but what is annoying is that I’ve no idea what’s on it.
Fortunately, I think it’s mainly a back up of my pcs, both here and in UK, but no real idea.
My other one, 512Gb, carries my working files as a back up, but mainly downloaded entertainment from UK, so that would be less of a loss.
Checked out the minitool site, but with only 1Gb free, unless I can grab a contents file, I’m stuffed with that one !

Oh no! Not another one!

I have been in the position to be holding the HDD in my hands while powering it up and rapping it laterally against my hand, I heard it spin up. Oh yeah baby! Gimme ma stuff - now!