Just a few short months back, about 6 or so, I had issues with my ribbon cable, it had a kink and was chafing while traveling back and forth. I contacted support, they saw the pic, and knowing my qualifications for repair, they sent me a new cable. “Tripp” was still working, but the chafe was now down to metal on 3 wires. I was just 1 month short of my warranty expiring. I am a founder with a pro, so my extended warranty came in handy.
I now had to decide whether or not to replace the cable at that time or wait until the end of warranty.
I waited, sure enough, Tripp decided to just stop working about 2 weeks after warranty end.
I made the repairs, successfully, I will eventually post the procedure in “beyond the Manual”.
The reason for THIS post is about what I found whilst repairing. As you can see in the pics, this is what happens when woods that are abundant in resin, sap or glue, make your outlet “impassable” over time.
The pictures you see are of the SECOND time I was forced to clean the outlet since my ribbon cable replacement.
I have my glowforge set up in my garage with a vivosun 4" inline fan venting out. When working correctly, there is absolutely no leaks of smoke and the interior of the glowforge stays in negative pressure.
I knew there was something wrong when I found myself using blue masking tape to seal all of the seams, and using my other vivosun inline fan that I use to evacuate smoke or fumes. I could not cut anything without smell.
After cleaning, it vents like new.
This should be amongst the cleaning chores scheduled for your machine, especially if you cut plenty of wood. Maybe not as often as your basic cleaning, but at least every 40hrs or so of use. 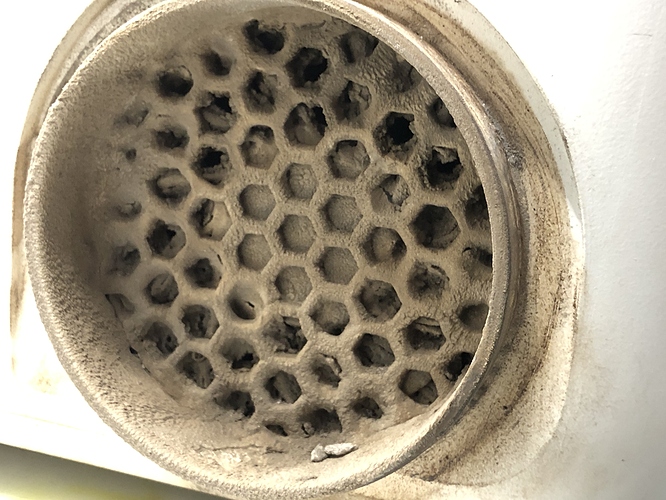 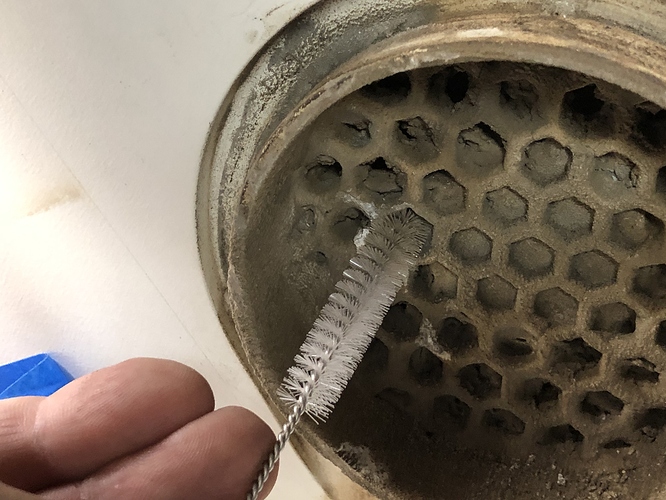 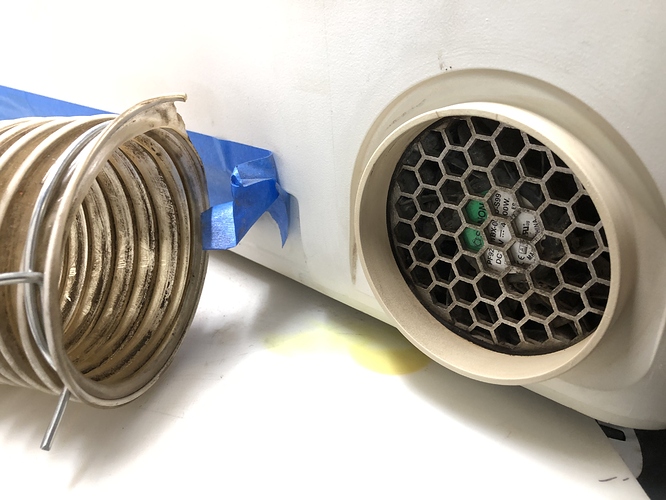 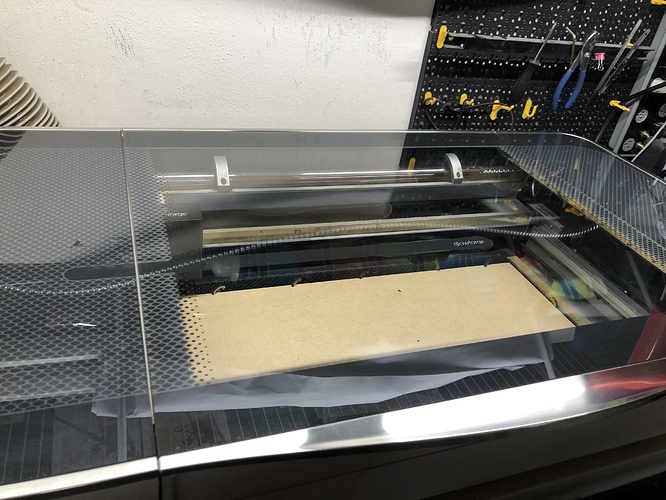 Very good example! That is a regularly suggested maintenance step that a lot of people overlook. 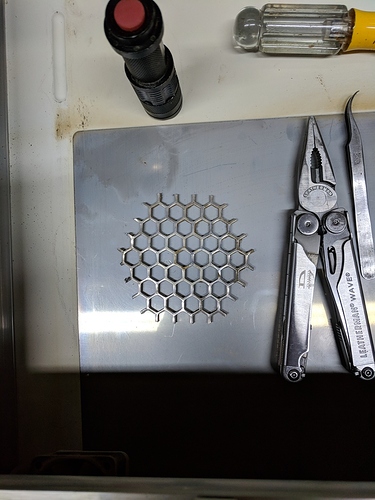 Rather redundant, the fan grill - considering you would have to yank the vent hose off of the machine and stick your fingers in the “unguarded” fan of the running machine for it to be a hazard.

The grill effectively restricts the airflow and creates turbulence in the exhaust.
Its existence is a reflection of having to judge the liability of a manufacturer’s product in the hands of incompetence.

Just curious - are cleaning the fan less often with the removal of the grill. With less obstruction ,perhaps more stuff can pass through? Do you get “better” smoke clearance? Less leakage?

The “KISS” method, always seems to elude me. I am not worthy, oh wise one!

What did you use to remove it? Access is a bit limited for a dremel.

I used some sturdy side cutters… 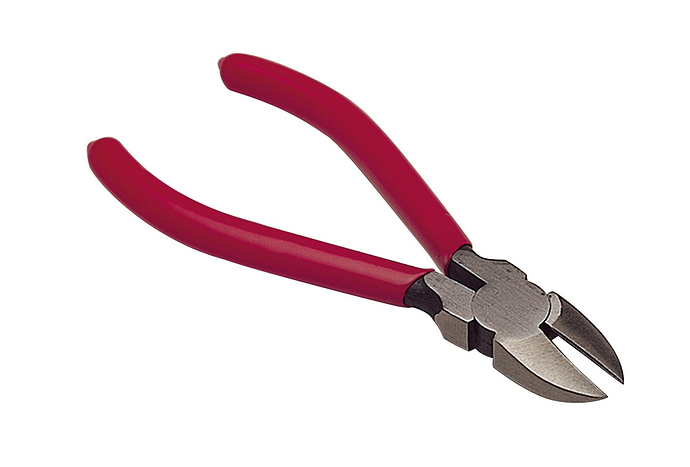 @MakerMatthew, yes, without the obstruction there is a bit less deposit on the fan. Better airflow, less turbulence and better clearing… not to mention easier access to clean the fan, and no grill to face load - or clean.

If I were wise I wouldn’t have all these scars!
Your post about keeping that clean is spot on, and was the first thing I identified as a regular maintenance issue, that at the time hadn’t been mentioned anywhere in the manual.

@sqw, as per my linked post, I removed the fan because of a hard vibration that made me think the fan bearing was bad, because it was fine one day but the next day when I turned it on it had the violent vibration. As it turned out it was just the build up on the fan, but how that happened overnight is a mystery to me.
Since the fan was out of the way it was easy to cut it out with a jigsaw. Otherwise I probably would have done it with a burr in my Foredom handpiece.

Since I had the left top off it was a snap to vacuum out the swarf. With the fan in place I would position the shop vac hose against the fan on the inside.

@eflyguy, I started with a pair, but I was reluctant to apply enough force for fear of breaking the jaw of the cutter.

I should add - I no longer have an internal fan, which results in a HUGE increase in airflow out of the machine. I have a 4" inline duct fan, which I’ve had since I owned the machine. After the internal fan died, I was pleased to find that I had no smell or smoke without it.

I was reluctant to apply enough force for fear of breaking the jaw of the cutter.

I had no such fear… lol…

Which directly increases the cooling airflow across the heat exchanger at the intake.

I just removed my exhaust grate (aka blocker). A tin snips made quick work of it. Less than a minute and it was out.

I still feel like whoever designed that whole exhaust area as being so inaccessible should be fired if they still work for GF. Although I’m guessing lawyers had a bit to do with forcing that design…probably the same guy that makes frozen pizza companies put the “heat pizza before eating” disclaimer on their package.

We also had another that was used a lot when referencing tolerance.
HTM -> Hammer To Fit.

My personal favorite is all the percussion maintenance I always seem to end up doing to keep machines running. I’ll have to remember the Hammer to Fit

The fan could easily have been mounted “externally” with an integrated grill with far less restriction. As you state, however, lawyers probably had a lot to do with the existing “protections” BUT they still could have made it more accessible for cleaning or replacement (Pro users specifically).

Most computer fans are attached via screws from the outside. Even if they kept the fan mounted behind the grill, they could have at least made getting to the screws to take it out significantly easier…

Ironic thing is that the more difficult something is to do the less likely people are to do it. Which is exactly what you don’t want to be the case with something that is responsible for drawing fumes out of an unsealed box in your house.