Unemployed since soon, It s a good time for me to prepare future Glowforge projects ready to cut when the machine will arrives.

And so I have a question. if you cut the same image in 2 different types of wood for example, is this possible to mix those two cut-board to have two 2-coloured projects like kind of marquetry? With a CNC, it is not possible because of the diameter of the drill bit but with the laser, is it matching perfectly without hole? Is the cutting width negligible?

Is this what you’re looking for?

“I think I have never seen a 'forge as lovely as a tree…” Okay, maybe that’s not how the poem goes. Been a long time since I sat in Mr Klinger’s American Lit class. My daughter is wrapping up her first year at Elon University in Elon NC. A prominent feature of the campus and integral part of the school’s culture is the oak tree. Every student is given an acorn upon entry and an oak seedling when they graduate. Lot of symbology and history surrounding the trees in town and around campus. She’s…

Proofgrade veneer compass rose inlay: from design to finished piece Made on a Glowforge

This topic will be a work in progress. I did the design in Inkscape and did a test cut of cat food box chipboard. This is definitely a parametric modeling job in the long run to get exact dimensions of the darts, but Inkscape cloning did pretty well Hardest part is assembly. I ended up putting some spray adhesive on to keep the pieces from shifting from my fat and sticky fingers. A needle or some type of pick would work well to shift the pieces, I used a pen. ProofGrade Veneer comes with an adh…

Perfect Fit Inlay Made on a Glowforge

There have been a bunch of great posts on Inlays using the Glowforge laser cutter. Wanted to try an instrument head stock inlay that I have attempted before, but found impossible (for me) to do by hand. Have a buddy that works at a veneer company so I have access to a lot of different veneer scraps. Unfortunately, don’t know what was used here. Looks a little like Padauk. [image] My stock veneers are extremely thin, 0.02" or about half of the Beta Glowforge veneers with masking. Fra…

Start with a search for ‘marquetry’ and then ‘inlay’ and then whatever you need to narrow your searches.

Yes, possible. The kerfs are very fine. PRU have shown plenty of inlays and mix-and-match puzzles.

I’m finishing one up now that actually was a very tight fit, and I had to press it in with a bone folder, with no kerf adjustment of any kind.

Not sure why though. Usually there’s a line about the width of a hair.

Could it be from a different material? One would expect different stuff to behave differently for the purpose of kerfs.

So it sounds as if you don’t need compensation for most/many purposes, but you probably will if you’re trying to do really fine work. (My parents had this one cabinet that was inlaid with a musical scene – a lute, music paper with notes… joints between different kinds of wood essentially invisible. That kind of thing would probably require kerf compensation

Yes – I’ve done a few multi-part projects twice, once in maple, then again in walnut, and swapped some of the pieces, I end up with “mirrored” versions, which is fine for my purpose.

I haven’t delved into kerf compensation yet, but I can confirm what @Jules said about a hairline gap between most pieces. For the moment, this is “good enough” – I’ll aim for tighter joins later down the road (when the software/power/speed are at their announced final releases).

I think once each person has had a chance to see it and play with it a little, they will be able to make up their own minds about whether they want to kerf adjust or not.

Honestly? I played with it some in the beginning, just for kicks, and it’s a lot of extra work for very little gain, IMO. It might make a slight difference in appearance on acrylics, but careful placement of the focal point makes the kerf so blasted small, it’s just not worth messing with it for about 99% of what I’m doing.

Anyway, as soon as the varnish dries, I’ll show another one that I did not kerf-adjust for.

Usually there’s a line about the width of a hair.

I have very very fine hair, is it like that? Or is it along the lines of thick hair? LOL!!

It might make a slight difference in appearance on acrylics, but careful placement of the focal point makes the kerf so blasted small, it’s just not worth messing with it for about 99% of what I’m doing. Hair is a protein filament that grows from follicles found in the dermis. Hair is one of the defining characteristics of mammals. The human body, apart from areas of glabrous skin, is covered in follicles which produce thick terminal and fine vellus hair. Most common interest in hair is focused on hair growth, hair types and hair care, but hair is also an important biomaterial primarily composed of protein, notably alpha-keratin. Attitudes towards different hair, such as hairstyles and hair remov...

Although it’s not clear from the article if they are limiting themselves to hair from the top of the head for this comparison.

Or, in the early days when I was testing - my average kerf measured 0.007 inches, less than the 0.01 inches @dan was claiming for it.

And it’s a lot less than that now, so maybe they’re working on an adjustment in their rendering software that they haven’t told us about. (We don’t get told nuttin…)

Kerf is small but NOT negligible if you are doing very fine work. Here is an example of inlaying letters in a .89" square letter tile. The number for the point is pretty small. To get the kerf offset for the cuttout of the veneer to fit exactly in engrave relief of the letter, I made the stroke .003" and then converted that to paths, broke it up, and then had an inner and outer path, one to fill only for an engrave, and one to cut only for the inlay.The red outler line that is the cut vector is .001" wide. There is a slight gap between the green fill and the red line. That’s the compensation. The letters just go in but need rolling for setting them. It’s tight, but then there are no gaps. 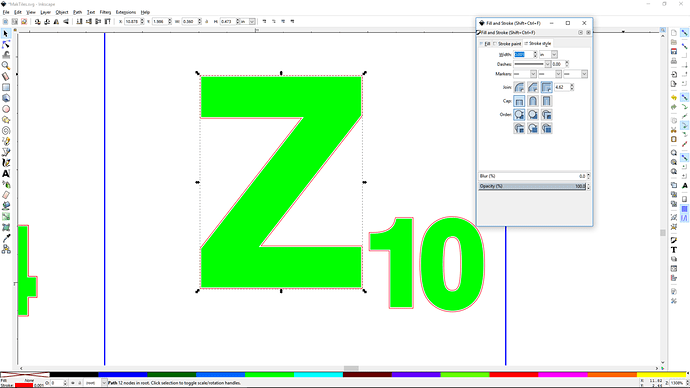 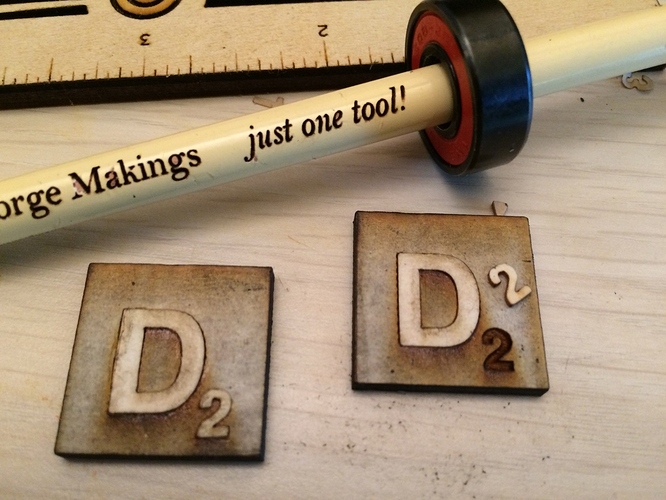 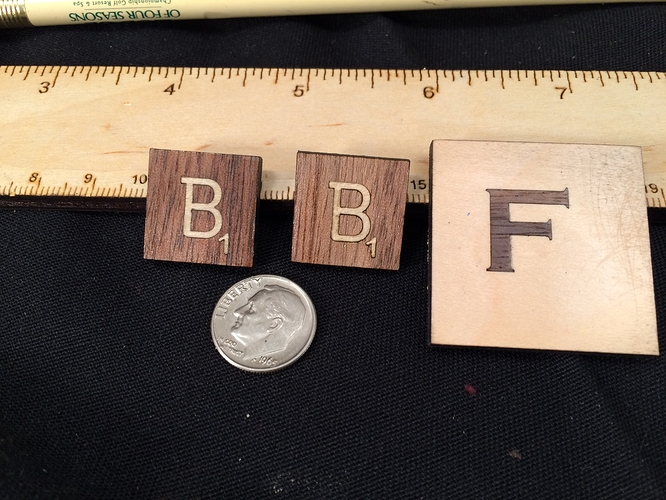 but careful placement of the focal point makes the kerf so blasted small,

I’ll have to try this a little with the veneer and the engraving with the focal lengths.

I had to call in some help yesterday to finish the tiles. That was a long and tedious process. About three hours of work between the two of us. Still have to take the masking off and do the final fine sanding and finish but that will be at Maker Faire.

I need to make one of those roller things…that’s inspired. (I used a plain old bone folder for a rub, and it’s gotten kind of sharp after years of use.)

Ummm… my head is shaved - can you clarfy?

I need to make one of those roller things…

Make sure you use a trained roller bear!! Those wild bears are mean!!!

One would expect different stuff to behave differently for the purpose of kerfs.