My daughter wanted to do a project so we looked around pinterest and found this:

Then I had the SVG made on Fiverr (because I’m not yet that proficient with any of the design tools).

[[[Zip file removed by moderators per discussion below]]]

I also cut the fabric with the same image. I just set the inside petal cuts to ignore and cut the outside set at speed 4 . 40% Should probably have upped the power a bit as a few threads still had to be pulled out. I also found that I had to weigh own the fabric so that it wouldn’t lift and blow around with the fan on. Not sure if others found a more elegant approach. 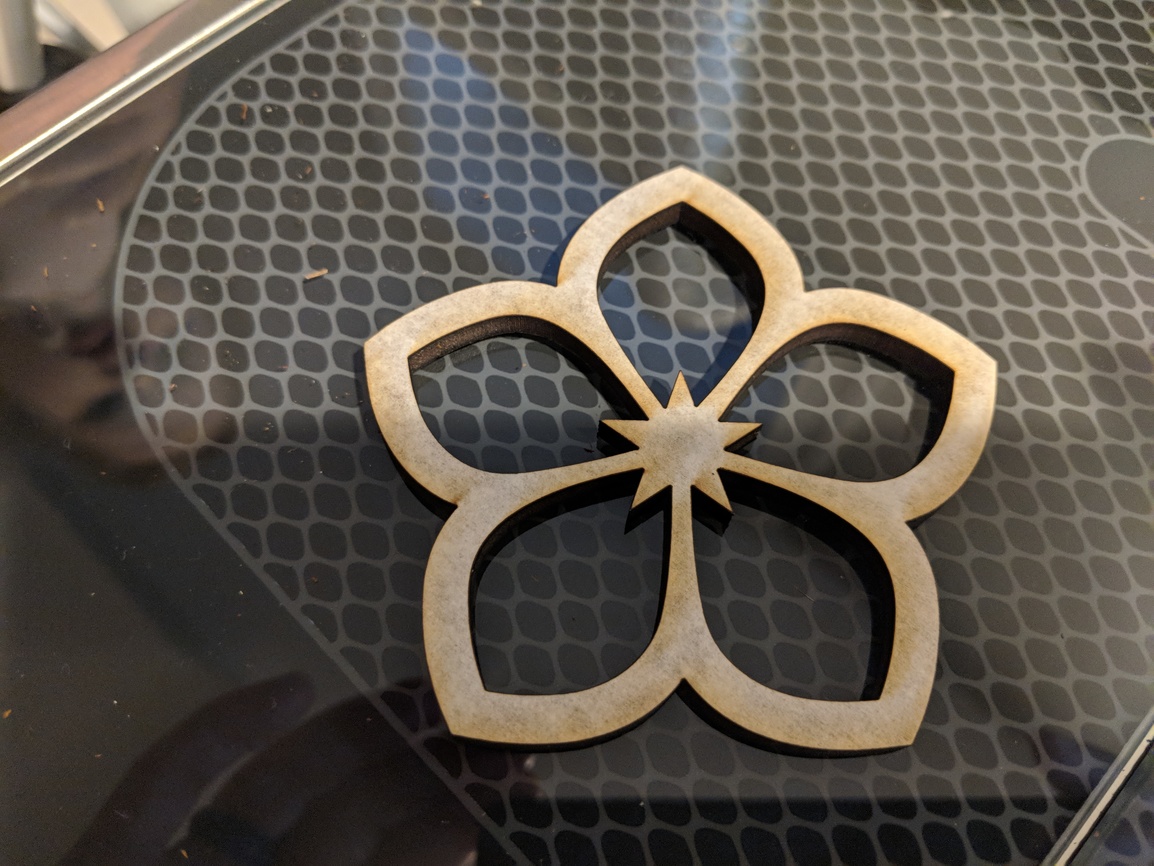 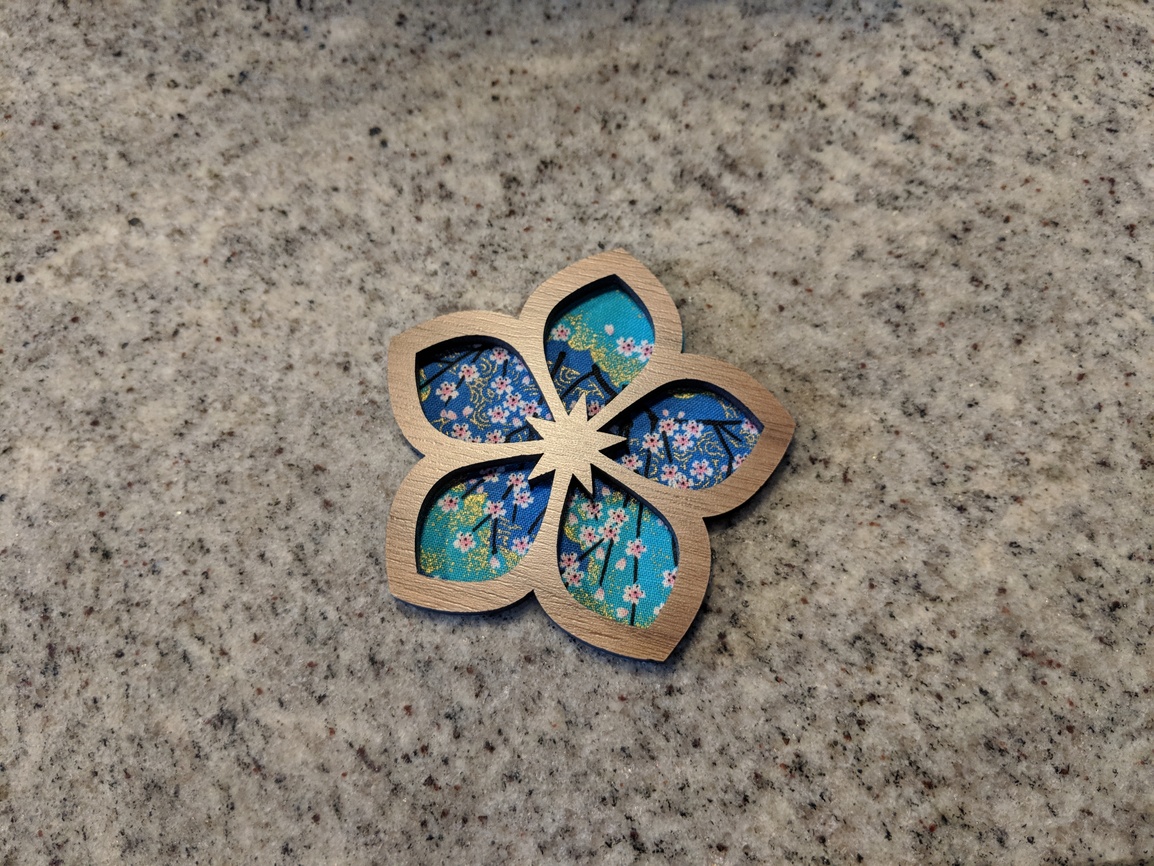 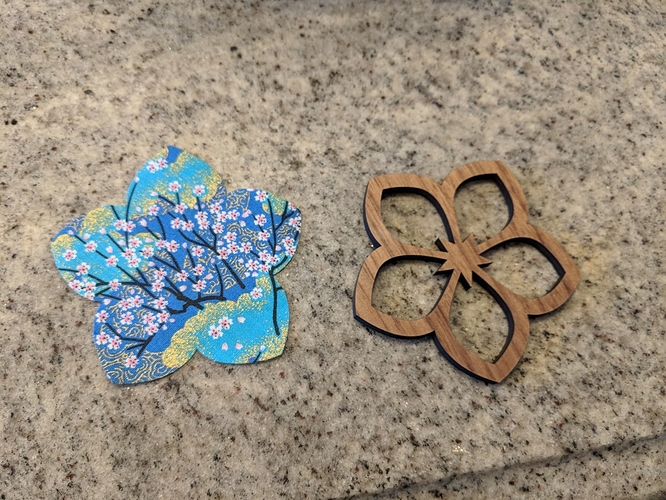 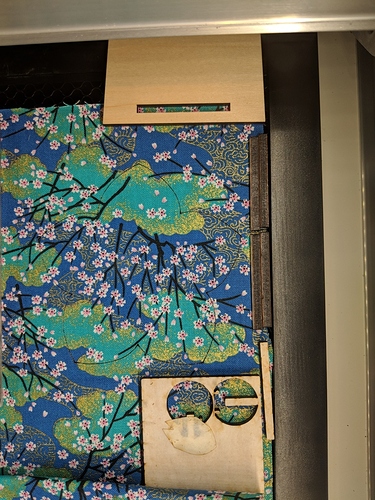 I imagine cloth would work the same as paper and light cardboard’s.

Get some ‘Krylon Easy Tack’ (or equivalent) from Amazon or a local hobby store.

Take a cutting board board or a slab of plywood to make a tack board with. Less than 12x20 will allow you to nail it down to the crumb tray with magnets or pins (just make sure it is larger than material you will be working with).

Measure the board thickness. You will add this to the thickness of the material cut, and then continue to use the values you have found that cut the cloth nicely.
So if board is 0.180 and material is 0.020, then keep the cut, engrave, score values you have been using the same and just change thickness to 0.200. You have essentially raised the crumb tray by 0.180.

Spray the board with a light coating of the Krylon (will be good for several cuts sessions) and place into the glowforge. Flatten the material on the board (use magnets or pins on excess material to keep it from blowing around).

Cut, score etc. Replace materials for additional cuts. The cut sections should stay put and can be lifted and pulled off the tack when done.

Lot cheaper then a purchased mat, and can be easily replaced if mess up and chop it.

If it were me:

Cut outline through wood and fabric

Carefully lift wood out of cut and leave the rest of the material exactly where it is.

Reinsert wood into the hole you took it from.

One thing I found cutting heavy nylon canvas anyway was that it remelted together but not very much. It was just enough to hold the small parts together and yet broke out easily. I have had a similar effect cutting sanding disks from sheet sandpaper

What a beautiful project!

Beautiful! Thank you for sharing your file!

I’m really dismayed to see this posted in the Glowforge Community.
I have to say something about this because it is a direct copyright infringement of a local business owner whom I have purchased from for years for my retail shop, and who I know to be hurt by the fact that she was copied. If someone offers a design for free to the community, it should be an original design they are releasing into the public domain, and state it as such through a Creative Commons license. Otherwise, it is a direct infringement on the copyright of a small business owner whose livelihood is supported by the design being offered here for “free”.
The artist in question wrote an entire blog post about having been ripped off. You can read it in its entirety here: When you can’t come up with your own original ideas…
If an artist offers a design for free use, they will state that. If they do not, please do not pay someone to rip off their design and then offer it “freely”.
She makes her living from her designs and the output of those designs. If you copy her design, that is a copyright infringement of her design work - as well as directly affecting her livelihood. She and her husband have built a successful small business over the last four years entirely based off of a laser cutter they run out of their home - and their original designs made entirely by them.
It’s really upsetting to see their artistry and hard work offered for “free” as a total duplicate of something she’s sold for years as original creations.

This is not coming from Glowforge, they don’t monitor the forum for this. But I would suggest that you have your friend submit a DMCA notice to Glowforge to have it taken down. They’ll remove it if she submits a claim, but she’s the owner, so she’s the one with the right to ask that it be taken down. I’m not sure they can do it at a friend’s request, they probably have to hear from the owner.

Most beginners don’t know any better, they’re not out to steal ideas, they’re just excited and don’t usually think about the impact on a small business. But your friend is probably going to need to make some modifications to how she displays her work as well to protect herself from now on. I like to suggest the addition of a watermark or patterned background in photos to make auto-trace difficult, and never shoot a straight overhead photo, shoot at an angle with the item partially obscured.

We went through something similar with the blossoming of the digital cutter market, and I’m not trying to slough this off, I’m just saying…this is only the beginning, and you can’t exactly try to shame everyone - there are thousands, and there will be more, and people generally don’t read beyond the free file notice. Have your friend ask to have it taken down, it’s probably not going to get anyone into trouble if they didn’t know.

And make a suggestion or two to her about obscuring her work so it’s less easily copied. It’s what worked best for us the first go round.

Downside to selling on the internet.

And really yes ideas get copied and there are perhaps ethical issues about some of those copies … but a lined flower cutout is not a unique concept, and the flower design is different. Transformative? I don’t know, but it is clearly a different design.

I’m short I have no idea what I’m talking about but I don’t feel like this is a clear case.

and the flower design is different. Transformative? I don’t know, but it is clearly a different design.

the fabric is different. but it’s clearly copied. the OP even basically said he paid someone to copy it for him on fiverr.

The idea is definitely copied but the flower is not the same is what I was saying.

Copyright is automatically assigned upon creation of a work. Filing for it just helps with the legal process.

@fred.shilmover I have to agree with the above post. I think perhaps you could take down the file out of respect for the original designer. I don’t think any of us would want someone to do this to us, so it’s common courtesy for another maker/artist.

The idea is definitely copied but the flower is not the same is what I was saying.

it’s substantively the same. any variations are very minor at best, and some could be chalked up to photographic angle distortion. plus the intent was clear.

Learn What Automatic Copyright Laws Protect And Do Not Protect

Learn about automatic copyright protection, in which, under U.S. copyright law, a work is automatically protected by copyright when it is created.

Yeah. Good points. Still I hesitate to say that merging two relatively primitive shapes should really be protected under copyright law. This concept is so simple, it just seems too broad. If I draw a circle, am I infringing on anyone else who drew one before me? Is anyone who does so afterward infringing on me?

I’m just saying there’s a line somewhere, and I don’t know legally or morally which side this one is on.

i don’t disagree in broad principle. i don’t think this would be an easy copyright claim to make.

that said, i think it’s incumbent upon the users here to call out situations that are borderline, at best. the OP essentially said he paid someone to copy an existing design. that’s questionable to some, but lots of us have reverse engineered something for our own use. but to then post that as a free design for others? to me, that’s crossing a line.

Totally agree on the posting part. I wouldn’t have done that.

Copyright isn’t as simple as saying that two shapes aren’t EXACTLY the same. First of all, the shapes are recognizably the same. Second, they are used for the same project. He didn’t take the shape and use it on a leather journal. Lastly, he clearly stated that he copied the design with the intent to use it as the same project. I’m pretty sure that’s a clear cut case right there.

But to me what’s really important is that he took someone else’s design, copied it, and made it freely available. I’m pretty sure that’s against GF TOS and if he had purchased it from her directly and shared it on here without her permission, he’d also be asked to take it down.

Anyway, as a community, I think we should speak up for these sorts of things. I believe that a lot of people (and this case seems like one) do this innocently without thinking of the potential harm. We can’t claim copyright on her behalf, but we can say something and/or flag posts that fall in this category.