I am fairly new to lasers. I started using them in the past year, I am currently using a Gravograph LS900 60w laser available at my work and was wondering what kind of masking will work the best for lasers. I have used basic masking tape as well as paper transfer paper that my wife uses on her sillouhete vinyl cutter. None of it works well and the laser dosnt seem to penetrate it very well, however I can engrave into hardwood at 50% power and 80% speed down to almost a 1/4 of an inch. Can anyone help? Or am I doing something wrong?

14 Likes
Masking material for non-proofgrade items
Supplier of Adhesive Sheet
In search for a protective paper to prevent burn marks
johnwills December 21, 2016, 1:48am #2

I’m new to lasering, too, but I have been reading these forums for over a year. The topic of masking has come up several times. I suspect others will post links to some of the other posts. Until then, you can take a stab at using the search feature on the forum. It’s pretty good once you get used to it.

I use the paper transfer tape for masking and it works well with my 30wt…maybe the stuff you have is too thick??
Describe what you mean by doesnt do well…if you can engrave that deep into hardwood, it should totally obliterate the tape layer without any effort.

I picked up a roll of this Perfectear tape at Signwarehouse:

(Problem with vinyl transfer tape is it’s much too high tack and thick for masking. Great for transfer of vinyl bits though.)

There is this. I don’t know how it works but I’ve been dying to try it. Send me a laser and I’ll test it out and report back.

I have used masking tape but mostly use blue painters tape. No issues (except weeding afterwards and that’s solved by using some Gorilla duct tape). Is the laser properly focused? If I think about it I may bump the power up 5% or slow the speed a bit but I usually don’t

so the tape really doesn’t make much difference.

Don’t use transfer paper so can’t talk to that except that other laser folks I know haven’t mentioned it being a problem for them.

I have access to a CO2 laser cutter at work, and I’ve used the kind of painters tape they make for 3D printing beds. It’s the same as regular painters tape, but it comes in sheets, rather than rolls, and is much wider, therefore saving you a lot of trouble in applying!

I found that it works pretty well with plywood, getting rid of the darkening around cuts. Cutting speeds and power don’t need adjustment, but if you’re engraving through it make sure to adjust speed and power, as the laser is going to have to burn through the tape first.

Here’s one of the previous threads aboot masking…

Protecting Fragile Materials Everything Else

I was wondering – has anybody found anything gentler than painter’s tape to protect materials going into the laser from smoke damage? I have a few projects I want to work on that involve A) Paper B) PETG Applying painter’s tape to paper is obviously a problem because it doesn’t come off. With the PETG I can easily remove the painter’s tape after lasering, but the tape is so thick that it messes with the laser settings (and PETG warps like crazy under anything but the lightest power.) I’m ho…

It dosnt seem to burn away and leaves a lot of residue in the engraving portion. I would expect it to just disappear just like the wood does as it engraves but it dosnt seem to. I think it is more of the glue than anything. I primarily want to be able to engrave with the masking and be able to paint it while the masking is on, and also minimize the amount of smoke that gets on the wood(I have minimized most of this adjusting speed and power). Just looking for something that works for y’all and is in wide sheets like the vinyl transfer paper. I am looking for 12-18" wide rolls if possible. The bed of this laser is 24" x 24" with adjustable z axis so I am putting fairly large items in it.

I wanted to try the liquid stuff too.

I have used basic masking tape as well as paper transfer paper that my wife uses on her sillouhete vinyl cutter.

There are many different tape manufacturers, you may just need to change product-lines, or brands. A lot of the paper-based transfer tapes for vinyl lettering look the same on the roll, but the paper and adhesive formulation can vary a whole lot.

The masking on the ProofGrade is thinner than masking tape. It has more of a cloth feel to it than the plastic feel of masking tape. The adhesive is somewhat like a film that is tacky but very smooth. It comes off the finished plywood, hardwood, leather and acrylic perfectly without leaving any indication that there has been a masking on.

The masking does make a difference for finished goods and especially for leather.

I have some walnut of my own that I prepped and might not worry about the masking since I can clean it up after the print and finish it how I wish.

When I get back in my office next week I can check the brand, but its pretty thin so Im thinking the stuff you have might be thick with thicker glue.

So I’m still big on materials other than

though I will be using quite a few of those, I am sure. Since masking is sometimes very useful with

I am curious which, if any, of these products have been used by beta and pre-release users in conjunction with materials other than

and how well did it work? 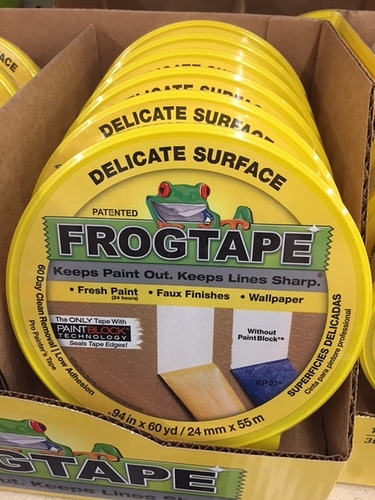 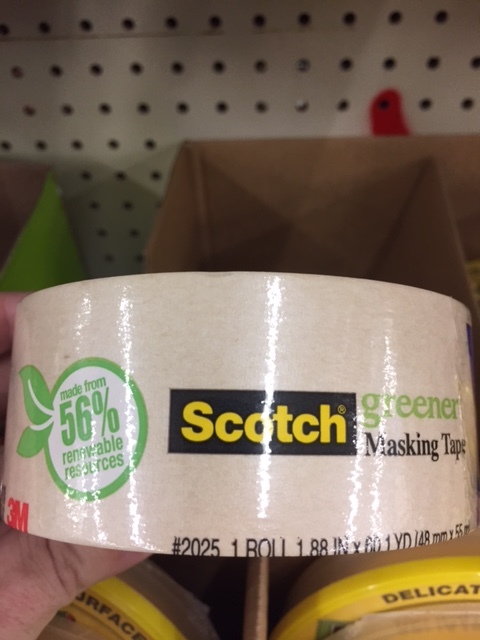 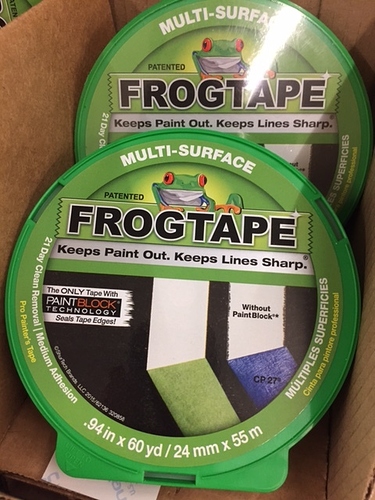 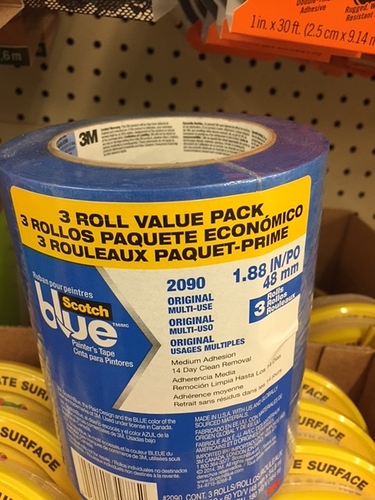 The Blue Masking tape will also work and it’s a lot cheaper.

(Also use a lot of the Scotch ATG 714 tape gun with double sided adhesive. Well worth the price of the gun if you do a lot of paper work or other light materials. Holds it down and can be rubbed off after, or just used to adhere the paper to whatever you are going to stick it to.)

Good to know. These are very common at local stores, and I was hoping that they, especially the Frog Tape, would work well for masking when not using

Now I just need something that allows me to store specific presets retrievable by custom QR code.

I use the frog tape more for holding down papers at the edges and trying to keep jigs from moving around.

If you want to use a masking tape - you can buy a roll of paper masking tape (like 12 inches wide) a whole lot cheaper than the frog tape.

It’s not as tacky either, which you want for removal.

I would link you to the stuff I’m using, but it actually is a little too light on the tackiness, and I’m going to need to find one that has a little more sticking power.

I’m sure between craft and home stores, I can get plenty of cheap paper masking, too. I guess some of it will be guessing and testing for preferences, too. I expect to have a LOT of fun once I get everything worked out for my apartment and am

@jules, have you tried using a squeegee (you should definitely have one of those

) or credit card to smooth down that less-tacky tape after you apply it? I have a big roll of something similar that I thought wasn’t tacky enough until I started doing that. If you do that, it won’t peel up until you are ready–performs pretty much like the Proofgrade stuff. You do have to put a little elbow grease into the squeegee-ing.

8 Likes
Tips For the Inexperienced
next page →