Hi folks,
Today I tried my first non-PG material, a piece of white ceramic tile. The print head is scanning over the areas where it should engrave, but the laser is not firing.

It’s a greyscale raster image, mostly black-and-white with high contrast. I’ve measured the tile with calipers and it’s 0.28 in thick.

Have I botched something in the settings? I’m eyeing that “Min Power” setting with suspicion. 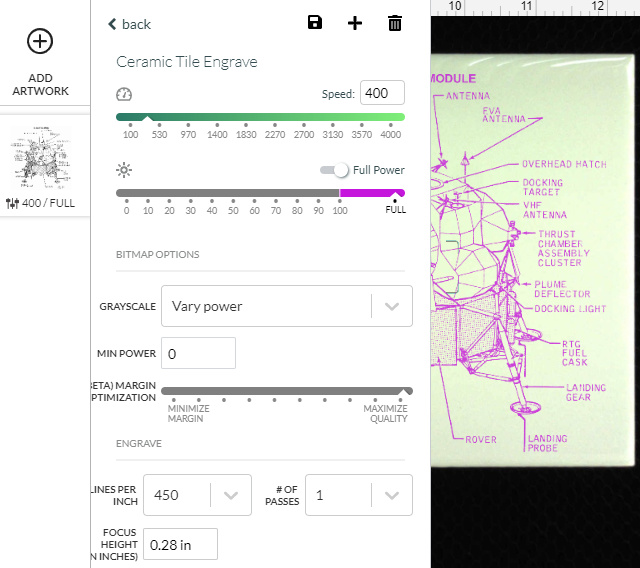 It looks good to me

Question - are you sure it’s not cutting at all? Tiles often don’t look like anything has happened, but if you run your finger over it you can feel that the glaze has been disrupted…then you colour them with paint or a marker and you can see your design.

If you can’t feel anything at all, try slowing it down.

Perfectly smooth to the touch, and not even a flicker in the tube. I’ll try slowing it down, but I don’t see any indication that the laser is firing at all, which makes me nervous.

I did cut it off fairly early, though.

If you have spare tile I’d suggest making a black square (like 1") and sending that with your same settings. You’ll know immediately since it’ll be a solid engraved box. Figure with the image you have you’re only getting tiny dots done until you’re more than an inch up from the bottom…

If you don’t have a spare tile, let it go further. If it’s not doing anything you won’t lose anything but time

Django Reinhardt Tile Made on a Glowforge

[image] I had a gift exchange at work and my recipient is a huge fan of Django Reinhardt’s music. Since a guitar was outside my budget, and he already owned all the records, I decided a copy of the memorial plaque from Reinhardt’s house in France would work perfectly! [image] I would have given up after the first few engraves if not for this thread because out of the machine it looked like this: [image] and lastly, I delivered it with a stand from @Janerlea’s pattern (Free Art / Book Stand)…

Wow, that’s quite a change!

I’m not sure why the other bitmap isn’t engraving, but I’ve included a miniature version of it on this job, so in 20 minutes or so I’ll see if I get the same issue.

Thanks for your help, @deirdrebeth!

OK, the test pattern and miniature versions worked beautifully, and now I’m salivating over how good this looks.

I’m beginning to think I just cut it off too soon. Having read the safety warnings a little too closely, I tend to hit the panic button the minute something looks like it’s misbehaving so it doesn’t fire laser death rays through the walls and then explode in a massive fireball.

I’ll try this again on the full-size version, with the Patience setting turned up higher.

I’d recommend “convert to dots” rather than “vary power” when engraving tiles. Vary power is more for when you want a 3D effect, which you can’t get with tile. I think they come out looking better with convert to dots.

You may have cut it off too soon, or you have an image on top of an image. I don’t know what happens if you have a raster over a raster, but if you engrave a vector fill over a vector fill you get a moving laser head with no lasing.

That will make a great tile.

@geek2nurse: I plan to experiment with different settings. I personally dislike the halftone effect, so I’ve shied away from the “convert to dots” and “convert to pattern” settings. I see the 3D effect on the test engrave, so I get what you’re saying about it being less applicable to tiles.

@caribis2: I started a new project and it started firing right away, so I don’t think the issue was cutting it off too soon. I’m scratching my head on that, but as long as it’s working, I’m a happy camper. No stacked images on that, by the way, but that’s good information for the future!

My wife is a systems engineer in aerospace, so I thought I’d make a set of ornamental tiles from NASA diagrams and schematics for her. So far, they’re looking pretty hot.