I happened to catch this episode on SarbarMultimedia’s Youtube channel where he discusses laser power meters and his plans to make one. The fabrication seems to be pretty simple though calibration might be an issue.

Has anyone here thought about acquiring or making a laser power meter for their GF or other laser cutters? 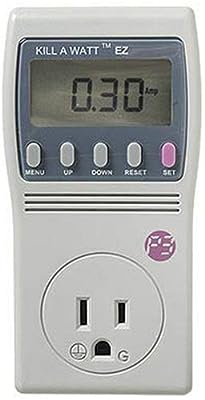 Now you can cut your energy costs and find out what appliances are actually worth keeping plugged in. Simply connect these appliances to the Kill A Watt EZ, and it will assess how efficient they reall ...

Sorry - I left out the link.

The device is intended to measure the power put out by the laser beam, not the power consumed by the entire machine. So far as I know, GF doesn’t integrate this sort of measurement. It’s probably not a “must have” accessory for most owners but I like to measure things like output power and think that it might be a useful tool for the GF down the road if only to monitor how output varies with time. It might be useful for determining the effectiveness of cleaning mirrors or windows or checking performance after other maintenance procedures, like tube replacement.

the Kill-A-Watt is a great tool if you want to lower your energy consumption/power-bill. See how much power ($) you waste by leaving your phone charger plugged in all day at home while you are off at work, or how much the entertainment system sucks down while “powered off” but still plugged in. It is a lot easier to change your habits when there is a direct cost benefit with minimal additional effort.

I use these at work and at home, love them. and they’re so cheap now!

I agree that the Kill-a-watt type products are handy, but they only measure the power that goes into the laser cutter. The meter that the video discusses measures the power produced by the beam itself and that’s what I’d like to do. Power consumed by the cutter is not necessarily proportional to the power applied to the work piece.

Has anyone here thought about acquiring or making a laser power meter for their GF or other laser cutters?

I’d like to get one. I also like to take my own measurements instead of assuming everything is hunkydory just because nothing has gone wrong enough to cause a problem.

A/the Trotec rep in my area said he’d test my laser for about $100 the next time he’s in Albuquerque. I told him I was very interested, but it’s been a few months and he hasn’t contacted me. I get the impression that post-sale support isn’t his forte.

If I could buy a meter that I could trust for, oh… $300 I would probably just go that route. I’m watching that video now - good stuff!

It looks to be pretty simple to make. The only tricky part might be the anodizing but that’s not really a big deal. The trick would be calibration and the Trotec guy could be helpful there. If nothing else, though, readings when the GF is new should be a good basis for comparing later readings.

Very thoughtful post @MikeH. Yep, the laser power meters are very simple items to make. For our purposes, measuring GF output power over time, you would simply measure output changes over time. Calibration of the exact measurement isn’t necessary (unless you’re a perfectionist like me). It is important to choose the right materials for the measurement head that will be lasered with the 10.6 micron beam from the GF. Also, measurement heads change over time too (a little). - Rich

It might be useful for determining the effectiveness of cleaning mirrors or windows or checking performance after other maintenance procedures, like tube replacement.

I have one for just that purpose. And for checking power over time to see if the tube is dying so I can be proactive about getting a spare tube before it hacks up its last buzz.

I guess I’m a bit of a perfectionist too, as I’d like to know the actual watts of power output by the tube and after each mirror. As you say though, relative readings are better than nothing.

Russ in that video recommended smooth anodized aluminum, presumably colored black. Do you have any suggestions along those lines or for the probe dimensions?

@jamesdhatch - whose probe and model did you buy or acquire?

The GF will mark anodized aluminum (black will turn light). So it doesn’t matter what color you start with. Don’t use any shiny metal, because that would lead to some nasty specular reflection. Other than that, the purpose of the aluminum is to not be damaged by the laser and transfer heat to the sensor. Aluminum does that well. - Rich

Thanks - I wondered why he had suggested an anodized surface; maybe he didn’t - I should check that.

He definitely did recommend using an anodized surface. His wasn’t getting bleached though. I’m guessing the unfocused beam doesn’t have the power density to change the color.

Personally, I think I would make the target much smaller. I would guess less thermal mass would lead to more consistent results.

A disc with the same diameter of the mirrors should be big enough.

whose probe and model did you buy or acquire?

A Mahoney Laser Power Meter. I got the one that measures up to 100W. Google shows a number of sites that sell them.

He definitely did recommend using an anodized surface. His wasn’t getting bleached though.

My commercial meter has a black anodized block to put in the beam path. It doesn’t get color changed or etched from the beam.

Specifying an anodized block is likely as a way to make sure it’s got a corrosion free uniform surface that will stay that way.

His wasn’t getting bleached though.

I speculate it was because the beam is not focused at that point exiting the tube.

A Mahoney Laser Power Meter. I got the one that measures up to 100W. Google shows a number of sites that sell them.

Thanks - Google found one like that by Mahoney at Bell Laser for $105. For that price it isn’t worth trying to make one. On second thought, maybe make one with a digital temperature display and use the Mahoney as a quasi-primary standard.

Google found one like that by Mahoney at Bell Laser for $105. For that price it isn’t worth trying to make one.

Kind of my thinking. Just because I can make something doesn’t mean it’s worth the time & effort any more. I don’t expect I’ll be on my deathbed in 30 years wistfully saying “now I wish I had spent some quality time making a laser power test meter”