I have been doing lots of engraving on cardstock and the same problem keeps happening. The laser seems to lose power during parts of an engrave. Sometimes the power just keeps decreasing, but sometimes it comes back up like in this picture. Anyone else have this problem? 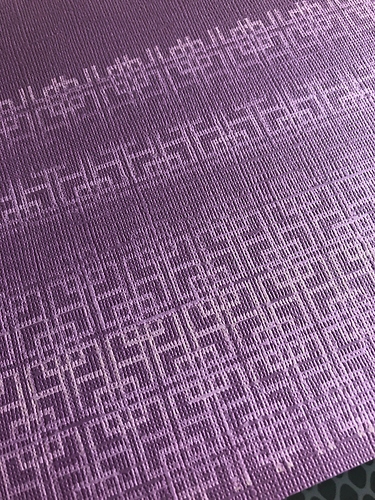 You’ll want to run that test on Proofgrade material in order for support to be able to help you.
(Too many variables on non-OEM materials. )

This will help troubleshooting rule out artwork related or if some mechanical issue.
And take photos of the paper on the crumbtray and/or of the GFUI for each test so able to confirm their location/orientation.

It doesn’t seem to follow the artwork or the location. I’ve tried several different designs at different positions, even the same design multiple times, and the fading always sets in at different points. It’s always in bands all the way across the image horizontally, never vertical or just in spots.

Support can’t help with prints on non-proofgrade materials. They will ask you to run the Gift of Good Measure on Med Draftboard to determine if there’s an issue.

What I see in your image could be a variation in the material. I’m not saying it is, but if you look at posts about engraving on bamboo, for example, you’ll see very similar variations across different pieces of the lamination.

The GOGM on draftboard might give you a sense of things but might not be a good test for your issue. One thing to assist in differential diagnosis: is this design a bitmap or a vector engrave?

Can you notice it in smaller engraves or only bigger engraves?

Does it manifest itself in any form of cutting, such as a long series of intricate cuts that might take a while?

What are the sources of your design files?

The problem might come from many different sources. Sometimes it is hard to isolate one factor. But it could be something wrong with your Glowforge for sure.

material variation was my thought too. Like laminated bamboo cutting boards but not so marked.

This is cardstock–and my own experience is cardstock has the least variation–BUT on the other hand, this is highly textured!!

@theflaskathand, does this pattern do the same thing on smooth card stock? (and of course do run the test with the gift of good measure, as @marmak3261 suggested.

Are you doing anything to hold the cardstock down during the engrave?

twas the texture that got me guessin this way.

I understand we have to reproduce problems on Proofgrade to get help but that can leave people like @theflaskathand out of luck.

Say that machine actually has a weird problem where there is a minor power variation. Well, AFAIK there is no Proofgrade material that comes with a setting that is doing the low power engrave demonstrated on this cardstock. Maybe this issue is real but only manifests at very low power… Is it even possible to prove it exists to the company’s satisfaction?

Anyway as others have said the first step is to determine if this could possibly be a problem with the artwork. @theflaskathand if you can post your art and settings in a Beyond the Manual thread, someone will surely try it out.

If art and then material variation are eliminated and it can’t be reproduced on a pre-set PG engrave… maybe the company would help if it was manually reproducible on PG masking paper?

I tested that same pattern in the photo on a piece of PG draftboard and it printed perfectly. Then I tried it on the paper again, but it has the same problem in a different spot.

@marmak3261, I’ve been using .jpg and .png files. I also tried an .svg just now and the same thing happens, again in a different place on the pattern. I’ve just been using patterns from Vecteezy that I’ve modified in Photoshop. I haven’t tried any intricate cuts or smaller engraves yet, but I’ll crop the pattern smaller and try it.

@bansai8creations, the same problem does happen on smooth cardstock.

@GrooveStranger, I was wondering if it had something to do with the low power level. I’ve been using speed 1000, power 10 on the paper.

You probably already have this covered but, just in case: my Seklema mat does not always lie completely flat. I usually have to tack mine to the crumb tray with magnets. If you tap on the mat at different points, you should be able to tell if there is any gap between it and the tray (by sound, if not feel). At low powers, being a little out of focus in a given spot can cause the symptom you are describing.

@GrooveStranger, I was wondering if it had something to do with the low power level. I’ve been using speed 1000, power 10 on the paper.

What are the rest of the details? (like, is it a vector file, or is it a bitmap file with Map Gray to Power turned on, etc etc.)

If it were me, this is what I would do next… try to engrave that same pattern on a piece of copy paper. Find a way to stick it down to some scrap cardboard or Draftboard. If 1000/10 like you did on the cardstock is too much to mark the paper without roasting it, dial down the power.

Copy paper won’t have any kind of surface variation as we have theorized the cardstock may have. If the artwork still has banding on the copy paper, that would be interesting and then we would have to scrutinize the file and the exact settings used. (I can imagine a scenario where you’re engraving a bitmap with variable power and a grey level variation that is not obvious to the eye, but does show up in the engrave.)

I tried it as a smaller version on copy paper; still having the same problem. I had been using bitmap files but this time I used a vector and got the same result.

Repeated the copy paper test. The design still faded but again in a different place, so I don’t think it’s related to the artwork.

That is pretty interesting. I am sure other folks will have some ideas, but it doesn’t sound right to me. I wonder if your unit does have a problem. Not sure what else could explain all those observations.

if it prints OK on PG draftboard, then it is either the paper or the paper is not flat. probably not flat.

I tried it on PG draftboard with the lower power settings (500/10) and got more power variations, although this time the design started out faint and got stronger, which is the opposite of how it has been.

Also did a test with an engrave in two separate steps, a border and some text in the middle. The border was faded in the middle. The text turned out just fine, even though it went across the same area where the border faded. That tells me it’s not the paper, the location, or the flatness.